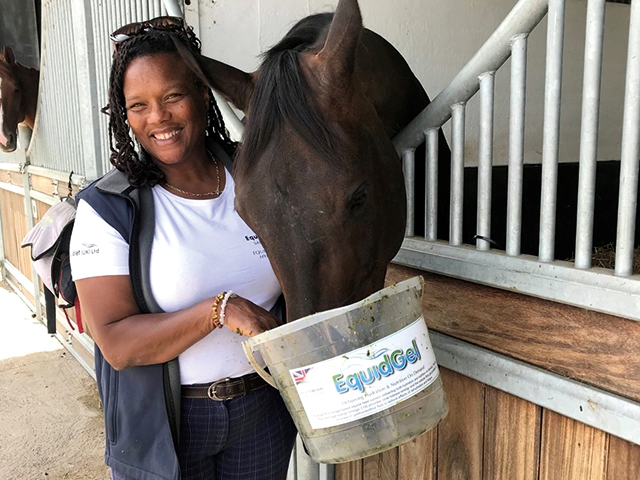 You can lead a horse to water, but you can’t make it drink – so the old saying goes, but never one to be deterred by the seemingly impossible, Sandra Murphy has come up with an ingenious solution which, she tells Kate Chapman, has got her horses returning to the drink trough time and time again.
Drawing on her own experiences the Lincolnshire entrepreneur has created EquidGel – a revolutionary hydration and nutrition system for horses, which appeals to the animal’s natural instinct to forage.

And now after refining the recipe for her liquid feed and securing a patent for her product range Sandra, of Caistor, is working hard to spread the word about her company Equidiet (UK) both at home and overseas.

“One of my own horses suffered severe dehydration after a day’s hunting,” explains Sandra, who has been passionate about horses since childhood, “there was nothing around at the time that I could give him, apart from a bran mash, but it was difficult to administer as he just wouldn’t eat or drink anything.

“The vet had to nasogastric tube him and put him on a drip, which was very distressing for the horse and for me and I honestly thought he was going to die.

“I vowed to find a solution and it took me another twenty-seven years, but I had a real eureka moment in the middle of the night a few years back.

“I made this concoction up at 3am in my kitchen while wearing my pyjamas and literally took it straight out to the horses.

“There’s the saying you can lead horses to water, but you can’t make them drink – well I did, even though they weren’t thirsty. They downed ten litres!”

Sandra, whose parents are from the Caribbean, grew up in London before relocating to Lincolnshire.

Although she’s always loved horses, Sandra decided she didn’t want to work with them as she felt that would take the fun out of her favourite hobby, so after taking a job as a saddler she joined the RAF where she spent twelve years as a driver, travelling the world.

During this time she represented the RAF in showjumping, dressage and eventing and was one of the founder members of the Joint Services Equitation Centre, in Middlesex.

Mum-of-two Sandra’s first foray into the world of business came after leaving the forces, when she invented a swimming support for pregnant women, which led her to seek funding on the TV show Dragons’ Den.

Sadly, she didn’t secure any backing and eventually went on to burn all her products, but the experience taught her a valuable lesson.

“When you’re bringing a new product to market you need to be educated in that area – and baby products weren’t my area!” she says, “and that’s one of the main reasons the support didn’t do as well as I would have liked it to, and why I couldn’t sell it.

“I spent a while feeling very sorry for myself and then I realised what I needed to do – and I drew up a five-year education plan. I had to get qualified.”

Sandra, who left school with just one CSE, went back to college and gained four GCSEs in English and maths, and then went on to study for her A-levels. After completing an access course, she gained a 2:1 Equine Sports Science degree from the University of Lincoln.

“I kept thinking back to how I could have helped my horse all those years ago and I started to put this preparation together – I needed to come up with some way of suspending fibre in water,” explains Sandra, “so even those horses who had bad teeth and broken jaws would be able to drink it too – and then in 2013 the idea came to me in the middle of the night.”

Horses don’t like to take fluids on voluntarily; they always prefer food over drink as their instinct to forage is strong, according to Sandra, which means they can often dehydrate.

She has created a liquid feed which can be given as a daily ration containing only natural ingredients and which is high in fibre, full of vitamins and minerals while remaining low in sugar and starch. Developed alongside veterinary surgeons, EquidGel also has high levels of Omega-3 oil, which provides slow release energy to support the cardiovascular system while the soluble fibre gel helps reduce the effects of dehydration and fatigue.

The solution is also a good form of nutrition for horses prone to laminitis and ulcers.

Sandra launched Equidiet (UK) in 2014 and has since invested £37,000 of her own money to help get it off the ground. She uses natural products – such as alfalfa – from Lincolnshire farms and everything is made at a factory near Tattershall.

Last year she became only the ninth black female in the UK to receive a patent for a product – an accolade she is extremely proud of.

Sandra says the Equidiet (UK) range is suitable for all horses whether they are showjumpers, dressage competitors or taking part in endurance events and 10kg packs – which will make 100kg of feed – are available online and at retail outlets, shows and exhibitions.

As well as being sold in the UK they are also available in the Caribbean and Europe, including Belgium, Holland and Germany.

“The thing is now to get the brand out there more and known,” says Sandra, who employs two full-time staff members and two field sales reps.

“We’ve been working away to make sure everything is in place and now we’ve got this patent we’re in a position to start promoting ourselves more.

“We’ve also got some new products in the pipeline too, including Hydrate – a smoothie for horses, which people can mix up and give to them before a show. It can help prevent things like colic.

“It’s been tough getting to this point, both as a woman and a woman of colour as there are hardly any black people working in the agricultural sector.

“But you’ve just got to follow your destiny and I needed to do this for myself. You only have one life – you’ve got to live it.”