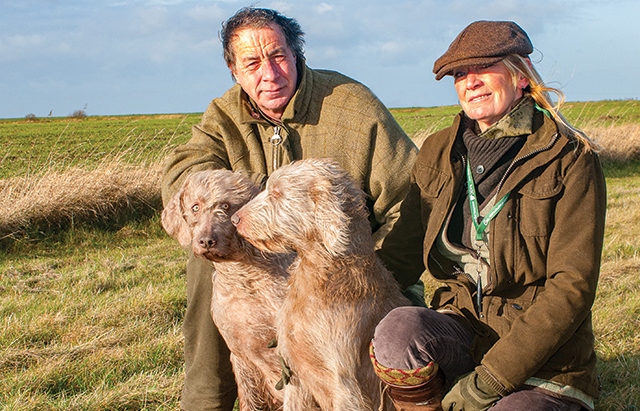 Excuse me, Sir, but what breed is your dog?

The Slovakian Rough Haired Pointer is a relatively recent breed of gundog, the result of an effort to combine three well established breeds begun in the 1950s. Its reputation has been enhanced thanks in large part to the efforts of Lincolnshire’s Achouffe Gundogs.

“I must confess that I am very traditional when it comes to a day’s driven shooting, be that working the dogs, picking up or stood on a peg with a gun. Many years ago, someone told me it was the time-honoured tradition to look the part – and you should dress for the occasion, normally in tweeds…”
Other thoughts on traditions come with my dogs, all working English Springer Spaniels. Looking back I can remember, over the years, Labradors, the odd Golden Retriever (again traditional English breeds) plus the ever-popular Cocker Spaniel.

But a lesser-known variety within the hunt, point, retrieve (HPR) kennel is the Slovakian Rough Haired Pointer, a breed I admire after working with Lincolnshire based gundog breeder and trainer Mark Hodgkinson from Achouffe Gundogs. Being far less common than many European HPRs it is not unusual to watch someone come over, scratch his head and say, “Excuse me, Sir, but what breed is your dog?” Such a question can be well answered by Mark as he, along with his partner Julie George-Ainscough, has been involved with the breed for almost two decades and Achouffe was one of the first kennels to import Slovakian Rough Haired Pointers into the country. Equally, they are no strangers to the requirements of working dogs, as Mark and Julie also breed, show, work and train Weimaraners. Plus, Julie is the current chair and secretary of The Slovakian Rough Haired Pointer Club, which she was active in establishing as a founder member in 2005.

The Slovakian Rough Haired Pointer breed was established in Slovakia, then part of Czechoslovakia, shortly after World War Two, when many working dogs had been lost and fundamental changes in the laws of hunting and farming within Czechoslovakia necessitated a dog that could fulfil this new role. Looking forward, hunters of the day wanted a dog that was obedient and easy to train, but one that did not work too far from the handler. The Czech test rules looked at thirty paces to the front and eighty paces each side. But, being HPRs, the emphasis lay on work after the shot, with a capacity for finding and retrieving game, whilst being reliable on a scent trail.

The breed originated by crossing Weimaraners, the Cesky Fousek and German Wirehaired Pointers in the early 1950s and details were entered into the Slovakian ‘experimental’ register. Only dogs and bitches of sound temperament and excellent hunting ability were bred and this was under the strict control of the Breed Wardens. Only after this was the new emerging breed registered with the Slovakian Hunters Union, who openly admired them for their working ability.

The result was a very steady working HPR dog which has the rough coat plus the moustache of a German Wirehaired Pointer and the Cesky Fousek, but retaining the classic silvered, almost ghostly coloured coat of the Weimaraner. During the subsequent development of the breed, it became noted for its steadiness and ease of training, in addition to being regarded as a one-man dog, which made it an ideal tracking dog that is still used for boar and deer hunting in Eastern Europe.

It was not until the breakup of Czechoslovakia and the formation of the modern-day Czech Republic that the breed was finally recognised and accepted internationally by Belgium based Fédération Cynologique Internationale, the World Canine Organisation often best known as FCI. On 6th June 1982 the Slovakian Rough Haired Pointer became breed number 320.

But it took until 1997 for the first dogs to be imported to Great Britain, then in the early days of the new millennium Mark and Julie began their involvement with the breed as they acquired their first young pup, a bitch they called Fen. With her, Achouffe Gundogs would go on to pioneer and champion the breed in subsequent years.

“In her life, Fen went on to have two litters of puppies and became an outstanding ambassador for the breed,” said Mark. “She was a direct result of the very first dogs brought over from Eastern Europe and went on to achieve the first Field Trial Award for the breed – taking her straight into the history books.”

One of Fen’s puppies that Mark and Julie held back and trained was Remi, who has won many accolades. “Success first with Fen and then daughter Remi has been outstanding, especially for a new and young breed in this country,” said Mark. Between them, they have put the Slovakian Rough Haired Pointer on the map here in the United Kingdom. In turn, Remi delivered her own puppies producing Mark’s current working dogs, Harbour and Rio. With such success and this background, it’s hardly surprising that their kennel, Achouffe Gundogs, has been named top breeder for many years. (Incidentally, the name ‘Achouffe’ was inspired by the small Belgian village where Mark’s late parents lived.)

But what is the Slovakian Rough Haired Pointer like picking up on a day’s driven shooting? To watch them working they carry all the traits of a typical HPR: steady and focused, gentle in nature, naturally confident swimmers and determined. Although air scenting dogs they are excellent trackers working out a ground scent before lifting their heads, as they are thorough and totally focused. They often work hundreds of yards across a field on a scent to find a runner, which they rarely fail to find. As with all HPRs, no matter how many times you witness it, there is still something captivating when they follow a scent and in the last few yards they slow, the tail comes up, the back straightens, the neck extends, the nose goes forward and a front leg is raised as the dog goes ‘on point’. Very different from my own Springers, who tackle everything on the run and never with the grace or bearing of any HPR.

Do I foresee the Eastern European gundog breeds taking over from the more popular Labrador and Spaniels on a shoot’s picking-up teams? It is hard to say, there is no doubt their popularity is continually growing and certainly they can add to any picking-up team. This was confirmed to me at a recent field training day, which had substantial support with the many breeds from Europe – a day I found hugely enjoyable as I watched HPRs working on a small country estate.

But I think there is a bigger question: will I change and get an HPR? Highly unlikely is my stock answer. I think I have ‘Springer Blood’ in my veins and I can remember a Springer running around the house from the earliest age. Plus, I still enjoy watching the excitement and energetic bustle of a working Springer running out for a retrieve or flushing and working on a walked-up day. But then I guess I am biased.

But I will always remember one advantage my Springers have over the graceful Slovakian Rough Haired Pointer. Every so often whilst out picking up with Mark I will get a shout to the effect, “Matt, come over here, I need some help, this is Spaniel country.” As I walk over, I know I will find a patch of heavy, overgrown blackthorn or thick bramble with a suspected retrieve in the middle.

Yes, that is Spaniel country!