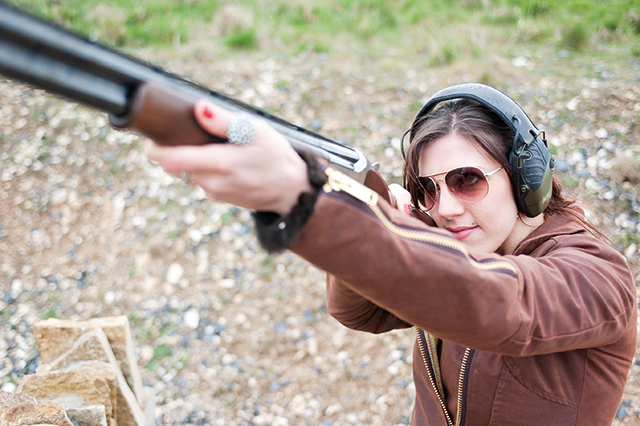 Females in fieldsports: How to get involved

Lydia Abdelaoui recently caught up with Sophie Coups of Grimsthorpe Estate Shooting Ground, to find out more about the venue and how it is encouraging newcomers, and women in particular, to take up the sport of clay shooting.
Grimsthorpe Estate Shooting Ground in Bourne opened for business in 1994. Originally the brainchild of Harold Russell, it has remained in the family, with a further two generations of his relatives now playing major roles. His granddaughter Sophie Coups (28) now takes care of the day-to-day running of the ground, promoting and growing the business, and is the main point of contact for everyone.

How did you first become involved in running Grimsthorpe Estate Shooting Ground?
“My father Mark and mother Elaine ran it full-time until the last five years, when me and my brother Rob have had a much larger input. My brother and father oversee the tuition element of the shooting ground, and although neither of them would admit it, they are pretty good at what they do! They can offer tuition from beginner’s level right through to the experienced shot. Having both achieved a number of British and International titles themselves, they enjoy passing their knowledge on.

“My mother alongside her business partner Angie runs our fantastic kitchen, named the Rookery (due to the amount of flapping and squawking achieved on the first day they took the kitchen on!) and we are super proud of the food they serve here.”

What plans do you have for the future of Grimsthorpe?
“I have large ones! We are growing our corporate element of the business, offering a fantastic activity for all businesses to introduce team building and an alternative activity for their customers and staff to take part in. I am also looking at using our new clubhouse as a wedding venue for 2019, so watch this space.”

You have recently invested in a fabulous refurbishment at the ground – tell us about it.
“It’s been huge and a four-year process. We now have alongside our beautiful woodland a stone built clubhouse that has its own bar, professional kitchen with dining room, snug and a private function room.”

Can anyone come along and learn to shoot, or do they need to be a member?
“You don’t need to be a member. Anyone can book a lesson with one of our professional instructors. A beginner gets one hour’s tuition at a cost of £50 plus cartridges. There is no limit on shots fired during this lesson, we don’t like the idea of wrapping it up because someone has had their amount of shots.”

Do you get many women shooting at your ground?
“I am so, so keen to encourage women into shooting. Having grown up alongside shooting my entire life. I am very passionate to promote it as the welcoming and friendly sport and hobby that it is. I have noticed probably in the last two years an enormous surge in the amount of women taking part. In the last registered competition we held a month ago, we had the largest entry in the ladies class we have ever had, which truly was so exciting.”

What would you say to a woman thinking of trying the sport?
“First of all do it! Find out where your local shooting ground is and book a lesson. Most grounds offer shared lessons, so why not take a friend too? Don’t be daunted, everyone is welcoming and friendly, it really is a sport for both men and women to enjoy. I would actually say that in the last year we have had a 50/50 split between men and women having tuition with us.”

Do you think more could be done to encourage women to take up shooting?
“There are obviously some fantastic ladies’ shooting groups such as Femmes Fatales that have started up in the last few years. We will support them as a shooting ground as much as we possibly can. I think the most common misconception, from a women’s point of view, that I regularly hear is that it hurts. This isn’t true! If you get yourself a proper instructor to introduce you, not just the person who has offered to show you, you’ll be shown the correct way to mount the gun which will avoid any pain from recoil. Many people have the best intentions but aren’t aware of the bad habits that can be learnt on those first few goes at shooting.”

It’s quite a male dominated sport – perhaps this might put a lot of women off?
“I love all of our shooters and I can vouch for all of them, men and women alike, we are all in the same boat and will each other on whatever level you are at. Shooters honestly are such a friendly bunch, and I would say the best thing about clay shooting is the social aspect. It must be one of the few sports where you can genuinely turn up alone and be welcomed by everyone!”

You can learn to shoot with the Femmes Fatales at Grimsthorpe Shooting School on Saturday 21st July – the event will be covered by Lincolnshire Life Magazine. Find out more at at www.femmes-fatales.co.uk or www.grimsthorpeshootingground.co.uk