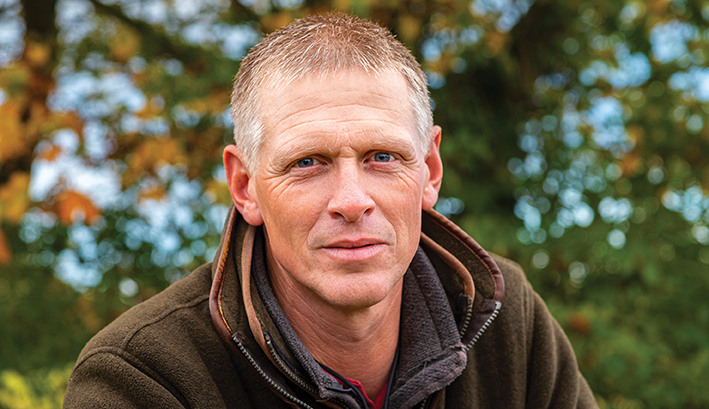 Matt Limb OBE meets Andrew Slingsby, a gundog trainer based in Lincolnshire.
I have had a lifelong fascination with man and animal working together. It started at a young age with my late father, a shepherd, who worked his sheepdogs both on the farm and at sheepdog trials. Since then I have felt very fortunate to have been involved with military working dogs during my time in the Army, plus with my spaniels who regularly work on local shoots. But even now, after so many years, I can still look on with wonder at man and his best friend working together.

With such a background imagine my delight when I was recently introduced to Andrew Slingsby. It was a name I had come across, normally when out shooting with fellow ‘dog men’ and the discussion came around to working gundogs, especially Labradors. Andrew, or ‘Andy’, as he is often known, is Lincolnshire born and bred, having lived all his life in the north of the county in the Louth area. It came as no surprise that like so many, his passion for working dogs and also shooting had been passed down from his father. Geoff was a shooting man all his life and enjoyed both game and pigeon shooting, plus there was always a Labrador at home.

Despite being a qualified joiner by trade, Geoff established a trout farm business near Louth, with the long-term business plan being for Andy to follow him into the trade; this started with a specialist course in fish farming management at an agricultural college in Hampshire. Sadly, soon after starting the training course, Geoff passed away quite suddenly and plans for Andy changed – despite which he returned to the south of England and finished his course. But the loss of his father had a deeper effect for Andy; his interest in shooting along with the countryside, including the much-loved dogs, was brought into question as it no longer felt important – it was a pastime he always shared with his father and something was now missing. It is a feeling I can fully understand having gone through much the same when my father passed away a couple of years ago, following which my gun stayed in the cabinet for far too long.

Andy soon found himself working in a local factory knowing any future on the fish farm would not materialise. After several years at the factory a work colleague encouraged him to start shooting again; not unexpectedly there soon followed the dogs. At that time Andy had a very simple plan: to train his dog to sit by his peg when out shooting. So started his passion for training gundogs. Initially, it was Murphy, a black Labrador, who also joined him picking-up on local shoots or sat with him on a peg. By his own admission Andy is a perfectionist, so for Murphy to simply sit on a peg and be steady was never going to be enough. Soon Andy acquired more dogs and competed in working tests, then with more experience was regularly taking a prize, which led to him competing at retriever championships in Windsor Great Park in front of HM The Queen.

Before working at the factory Andy met his wife, Helen, who came from a gamekeeping family. But the love of dogs and dog training was always in the background and was now shared between them. Hanrebor Gundogs started making a name in the training world; this was coupled with Andy’s intention of breeding a good, healthy but trainable strain of Labrador. Incidentally, the kennel affix, Hanrebor, is taken from the initials of family members.

For many of us, redundancy is something we might dread, but when faced with this prospect Andy looked at his life and future realistically, then thought to himself, all I know is dogs and dog training. So it became the trigger to move into full-time dog training and continue breeding his line of working Labradors, most destined to be gundogs.

As I sat with Andy, he admitted that his pleasure today is seeing other people become successful with their dogs by following his training guidance and advice. This included a local lady who was struggling with some basic obedience training but after time with Andy and periods of one-on-one training, she has now successfully gone on to win a working test for her gundogs.

But it is not all about gundogs. For one of the Labradors bred by Andy, life took a vastly different direction, with the canine becoming as an assistance dog. The requirement was for a local gent, who was confined to a wheelchair, to have some help around the house. For him to go through the regular assistance dog acquisition scheme could have meant a wait of several years and the fear was that such a length of time would be too long given the gent’s deteriorating condition. With training by the family and some self-help, it resulted in the dog being not only a great companion but also an assistance dog able to carry out many tasks to make life easier; including fetching shoes, opening the washing machine door, setting alarms, fetching pre-made snacks and helping the gent out of his wheelchair. Whilst not a gundog it was clear this gave both Andy and Helen a great deal of satisfaction, knowing that one of their young puppies had grown to make such an impact of someone’s daily life.

Today Andy spends much of his time helping people who have problems with their dogs and is quite open in admitting it is more about training the owner than training their dog. To help with this, it is understandable that he prefers to have the dog and owner visit him, so the training can take place on neutral ground and while the visiting dogs vary they all tend to be in the gundog group of Labradors, spaniels and a growing number of the newer European imported HPRs.

Watching Andy with a couple of his dogs you could sense they simply wanted to please him; his very nature being a quiet one and gently spoken, asking the dogs to do something rather than telling them to do it. Chatting with him, I asked what the most common and recurring problems were. He replied that, in the main, it was a lack of consistency in the dog’s regular development and training; this, in turn, resulted in problems, most commonly showing in the very basics of heelwork and not responding swiftly to a recall. But as Andy said there are very few issues that cannot be sorted, but it takes some effort on the part of the owner, by changing their thinking and training, following the guidance he can offer.

I don’t think I will ever become tired of watching man and his best friend working together, whatever the task – from shepherding and the protection duties of a guard dog, to the skills of an explosives search dog, or simply being at home with my spaniels retrieving a pheasant on a shoot. But for them to benefit man and for us to make use of the dog’s natural skill, strength and instinct it must be harnessed with elementary obedience training. More importantly that training needs a regular check-up and adjustment, ideally from someone like Andy who will be able to identify and correct the mistakes we all make and often cannot see.