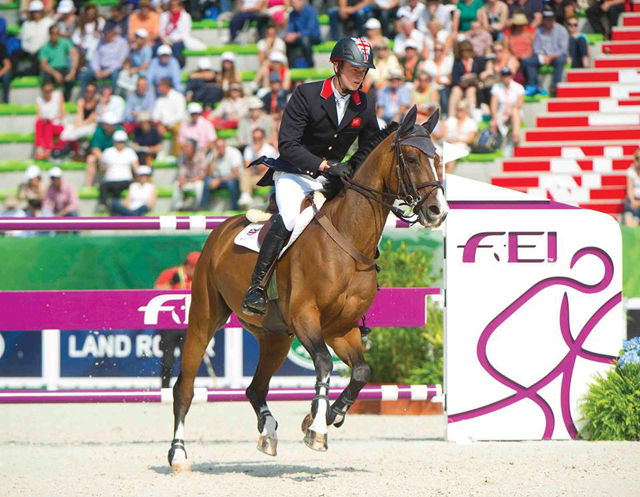 For twenty-one year old showjumper Spencer Roe, the call to international competition has come at a young age, yet the relative newcomer is achieving results beyond his years.
Spencer has been a member of Team GB for the past three years. In that time, his hard work and fearless approach to his challenging and competitive sport have already won him a place on the senior team and a reputation as an achiever of clear rounds when the stakes are high.

Team GB’s place in Division 1 of the Nations Cup Series looked in doubt until Spencer and his three teammates delivered a total of eight faults to gain second place at the Dublin round of the Furusiyya Nations Cup qualifiers in August. Spencer managed one of only four double clears in the whole competition.

Spencer was born in Lincoln and attended the Priory Academy LSST. He was at first reluctant to follow the rest of the family in their equestrian hobby but aged eleven Spencer started to compete on a pony with a sparky temperament called Foster, and his interest blossomed.

“I suppose I have Foster to thank for making me so keen to be a showjumper,” explained Spencer. “I have always been around the family business which has equine connections but initially having my own pony was to keep me occupied and out of trouble, while the rest of the family competed. We just made a great partnership and I was hooked.”

After leaving school at sixteen, Spencer went to work with showjumper Andrew Saywell at his yard in Newark, where he spent a couple of years mucking and riding out and learning how a yard works. He then went to Dorking, to William Funnell’s yard to undertake a similar role.

This experience of working with many young horses and finding what he describes as ‘the horse of a lifetime’ at the yard, fired his ambition to open his own yard in South Hykeham at the start of 2013.

The yard is home to eight horses but it is Spencer’s partnership with Wonder Why (stable name Disney) which has delivered his outstanding performances to date.

“Disney was bought by Andrew Saywell for his wife Emma originally, but I rode him at a couple of events and fell in love with him. I had him on my Christmas list but, without me knowing, my mother had already bought him. He is a bay gelding, just above sixteen hands, whom we bought as a five year old. He is eleven now, which is old enough to have dampened some of his attitude while gaining plenty of experience but he is physically in his prime and competitive like me; most importantly he is brilliant at picking his feet up over jumps.”

Spencer receives funding from UK Sport, which manages the World Class programme. Spencer was a bit too young and Disney too inexperienced to be chosen to compete for a place at London 2012, but Rio would be the pinnacle of his career so far.

Each February, Spencer leaves behind his yard and outdoor ring and relocates, with about six of his horses, to continue training in the warm weather of Spain. It’s a long drive but it helps the horses to get accustomed to being transported and settling in new stables. He is accompanied by a stable girl, and UK Sport provides a groom for the big events.

The eight rounds of the European Division of the Nations Cup are held at venues across the continent. The Nations Cup season begins in May and continues through the summer and autumn, culminating with the final in October.

Team competitions have steered Spencer’s career since he and Disney were identified as the duo who could deliver consistently clear jumps, and his call up to the senior team came at the beginning of this year.

Spencer said: “Competing at this level in showjumping is very expensive and so reliant on the fitness of horse and rider. I receive invitations to ride promising horses for other owners and I have a couple of my own at the yard that I am bringing on all the time.

“As well as my funding from UK Sport, I am so grateful to other companies who help me with sponsorship and equipment. I couldn’t compete without them and of course I could always benefit from more.”

Spencer’s name, for the moment, may not be as familiar to you as Nick Skelton or John Whitaker but his promise and results have firmly identified him as one to watch.

If you would like more information about how you can become an owner or sponsor Spencer, visit his website: www.roequine.com

LOCAL SPONSORSHIP FROM PEGASUS HEALTH
One of the local companies providing real support and sponsorship to Spencer Roe is Pegasus Health, based at Billinghay. Established by director, Mark Sharwood-Walker, Pegasus Health is a leading supplier of equine supplements and supplies. As well as its own Pegasus branded products, the company also sells over thirty other brand leaders in equine health and care.

Mark Sharwood- Walker explained why they have signed up to help Spencer reach his Rio goal and what it would mean to the company if he succeeds. “A great company needs great ambassadors, so I’m delighted that Pegasus Horse Supplements Ltd is sponsoring Spencer – one of our most exciting and talented young riders.

“The fact that the company and Spencer are both based in Lincolnshire is only part of the story, great as it is to support local talent. Spencer is dedicated, hard-working and wants the best for his horses, which we appreciate.”

You can find out more about the company and its products at: www.pegasushealth.com