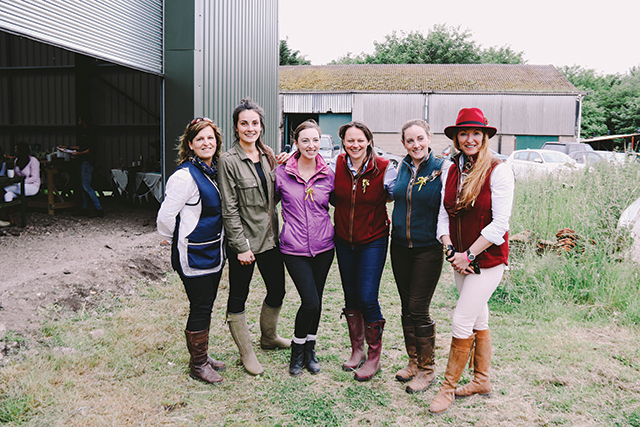 Have a hoot, try a clay shoot

Ladies, have you ever found yourself thinking you’d really like to give something a go, but are given the impression that it’s for men only and you might not be excepted – perhaps even made to feel out of place? Try giving clay shooting a go!
In what has often been misinterpreted as a men’s only sport, clay pigeon shooting is fast becoming one of the more popular activities for women of all ages. Behind the rise are organisations such as the Femmes Fatales. Founded in 2014 by a group of passionate, ambitious and independent women, it has grown across the nation to now boast over 7,000 like-minded members.

One such member, Anna Wooster (27) has recently taken on the mantle of Lincolnshire host. Having only taken up the sport last year, Anna has firmly been bitten by the shooting bug.

Anna is managing director of Greenio Ltd, a renewable energy company based just outside Sleaford. With running your own company comes great responsibility and dedication… along with a lot of stress! In getting involved in clay shooting, Anna has found a fantastic way to take her focus from the day job and spend some well-deserved quality time with friends doing something she loves.

“I have never been so excited and nervous at the same time; thirty-seven ladies to host, thirty-seven expectations but I was blown away by the generosity of gifts, cakes and personalities that brought together an amazing day. I will most definitely be hosting my next event soon.”

Her first event was held at Pinewood Shooting Ground in Blyton, North Lincolnshire. The day was a roaring success, with a fabulous mix of dedicated members and newcomers of all abilities and ages – the youngest attendee being only 13 years old.

Upon arriving the heavens had opened, but nothing could dampen the spirit of all those that had got there in time for a welcoming bacon roll.

Everyone was beautifully turned out for the occasion. From fetching feather fedoras to gloriously garnered gilets, all those that took part had made the effort to ensure the day was most memorable.

The sun soon came out much to the delight of all including the owner Alan Lawson, who, like Anna, was hosting his first Femmes Fatales event – not that it will be his last.

“I’m proud to have had the opportunity to host a Femmes Fatales event here at Pinewood Shooting ground, our instructors had a fantastic day and we hope the ladies did too,” he said.

Everyone was divided into small groups to make the day a more enjoyable experience for all and to add a little spice to proceedings, various prizes were up for grabs. Anna had managed to secure some fabulous gifts, generously donated by some very talented local Lincolnshire ladies and gents. Among the prizes on offer was a beautiful painting by the wonderful Clare Shaw and a gorgeous handmade hat complete with pheasant feathers by master milliner Hayley Pour of Hayfield Countryside Crafts.

The day was rounded off with a hog roast laid on by Hepys Hog Roast and many of the ladies had also brought along various scrumptious cakes and treats to satisfy the sweeter tooth – most noticeably the gin and tonic cheesecake, where someone had perhaps been a little generous with the alcohol!

You certainly get your money’s worth at a Femmes Fatales event and the one that Anna had so intricately planned was no exception. Plenty of shooting, drinking, eating, chatting and above all else, laughing – all enjoyed in idyllic surroundings with a friendly and relaxing atmosphere. If you fancy a change, something that gets the heart racing a little more than a facial or pedicure, why not go and slay some clay!