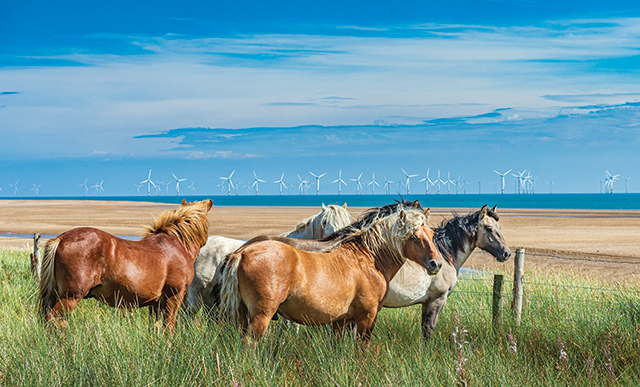 Highlands on the Lincolnshire Coast

Matt Limb never regarded himself as a horsey person, much preferring the company and companionship of a good dog. But a few years ago he stumbled across a breed of horse, or to be more exact a breed of pony, that changed this. Here he shares his story
The Highland Pony started something of a passion. As I watched this hardy and sturdy little animal working, it took some time but I soon realised that my interest lay in how the Highland Pony worked for man, in the same way as a working dog.

The interaction, bond and trust between man and animal, working together, has fascinated me for decades; in the main this is due to my late father, who as a hill shepherd trained and worked his border collie sheepdogs. But I never expected to see that same relationship between man and pony.

As a photographer I wanted to spend time capturing this relationship and that ever faithful and never questioning bond. Last year, following a chance introduction, I met a ghillie, Eric Starke, who still works in the traditional way across the Scottish Highlands using Highland Ponies to bring the hinds and stags off the steep-sided ground, much of which is inaccessible to any modern multi-terrain vehicle. Eric is one of a dwindling number that still breeds, trains and works Highland Ponies. On my return home, from my time on the hill with Eric and his ponies, now with the images I had long wanted to capture, I was surprised to find Highland Ponies here in Lincolnshire – again working for the benefit of man, plus the local environment.

Every little girl must dream of having her own pony, but for Grace Troup, that dream came true at just six months old. She was a show pony called Fairy and started Grace on a lifelong love of ponies. But over a decade passed before she acquired her first Highland Pony – Lucy of Langley, a ridden mare bred from the Langley Stud based in Yorkshire. As the years unfolded soon two more Highland Ponies found a home with Grace and her family, again both from the Langley Stud, but time with her beloved ponies was put on hold for her final years of education, followed by time at university where she studied equine science.

But that love of Highlands continued to grow, encouraged by her parents and helped by six brothers and sisters, Grace soon closely identified with the breed, the way they interact and work for the benefit of mankind in agriculture, forestry as well as on the hill with the ghillie and deerstalker. As Grace refers to them, deer ponies. With time the idea of a Highland Pony stud based in Lincolnshire was born. It came from an idea prompted by Grace chatting with her mum, Sally; soon Rumach Highland Pony Stud was founded. The name, Rumach, is Scottish Gaelic for marsh, marshland or bogland and fits with the Highland Pony Society’s requirements that a stud’s prefix must relate in some way to the stud’s local area or environment.

The first stallion soon arrived, Mac. He was on loan along with another borrowed mare, Laika, from the same Langley Stud and related to her original pony Lucy. The two, along with Grace’s own mare, Orianne, were to become the foundation of Rumach Highland Pony Stud.

The first foal was born in 2017 but sadly died within twenty-four hours. It was not a good time for Grace or Sally; it was six months to the day since Grace’s father had suddenly and unexpectedly passed away following a stroke. He had been a source of encouragement and strength for Grace as she grew up. So much of Grace and Sally’s future rested in that little newborn foal and it would have been easy to give up in such dark and sad times. But for both Grace and Sally, with help and support from family and friends, they grew in resolve and determination. With time the stud flourished as two more foals were born and survived, Seasprite and his sister Whirligig. Rumach Highland Pony Stud was alive, at last it had a future, as the new foals arrived into the world.

Today the Highland Pony conservation grazing project grows, the stud’s ponies are a regular sight for walkers on several Lincolnshire nature reserves, including Gibraltar Point. But Grace is aware that the correct selection of each pony, which essentially runs wild across the reserve, is key.

“We work hard to ensure our ponies have been well handled, they are easy to catch and move between and across areas on the reserve,” said Grace. “But, at the same time, they have not been over humanised, such as feeding by hand. So, when they arrive at a reserve, they have no defined association with people and food or treats. This helps to ensure they don’t pester the general public, footpath users and dog walkers who want to enjoy a day on the reserve.

“The opportunities for conservation grazing with the Lincolnshire Wildlife Trust are enormous for the stud. Allowing the ponies to live in such a beautiful, natural environment whilst running wild and having year-round access to such a wide variety of grazing and actively helping to manage nature reserves makes us very proud.”

Speaking with the nature reserve wardens at Gibraltar Point, they are full of support and praise for the Highland Ponies, as Kev Wilson explained: “We have used both cattle and sheep for many years on grazing projects and do not see that changing, but the Highland Ponies bring another dimension, and further benefits, to conservation grazing. The Highland Ponies’ ability to thrive in the bleakest of weather conditions with little if any supplements is an advantage, as is the freedom of movement we have with the ponies, which we do enjoy with cattle or sheep.”

Despite the relatively short time that Highland Ponies have been at The Gibraltar Point Nature Reserve it is noticeable that they eat and concentrate on the harsh, coarse and rough vegetation. They can be seen grazing around the gentler plants, so giving them a chance to thrive. This has been specifically witnessed with the Southern Marsh-orchid and a small delicate flowering plant called Eyebright, which are just two examples where the ponies have benefitted species across the reserve. Chatting with Kev, it is clear he can see the benefits of Highland Ponies in future grazing projects and he hopes for a long association with Grace and Sally; but equally he is delighted to help the Highland Pony as a breed, which is itself at risk.

Regarded as one of only two native breeds from the Scottish Highlands and Islands, the Highland Pony, standing at less than five-feet-tall, is classified as vulnerable by the Rare Breeds Survival Trust. Today as few as 8,000 ponies can be found worldwide, but thankfully foal registration has shown little decline in recent years. This is a fact that Grace and Sally are fully aware of and work with several other Highland Pony studs, often requiring a ten-hour drive to the Highlands of Scotland, to help grow numbers, so ensuring a brighter future for the breed.

Looking to that future both Grace and Sally are very clear and focused.

“The old and traditional bloodlines of the Highland Pony breed are at risk, many of them have become too closely related. We want to rejuvenate them and widen that gene pool. We owe it to this little pony that has for centuries done so much for mankind.”

In addition to the work they do in helping the breed, Grace and Sally are determined to also play their part in showing what the Highland Pony can achieve as a conservation grazer, which in the past may have been overlooked. The anticipated results at the Lincolnshire Wildlife Trusts sites can only benefit the breed by giving them an alternative modern-day role, away from the Scottish Highlands, and help promote conservation grazing efforts in other areas of the country.

Looking back over recent years and my time with the Highland Pony – from the remote, rugged and steep-sided mountains of the Scottish Highlands with Eric, to the flatlands of Lincolnshire with its sand dunes and rough grazing on one of its nature reserves with Grace and Sally – it is clear that the Highland Pony is still benefiting mankind in many ways, as it has for centuries. But I never thought I would see this here, at home, in Lincolnshire.