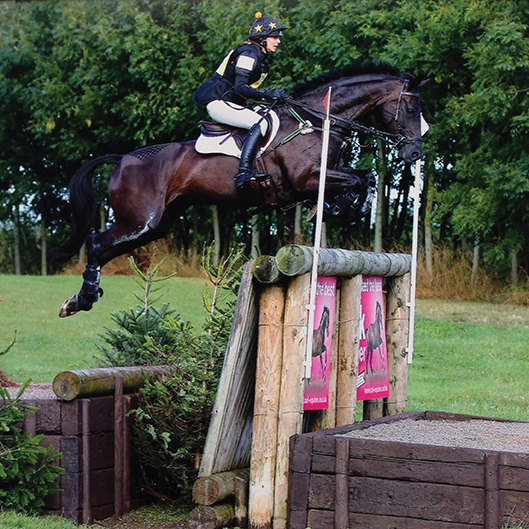 Kelly Hetherington achieved the coveted ‘Gold’ award in the British Breeding/Baileys Horse Feeds Futurity Evaluations after entering for the first time with her three-year-old gelding Britannia Rocks.
The gelding achieved a score of 8.125 for its eventing valuation from the panel of international judges, who commented that he was a very harmonious and powerful horse with a very attractive frame and very good natural balance. They also said he was a nice prospect for the future.

Britannia Rocks is by the wonderful stallion Britannia’s Mail. The motherline of this young horse is equally interesting. The dam sire Negro needs no further introduction, and behind comes the Oldenburg mare family that produced the influential stallions Welt Hit I and Welt Hit II. In the direct motherline we find some well-known horses, such as the wonderful Grand Prix mare Die Callas.

The Futurity evaluations aim to identify British bred, young potential sport horses and ponies that are destined for careers in dressage, eventing, showjumping or endurance and may even find the Olympic champions of the future. Entries are categorised by discipline with age groups for foals, yearlings, two and three-year-olds.

For the first time the British Breeding/Baileys Horse Feeds Futurity Evaluations saw breeders submitting their entries in a digital format in sets of detailed videos taken on hard and soft ground that were examined by a team of international experts, including a senior veterinarian, Baileys Horse Feeds nutritionist, linear scorer and highly experienced international evaluators from the UK, Holland and Germany.

Kelly said: “I am thrilled with this gold award because I am a complete amateur and bred Britannia Rocks, stable name ‘Charlie’, from my own eventing mare A Rio Negra. I chose the sire because of his ability to cover the ground, temperament, style and rideability. Having seen him go round Badminton, ridden by a younger rider, I felt that his offspring would suit someone of my ability.

“Charlie has all those traits and hasn’t put a foot wrong, including since we have backed him. He has been so good even when we were taking the videos for the Virtual Futurity. My friend Kerry Varley helped me with all of this, on and off the ground, I would never have had the confidence to even enter the competition if it weren’t for her!”

Gold awards qualify horses for pre-selection into the first ever Futurity Elite Online Auction, which will be held in September in cooperation with ClipMyHorse.TV