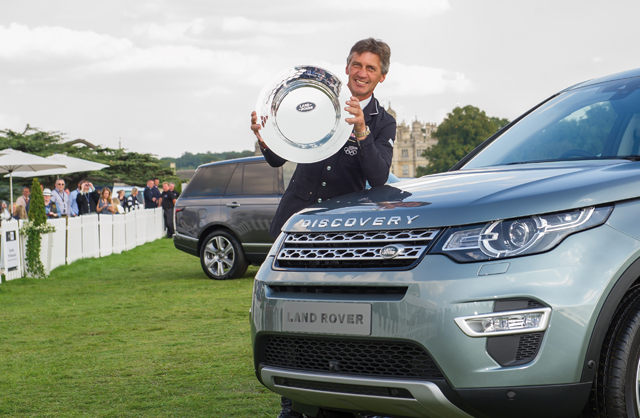 History is made at Land Rover Burghley Horse Trials

By 4pm on Sunday 7th September, as sunshine blanketed the beautiful grounds of Burghley Park, history was made as New Zealand’s Andrew Nicholson was crowned champion of the Land Rover Burghley Horse Trials for the third consecutive year – a feat never before accomplished.
As the crowd roared, a clearly emotional Nicholson celebrated with his wife Wiggy and Avebury’s ecstatic owners, Rosemary and Mark Barlow.

Of his unique victory, Andrew said: “He [Avebury] has been in the right place at the right time. He’s always been a winner and horses that are consistently winning have a chance to do what he’s done. This means an awful lot.”

There were mixed fortunes for some of our local riders. After a strong start in the dressage in her Land Rover Burghley debut, Tealby based Gina Ruck on Rehy Too fell at fence twenty-three on the cross country course, slipping on landing after the fence.

Gina unfortunately broke her ankle but still remained positive: “He was brilliant and gave me such a good ride up to then – there’s always next year.”

It was better news though for Alex Postolowsky on Islanmore Ginger. The pair, who are based in Market Rasen, came 33rd. It was their second time at Land Rover Burghley. Speaking about tackling the cross country course, Alex said: “You’ve got to have strength in your own opinion and try to stick by what you think, as usually that’s right. That’s what I’ll be doing this year – making my own plan and sticking to it. There were no expectations last year, but because we did so well I feel that people will assume I can do it again. But it’s not like that – this course can catch the best horses and riders out.

“I do feel fairly confident though as last year [Ginger] did so well and he’s on great form again this year.”

Stephen Hallam, managing director of Melton based Dickinson and Morris Ye Olde Pork Pie Shoppe, has had a trade stand at Land Rover Burghley for over eighteen years:

“Our location at the end of the food walk has become an iconic meeting point and we sell in the region of 500 pies a day. It is a fabulous show and luckily for us eating a pork pie has become part and parcel of Burghley.

“Burghley is also a great place because you have nice people who come here with the intention of spending some money – and nothing makes us happier than customers who spend money! It is a very important weekend in the eventing calendar but it is bigger than that: it is a shopping experience as well, which is a lovely mix.”

Another locally based trade stand that has had a presence at Land Rover Burghley for over four decades is S Milner & Sons Saddlers, owned by Andy Milner, who commented: “We’ve got a shop about four miles south of Melton Mowbray but we close it for the week that we are here. We’ve been coming to Burghley for forty-two years and have eighteen staff on our stand.

“Traditionally our busiest day has been Saturday, although Thursday and Friday can be equally hectic. Footwear and headwear are our biggest selling items. We love coming here, the buzz of it and customers happy to spend some money.”

Occasionally even the most ardent of shoppers needs a break from spending and the Celebrity Talks Area provided an opportunity for visitors to meet and question their equestrian heroes. This year, books by Andrew Nicholson and veteran eventer Mary King were launched, while inspirational fundraiser and former event rider, Claire Lomas spoke about her struggles against adversity after becoming paraplegic.

Another popular activity took place within the Land Rover Owners’ Area. Visitors were given the opportunity to take part in a white-knuckle, off-road experience, allowing them to sample the all-terrain capability of a Land Rover while under expert instruction. Young visitors were entertained with remote-controlled mini Land Rovers that they piloted across a specially designed, ‘all-terrain’ course.

On Friday, the Dubarry Burghley Young Event Horse Four- and Five-Year-Old Finals took place. Both were closely fought competitions won by Rosalind Canter on Fullham and Samantha Jimmison on Ebolensky respectively.
Samantha, whose horse and rider combination was awarded ten out of ten for Suitability and Potential from Judge David Lee, said: “We only came for a good day out. She’s an amazing mare who loves to jump. Whether we continue in eventing with her or focus more on showjumping I’m not sure, but we have a really exciting blank canvas right now.”

Aside from the main competition, visitors to the Main Arena were entertained on Sunday by the SEIB Racehorse to Riding Horse class. Once again this Horse of the Year Show (HOYS) qualifier attracted a large field including many household names. The hard fought contest was won by Jack the Giant; formerly a prolific winner at some of the country’s most famous racecourses including Cheltenham and Aintree.

“The whole week has been glorious and what a fairy tale result for Andrew,” said Elizabeth Inman, event director of Land Rover Burghley since 2005. “The whole Burghley experience has been amazing – the shopping, the competition and ending with such beautiful weather. I loved the cross country because it was so tight in the top six at the end of Saturday, which made it really exciting coming into the showjumping rounds on Sunday.

“The shops have had a real buzz around them and trade stands have done so well over the four days – I’ve seen lots of people walking around with full shopping bags and there really is something for everyone here.

“We now have a little bit of clearing up to do, but I believe you can never start planning too early so I’m already beginning to think about next year!”