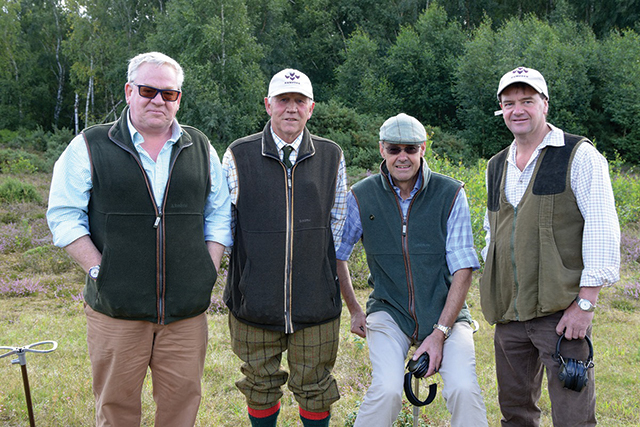 I’m just back from Sandringham, where my team ‘Resolution’ has been competing at Holt’s Charity Clay Pigeon Shoot. This year we raised money for The Gamekeepers’ Welfare Trust headed by Sir John Scott. Thirty teams of four, shooting at some 500 clays each, followed by lunch and an auction, raised around £30,000. Many had made donations; lunch, cartridges and Her Majesty the Queen had lent the ‘Old Shooting Ground’ at Wolferton. Opportunities like firing a flintlock 8 bore and shooting a petrol driven model airplane added to the coffers.

This William Powell sidelock ejector with 30” Damascus barrels (top picture) is rare as it has been made to imitate a hammer gun – notice there are no firing pins! Many shooters had grown up with hammer guns from the 1860s; they shot well with them and crucially used the hammers to help them line up on their target – it was a step too far to dispense with them. They are entirely rigid but serve their purpose, also making a very attractive gun. In our September sale: £5-700.

Cartridge display boards are not uncommon. They are easy to date by looking at the types of cartridges, occasionally big game loads. Sometimes local boards appear, everyone of course keen to sell their own patent cartridges: Smith of Newark selling ‘The Clinton’, Robinson of Hull selling ‘The Kingston’, Arnold of Louth selling ‘The express special’. These boards (see example, left) achieve between £200–£8,000 dependant on age of contents and provenance!

Finally, these duellers by Nock, in this case Henry as opposed to Samuel, are stunning (bottom picture). They are presented in their original case with accessories. They are plain but have the latest developments – rain proof pan and a roller beneath the frizzen to speed up ignition. Henry was gunmaker to George III in 1789 at various London addresses and became a famous name. Ultimately his foreman took over the business, he was called Wilkinson. At its height his factory produced 60,000 bayonets and 6,000 swords annually – now of course Wilkinson Sword.

Next valuation day is at Belvoir Castle on 12th October or call for collection, Simon Grantham 07860 300055.