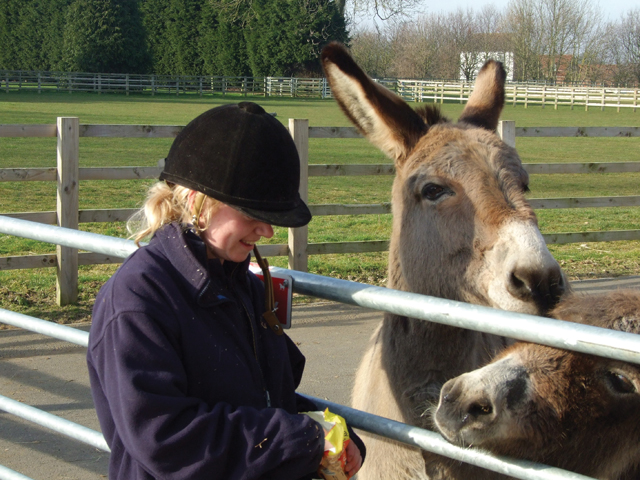 For anyone even remotely interested in horses and the equine world in general, a visit to Bransby is absolutely essential. With pastures and paddocks rolling out to a quite remarkable 600 acres and four stable yards it is certainly no place to think of as a short stop-off for an hour or so. Not that it was always a concern of this size, as Helen Whitelegg, the education and communications officer here readily points out.
“It began as a one-man organization and with just one horse. The brainchild of Peter Hunt took hold in 1947 with Sally, a four-year-old mare that was being kept on a bombsite in South London. She had been kept in a furniture van that had overturned in a storm. Peter found her running around in a yard with a tyre round her neck but he rescued her for £14 and kept her in a rented stable for which he paid half a crown per week. He later moved to Bransby and brought Sally with him. As and when small parcels of land became available in the village, Peter Hunt bought them up and gradually the site grew in size.”

After this, he founded Bransby Home of Rest for Horses in 1968 and this registered charity has continued to provide a safe refuge for well over a thousand horses, ponies, donkeys and mules. The charity is run on a very sound commercial basis, with around half the land being used for grazing and the other half put to crop production and rental. The charity produces all its own hay and forage with hard feed only being purchased as and when required.

Another site in Herefordshire now forms part of this charity. Priory Farm in Stoke Prior was once owned by Arthur and Joyce Hall, friends of Peter Hunt. They started their own venture into rescuing horses thirty years before bequeathing the farm to the Bransby organization in 2003. This site has undergone extensive renovation work and with over eighty acres forms the home for over 100 horses.

Herefordshire is close to the Welsh border of course and as South Wales has one of the largest concentrations of equines in the UK, this in turn ensures that Priory Farm maintains a high rate of involvement in horse rescue. It is a sobering thought that a very high incidence of cruelty and neglect is so widespread throughout the animal world. The fact that charities such as Bransby are spearheading the fight back with animal welfare makes for a pleasing part of the solution but the work does bring about its own array of problems. All charities, particularly those dealing with animals, are struggling for more resources. Costs are increasing all the time and the financial balancing act becomes ever more difficult.

“Education is of prime importance,” said Helen. “Even the aspects of someone wanting to purchase a pony should be weighed up very carefully. Not only do the questions of time involvement and exercise have to be considered but accommodation, food and healthcare too. The staff at Bransby are very keen and only too willing to give talks and advice on all points of equine management and they will do it either at Bransby or at any other venue within a thirty-mile radius.”

Under their ‘Friend for Life’ foster scheme, many horses, ponies and donkeys have been re-homed. This is a system of finding ideal situations for equines to be looked after by new keepers whilst still legally under Bransby ownership. Part of the education here concerns the motivation to take on a horse from Bransby to be re-homed rather than buy one from a dealer.

Bransby is one of the very few charities to be able to rescue and rehabilitate feral horses, which are all too often some of the most vulnerable. Last year the charity rescued forty-three Welsh cobs that had been abandoned. To care for such animals that have never been handled before is no easy task and only through specialised treatment procedures and a very large input of time and dedication by knowledgeable staff do such exercises bear fruit. The bottom line is now a herd of Welsh ponies that do trust humans and also enjoy being handled and fussed over. One of the long-term goals of Bransby is to extend more help to the feral animals that have such poor value commercially.

The number of equines brought into the charity is really amazing. In 2012 the charity rescued 156 animals and placed them into care, with six foals being born as a result. All the animals were identified for reasons of cruelty, neglect or abandonment. The main criterion for rescue is that the animal would be facing an uncertain future if left where found. Currently there are 360 equines at Bransby and 106 at Priory Farm.

The condition of equines brought into the care of Bransby varies considerably and certain procedures do have to be conformed to. For as many horses and donkeys that come in malnourished and in pitiful states of starvation, there are those that have been subjected to overfeeding and consequently arrive in a bloated state. This again brings about its own problems for the staff and in particular the vets who have to act accordingly. Strict dietary regimes are implemented and more often than not, within a short space of time, the animal concerned is nursed back to an acceptable state of health. Some diseases such as ringworm necessitate isolation for a time in designated quarantine areas.

Weather conditions are important and much care and attention is directed to where horses and donkeys are kept – particularly during the cold winter months. Those animals that need nursing back to health require a higher degree of care and so benefit from indoor accommodation. Donkeys are not as weatherproof as horses and they do require management by staff that really understand their needs. They are animals that bond together very seriously and hate to be separated. Horses tend to naturally herd together in order to bring about a sense of community and group security. This habit is promoted in the paddocks at Bransby wherever possible.

Easter this year saw some changes to the charity with perhaps the most significant being the introduction of a new name for the charity, ‘Bransby Horses’ with a new logo design to go with it. The change comes at a time when the trustees of the charity have formulated a new strategic business plan to take it through some possibly quite challenging times up to 2017.

The holiday additionally heralded the launch of Bransby’s new Visitor and Education Centre. This purpose-built centre is primarily aimed at imparting many aspects of equine information. The all-weather facilities include a conference room, tearoom, education centre and gift shop. Demonstrations by farriers and equine dentists and exhibitions take place here as well – it is all here to be explored. Bransby is open every day of the year and with free admission and free car parking, this must be one of the county’s priceless gems.