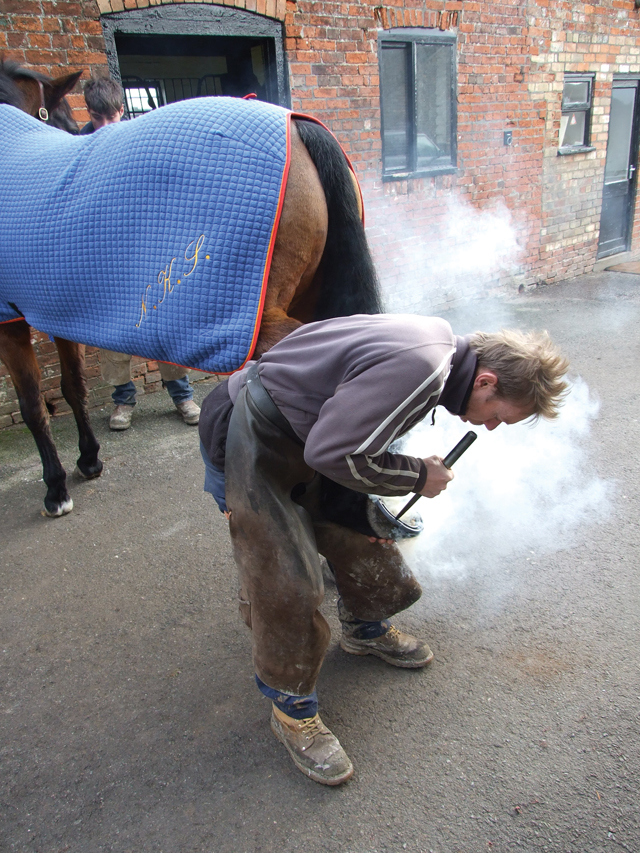 If the shoe fits…

In these hectic days, it is quite a relief to discover that some wonderful examples of traditional rural life are still with us. Among those examples of skills of yesterday is the work of the farrier and we went along to see how Simon Middlebrook is keeping that rural tradition going in today’s world – and tomorrow’s.
We caught up with Simon, along with his apprentices, Rob Oberend and Ben Mochin at Haugh Manor to shoe Dennis, owned by Trisha Nuttall. Simon’s van pulled into the spacious yard and within minutes his mobile forge was at work.

“We have a permanent forge but these days people tend not to bring horses to you so we go out to them,” said Simon who also recalled how he came to be a farrier.

“I was born in a place called Queensbury in North London, near Wembley so I am a Londoner, a townie if you like,” he said. “When I was five we moved to Southport and that is where my love of horses began as I had a few riding lessons and then got more and more into it. I went on to do show jumping and just generally wanted to be around horses. I realised that if I became a farrier I could enjoy a varied life and still be working with horses all the time.

“Once I had qualified I moved to Cheshire and it was all going quite well when the inevitable happened and I found myself kicked twenty feet in the air by an objecting horse and I landed badly, smashing my ankle. I could not work for many months and lost the business I had built up so I looked elsewhere and found that there was a need for farriers in Lincolnshire. I moved here in 2002 and have been happy ever since, it’s a great county for horses. There is quite a variety of animals here and I find myself visiting hunt horses, circus horses, jumpers and what are basically family pets.”

Hooves are pared, metal shoes are heated and shaped and Simon continues to work as he talks, quietly conversing with the horses and his apprentice as they steadily meet the various needs of those horses.

“No two are the same, just like humans,” Simon explained. “You have to treat them with respect. The first thing I ask the owner of a horse I haven’t met before is its age. From that I know how mature the horse is and how likely he is to be co-operative. Horses in general don’t look for trouble but they can sometimes be a bit nervous because they don’t know you or because they are inexperienced with farriers.

“There’s no doubt that this can be a risky business. Most farriers suffer from back ache because of all the bending and twisting and turning but the real danger comes if the horse you are working with is startled. The most placid and steady of horses can get startled by even a fly in its face at the wrong moment but the most common surprises are birds, dogs, the wind or an unexpected vehicle. That’s why it is vital to get the horse’s confidence as quickly as possible. Become a trusted friend and you are less likely to fly through the air on the end of a well-aimed hoof. I am carrying a cracked rib right now because of a startled horse but that’s part of the job. It happens from time to time.”

Simon is one of the few Approved Training Farriers in the county and at the moment he has Rob under his wing.

“I’m from Hull and I am in my third year of apprenticeship,” said Rob. “It’s a fascinating way of life. I come from a farming and horse background and I was always keen to learn the farrier trade so working with Simon is invaluable to me. He covers all aspects of horses’ footcare and both hot and cold shoeing as well as making the actual shoes and making them fit properly. It’s a lot more involved than it might seem and it is very hard work but I am really enjoying it.”

Simon continued, “The job is made easier by the co-operation of owners. Some owners fuss around, others leave you to it. For me, the best owners are those who meet you halfway. They don’t forget you are calling, they answer your questions and they don’t interfere unless you need them to. Most are like that but you always get a few who worry and fuss. They don’t need to worry, all farriers have served their apprenticeship and we want the horse to be happy and the job done well so that we will be invited back. If the owner frets, the horse picks up on it and can get agitated which doesn’t help anyone.”

Of course, the job has its lighter moments from time to time.

“I shoe the donkeys that give rides on the beach at Mablethorpe,” said Simon. “They go to and from the beach every day by trotting through the main road of the resort with their owner on his bike. The first time I ever went to shoe them was a riot because we had to catch them first and they were in a big field enjoying themselves. If you have ever tried to lasso a donkey you will know what it was like trying to catch twenty or more of them. It was pretty exhausting stuff even before we tried to do a bit of pedicure and then get their new shoes on. I have been back quite a few times since and they are great fun. I like donkeys.”

The current economic stresses have only slightly affected the farrier industry as Simon explained.

“People do generally care for their animals and do not neglect them so we have not found ourselves struggling. It seems that Lincolnshire as a whole does not seem to have suffered as much as most. Perhaps a few people are having their horses shod every eight weeks instead of every six weeks but that’s all.”

So it seems that being a farrier is a pretty stable business, if you’ll pardon the expression. Perhaps that will encourage more young people to become apprentice farriers.

“It might,” Simon admitted. “There are a few farriers in Britain but always room for more. Make no mistake, it is a hard, physical job but if you like horses, don’t mind a few aches and pains and the odd unexpected kick, the life of a farrier can be great. I usually work six days a week and sometimes extend that to Sundays as well. My partner tells me she thinks I am married to the business but really that is one of the most important things. You have to be dedicated. If you are, you accept all the hard work and risks. If you’re not, you don’t stay a farrier for long.

“For me though, what better job could there be than working with horses and making them comfortable and happy.”

With that Simon fitted the last shoe, turned off his mobile furnace, packed away his tools and started the five-mile journey to his next call. Travelling with him and Rob were their modern twenty-first century equipment along with the amazing traditional skills of an expert farrier, a champion of rural life.