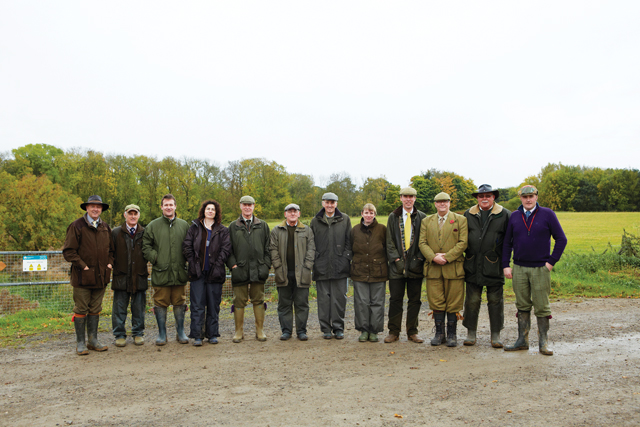 In the field… a day’s shoot at Nocton Estate

The Nocton Estate has had a long and chequered history, which has been fairly well documented in the form of at least two books and countless records of village and estate life. It is also home to a historic shoot.
Unlike so many estates that have been in the same family for generations, Nocton has had many different owners over so many years, one of the most notable being the third Marquis of Ripon who owned the estate from 1816 to 1889. But it was his son, the fourth Marquis, later of Studley Royal in Yorkshire, who was better known for the prodigious amount of shooting that he did as well as his meticulous record keeping.

Throughout the 1950s and 60s it was known as the Smiths Crisps estate and supplied vast quantities of potatoes to its factory in Lincoln. Covering about 6,000 acres, the estate has recently changed hands yet again, having been purchased by well-known British entrepreneur James Dyson, through his farming enterprise of Beeswax Farming.

Having made contact with both the farm manager and the head keeper, I was kindly invited to join them on a shoot day to see for myself how the shooting has developed and evolved despite regular changes in ownership.

Situated just seven miles south of Lincoln, the terrain varies from stoney heath to low lying fenland with a good mix of interspersed woodland dividing undulating fields through its centre. For many years the shoot was predominantly pheasants but now only partridges are released to provide the mainstay of the shooting. The gamekeeper is Kevin Clark, who came to Nocton as a small boy of four years old in 1967 when his father Sam Clark was taken on as head keeper. When Kevin left school aged fifteen in 1979, he was immediately taken on as an underkeeper under the watchful eye of his father. Learning his trade well, he was able to take over as head keeper on his father’s retirement in 2000.

On my arrival at the shoot room I was greeted by shoot captain Ken Deaton and introduced to the rest of the team. After a quick cup of tea and drawing for pegs we loaded up and headed off for the first drive. I took the opportunity to jump in with an old friend I had not seen for some time. David Kent is a longtime syndicate member and he was able to fill me in as to how the shoot is run and managed.

Many years before, following yet another change of estate ownership, the shoot was at risk of folding so it was decided, along with head keeper Kevin and a few shoot stalwarts, that they would form a group and run the shooting as an independent body called Nocton Fieldsports – that way they could always run their own affairs, as well as negotiate with the landowners. This has worked very well and will continue to do so under the new estate ownership of Mr Dyson, who is himself keen to see shooting continue, and I am told that he does in fact occasionally shoot. This bodes well for the long-term future of the shoot.

Two of my fellow guns, Robert Hall and James Thompson, are actively involved in the day-to-day management of the farming enterprise. James was in the company of his wife Fiona and two-year-old daughter Camilla, who seemed to be taking it all in her stride and even carried some birds shot by dad. The first drive was Abbey Hill, a cover crop on a rise (not many hills in this part of Lincolnshire) but high enough to show some great birds that had the wind behind them. The weather forecast was not good, with rain predicted throughout the day. It held off in the main but it did provide a stiff gusty wind that had partridges climbing and curling and giving the guns a real workout that had us all grinning from ear to ear.

We piled back into the vehicles afterwards and headed off to the next drive, called simply The Cereals. This was on stoney heathland where birds were driven over a high hedge with the wind behind them. Birds came like rockets which often meant one shot in front and one behind, with the wind so strong the pickers-up were 300 yards back, so were in no danger. This type of shooting was reminiscent of days long gone, when English partridges were the mainstay of so many great shoots.

To shoot here at Nocton held a special significance for me, as my late father had shot here as a young man in the years leading up to the Second World War, and in the latter years of his life, long after he had given up shooting, he would talk about Nocton.

With the drive over, the team of pickers-up made a sweep behind us, one of whom was thirteen-year-old Harvey Richardson with his cocker spaniel Shadow. It is good to see the next generation taking an active part in the future of our sport. Also in the beating team was Kevin’s ten-year-old son Jack – keen to play his part, he is probably already eyeing up his dad’s job in the years to come. With his grandad Sam and his father to guide him, who knows?

Finally the whistle blew to signal the end of the last drive of the day. Like so many shooting days, it all seemed to end far too quickly, but end it did as we all headed back to the shoot room to sit down to a welcome meal and to talk about the day’s shoot. As darkness fell, I thanked everyone for their kindness and for giving me the opportunity to visit this historic shoot.