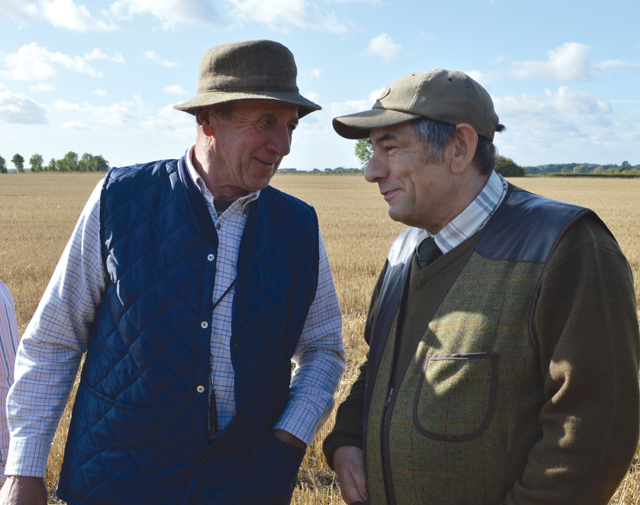 In the field… Scrivelsby Court Shoot

This month’s report comes from a shoot that I have been fortunate enough to visit on a number of occasions, Scrivelsby Court.
Scrivelsby Court is situated just outside Horncastle and is the family estate of the Dymokes. The shooting side of things is run and managed by county businessman Brian Loader, ably assisted by his gamekeeper John Lee. For those of you who do a bit of clay shooting, John will be a familiar, having a string of titles to his name as well as having represented England on five occasions. But what may not be as well known is his renown and respect as one of the best gamekeepers in Lincolnshire, as well as being one of the most liked.

Anyone who has had dealings with John either through clay shooting or in his role on the shoot will attest to both his abilities and his manner, quite simply a great guy to be around. On shoot days, John is usually ably assisted by his lovely wife Becky, who will always be found either picking up or putting the guns out; always charming, always smiling, she effortlessly manages to put all visiting guests at ease.

A shoot owner I know recently told me that when recruiting a new keeper it is vitally important that he has a partner who is 100% supportive both at home and on the shoot. Becky fulfils this role superbly. When Brian took the shoot on some years ago, he was able to persuade John – who was in a steady position as an underkeeper on the Buckminster estate south of Grantham – to come to Scrivelsby and run this renowned shoot and to put his stamp on it. During his time here, he has certainly done just that, by introducing new drives as well as improving others while at the same time consistently maintaining bag levels and providing wonderful sport to guns that come back time after time.

As I said at the beginning, I have shot here on a number of occasions, so when I got a call from Brian asking if I would care to join them in late September for an early partridge day I jumped at the chance. “Just one thing,” he said, “we are all using 410s.” Well, that took me aback, as my use of the little 410 is limited to the odd pot shot at pigeons or squirrels with the single barrel hammer gun that sits quietly in my gun cabinet waiting for the occasional outing.

This was to be a formal day that called for something a little more modern and of course a double barrel, so a quick phone call to a pal got me the loan of a nice o/u with a single trigger. Now there will not be many shooters out there who did not take their first few tentative shots as a youngster with this diminutive little calibre and I was no different, so this baby gun has always had a little place in my heart, with fond memories of ambushing the unwary bunny or as a tool for vermin control. This, however, was on a different level. I was going to be standing on a peg with birds coming over at varying heights and speeds intent on getting passed me. Would the 410 be up to the job and would I be able to do it justice?

The day duly arrived and with great anticipation I joined in the meet and greet over coffee. One of the guns present was just a bit more experienced with the little gun than most, he was in fact the 2010 winner of the World 410 Championship. Les Taylor is an avid fan of the calibre and was able to answer some of our questions prior to setting off for the first drive. He said the main thing is to forget it is a 410 you’re shooting, and that once the shot has left the barrel it does not know whether it came from a 410 or a 12 bore. Sound advice, I thought.

As the day unfolded he was proved right, as each drive we all managed to put birds in the bag and each drive John and his team of beaters put ever more sporting birds over us. This was strictly a partridges-only day, as pheasants were not in season yet. As the whistle was blown to signal the end of the last drive, we gathered to discuss the merits of the day and to decide whether the little 410 had met our expectations. I have to say that it certainly exceeded mine, being able to cope well with some outstanding birds. We all agreed that we should come back a little later in the season when pheasant would also be on the menu.