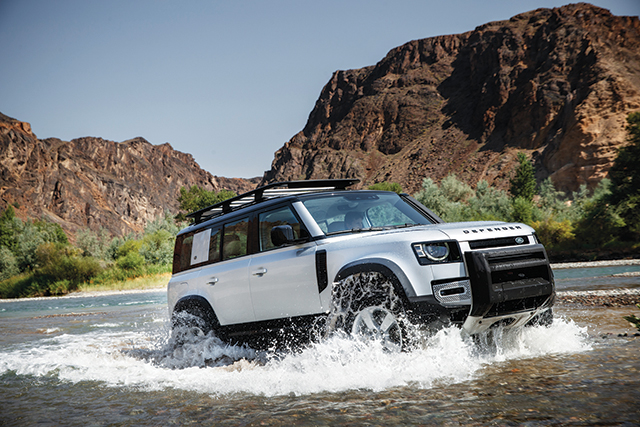 This is the new Land Rover Defender. An icon reimagined for the 21st century, it has been cleverly engineered with capability and safety for all the family at its heart.
The unmistakable silhouette is familiar yet new. It looks tough and is tough but designed with purpose and engineered to excite. Iconic in name, shape and capability, Defender can be personalised to allow owners to make the most of their world.

Across seven decades of pioneering innovation, Land Rovers have earned a unique place in the hearts of explorers, humanitarian agencies and adventurous families across the world. Proven in the harshest environments on earth, the new Defender maintains this bloodline.

Beside the peerless luxury and refinement of the Range Rover family and the highly capable and versatile Discovery SUVs, the new Defender completes the Land Rover dynasty. The 110 is just the start for this family of the most capable and durable 4x4s in the world. It will be swiftly followed by a short wheelbase 90, before a pair of practical commercial models join the line-up in 2020.

Driven by a passion and respect for the original, the new Defender delivers transformational breadth of capability and advanced all-terrain technologies to redefine adventure for the 21st century, while remaining true to the pioneering spirit that has been a Land Rover hallmark for 71 years.

The stripped-back personality of the original Defender has been embraced inside, where structural elements and fixings usually hidden from view have been exposed, with the emphasis on simplicity and practicality. Innovative features include a dash-mounted gear shifter to accommodate an optional central front ‘jump’ seat, which provides three-abreast seating across the front like early Land Rovers.

A choice of advanced petrol and cleaner diesel engines ensure the new Defender has the power, control and efficiency for any environment, while a Plug-in Hybrid Electric Vehicle (PHEV) powertrain will join the range next year providing the prospect of silentEV-only progress.