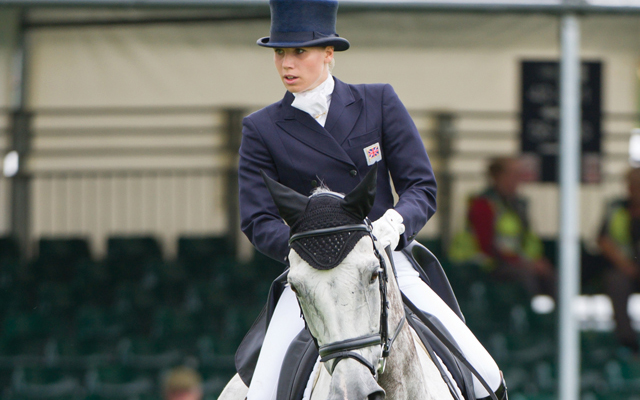 Carole Pendle talks to talented young rider Gina Ruck, who despite setbacks and injury is as determined as ever to compete at this year’s Land Rover Burghley Horse Trials.
Competing at the Land Rover Burghley Horse Trials has been a lifetime ambition for young Lincolnshire rider Gina Ruck. However, having reached her goal and qualified for the 2014 event, things did not go according to plan.

For Gina 2014 had been her most successful eventing season to date. She had racked up a series of top ten placings with her horse Rehy Too, culminating in a fourth place at Yorkshire’s Bramham International Horse Trials and subsequently qualifying for what is broadly acknowledged to be the sport’s toughest challenge, the Land Rover Burghley Horse Trials.

Gina said: “It’s my local event and I remember going there as a spectator from an early age. It’s the ultimate test and riding at Burghley is something I’ve always aspired to do.”

Despite being a first timer, Gina got off to a flying start. In the initial dressage phase she rode what she describes as “the best test we’ve ever done,” leaving her amongst the top twenty riders.

As Gina started out over Burghley’s notoriously tough cross country fences, things looked promising. “Rehy Too felt amazing, he was jumping brilliantly and we were having a great time,” she said. But in an instant her dreams were shattered. At a relatively straight forward fence, The Picnic Table, Rehy Too slipped on landing, falling awkwardly and crushing Gina. Fortunately the horse was unscathed, but Gina was injured and taken to hospital with a broken ankle.

Gina said: “I knew I’d hurt myself straight away. In fact, I’ve been incredibly lucky to date, as it was the first time I’d ever broken a bone. And I hope it’ll be the last!”

Gina’s indomitable spirit shone through; within hours she was in plaster, on crutches and back at Burghley to cheer on her fellow competitors. Rather than put her off, the experience has left her hungrier than ever for competition success.

She said: “It’s the big events that make you want to do it. Getting to the top and being the best. Now that I’ve ridden at 4* level I know it’s within my grasp and I can’t wait to get back to Burghley in 2015.”

At just twenty-two years old, Gina is an old head on young shoulders, perhaps the result of competing at elite level from a very young age. She has represented Great Britain at both Pony and Young Rider level, winning a team gold medal in the 2007 European Championships aged just fourteen.

A pupil at Lincoln Minster School, Gina completed her A levels before beginning her career as a professional event rider in earnest. Her family have always been supportive of her ambition and helped her purchase an equestrian base in Tealby outside Market Rasen two years ago. However, the harsh realities of funding an eventing career are always there and in order to finance competing and ongoing improvements to her yard, Gina takes in liveries, teaches and sells some of her promising young horses. “It’s tough and I’d rather keep them” she explained, “but this year I want to build an outdoor arena and put a roof on my horse walker and selling some of my talented young stock will help me do that.”

Sponsorship is also an important part of the mix and Gina has the support of a range of equestrian brands including Bailey’s Horse Feed, Verdo Bedding and Devoucoux Saddles. She’s also on the lookout for new owners, hoping her rapid trajectory within the sport and track record of training young horses through the levels will attract some new equine horse power to her stable.

In fact, Gina is exceptional in that she has produced all her horses from scratch. When asked why she’s taken this challenging and time consuming route rather than buying established horses to compete she says, “I always remember former Burghley winner Judy Bradwell saying that it’s better to make your own horses than buy someone else’s training and problems. She’s right, I think you have a better bond with a horse you’ve trained yourself and a greater degree of trust.”

At such a young age, Gina is juggling a lot and has quickly grasped that getting to the top of her chosen profession isn’t just about talent. However with her combination of determination, ambition and talent, Gina is certainly one to watch.