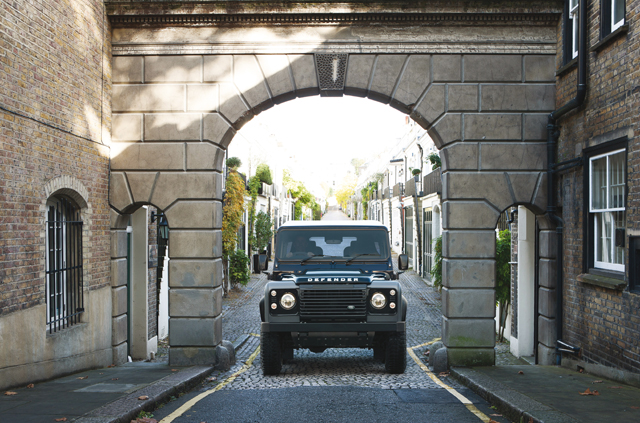 World’s most iconic vehicle drawn on huge 1km scale on the same beach used to sketch the original design 68 years ago.
Land Rover has gone back to the place where it all began to start a year-long celebration of the iconic Defender. A unique 1km sand drawing at Red Wharf Bay in Anglesey marks the launch of three exclusive limited edition models and the beginning of an exciting new chapter in the Defender story.

As UK production of the current Defender enters its final phase, Land Rover will use 2015 to celebrate its global automotive icon.

Land Rover vehicle line director, Nick Rogers explains the significance of recreating one of the world’s most iconic vehicles: “Passion and enthusiasm surround everything we do with the Defender, and that will never change. With a history stretching back sixty-eight years, this is a Land Rover that has thrived for decades on its unquestionable capability and iconic shape. I now have the honour of being one of the many enthusiasts at Land Rover committed to creating a fitting successor to the legendary Defender.”

To mark the announcement Land Rover has created the largest sand drawing ever produced in the UK. A Defender outline measuring a staggering 1km across was drawn on the beach at Red Wharf Bay using a fleet of six Land Rovers. The unique image is a tribute to the moment in 1947 when the engineering director of Rover, Maurice Wilks, first sketched the shape for the original Land Rover in the sand of Red Wharf Bay and proposed the idea to his brother Spencer, Rover’s managing director.

“My father met his brother on the beach at Red Wharf Bay and made a drawing in the sand of how he thought the Land Rover could be made,” said Stephen Wilks, son of Maurice. “That was the start of it all, the conception of Land Rover.”

The Wilks family owned land on the Welsh island and Maurice wanted a versatile vehicle that could double as a light tractor and off-roader. His forward-thinking design was christened the ‘Land Rover’, the outline of which we now recognise as the Defender.

Creating the giant piece of temporary artwork at Red Wharf Bay required a fleet of six Land Rovers, each towing an agricultural twelve-foot harrow to draw the unmistakable outline of the Defender in the sand. The vehicles chosen for the race against the Anglesey tides chart the evolution of the Defender from its introduction in 1948 to the present day.

A Land Rover Series I, II and III were joined on the beach by a Ninety from the Eighties, a Defender 90 Hard Top and a Defender 110 Station Wagon. The immaculate Series II once belonged to the Wilks family and in memory of the moment originally enacted by their fathers, cousins Stephen and Nick Wilks, the sons of Maurice and Spencer Wilks respectively, were on hand to take part. They helped to draw the continuous 4.52km line – the length of 1,118 Defender 90 Station Wagons – into the sand with just minutes to spare before it was erased by the incoming tide.

The event witnessed the debut of the Defender Celebration Series; three exciting new limited edition models which each celebrate a different element of Defender’s unique history. The Heritage, Adventure and Autobiography Editions are all powered by Land Rover’s proven 2.2-litre diesel engine and are available to order now.

Land Rover is also investigating the possibility of maintaining production of the current Defender at an overseas production facility, after the close of UK manufacturing. Any continuation would see low volume production maintained for sale outside the EU.

“We wanted to mark the end of Defender production at Solihull with a special edition but coming up with a single identity was impossible, so we developed three very different interpretations of the Defender to reflect its strength and breadth of character,” said Nick Rogers. “Whether our customers want to celebrate Land Rover’s unrivalled off-road heritage, demand the ultimate in terms of design and performance or have a genuine thirst for adventure, there will be a limited edition Defender that will be fit for purpose.”

The exclusive Autobiography Edition promises more performance, luxury and comfort than ever before thanks to its comprehensive equipment list, unique duo-tone paintwork, full Windsor leather upholstery and a power upgrade from 122PS to 150PS. Exclusivity comes as standard as only eighty Defender Autobiography Editions will be available in the UK. It will be produced exclusively as a 90 Station Wagon and priced from £61,845.

The Heritage Edition is inspired by early Land Rover models and mixes nostalgic design cues with modern creature comforts. It will be identified by distinctive Grasmere Green paintwork and a contrasting white roof. A heritage grille and HUE 166 graphics, recalling the registration plate of the first ever pre-production Land Rover nicknamed ‘Huey’, also identify the Heritage model. It hits showrooms from August with production limited to 400 in the UK. Prices will start from £27,800.

The exciting new Adventure Edition is aimed at Land Rover customers who relish the great outdoors and embrace the Defender’s ‘go anywhere, do anything’ attitude. It comes fitted with additional underbody protection and Goodyear MT/R tyres to boost the Defender’s already class-leading all-terrain capability. Unique decals and a leather-trimmed cabin ensure the Adventure Edition stands out from the Defender crowd. A total of 600 Adventure Editions are available in the UK priced at £43,495 for all versions.