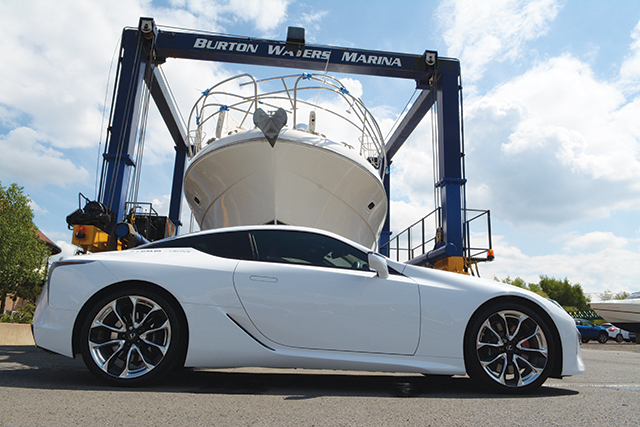 Head turning new Lexus has supercar styling.
Lincolnshire Life test drove the Lexus LC500 courtesy of Lexus Lincoln, ending the tour at Burton Waters alongside the marina.
The Lexus LC500 looks elegant and impressive all at the same time. With a grille like a shark’s mouth, smooth flanks, razor-sharp lights, and a low-slung roofline, it’s more striking than many European rivals.

What’s more, the LC500 is equipped with a ten-speed automatic gearbox. You have so many cogs that you never need any more power from the engine because you can compensate with the meticulously assembled mass of ratios.

The clout and glut of gears help the LC500 rush to 62mph in 4.7 seconds, and onto a maximum 168mph. The pitch and tone of the V8 drawing in air as the amount of throttle changes is as pleasing as it is invigorating.

As well as the magnificent sound the Lexus makes, there are other advantages to its atmospherically nourished engine – and that’s throttle reaction. Every bit of accelerator-pedal movement has an impact on forward propulsion, and instantaneously.

Up and down gearshifts are quick and distinct, too. The steering-wheel-mounted paddles are well-weighted, and a delight to operate. If you don’t want to enjoy changing gears manually, the automatic mode on our test car does a top job.

The LC500’s ride glides very smoothly and there’s a lot of control, so any sense of rigidity is worth it. The car’s body feels tough too, with no indication of a shudder from the shell, even over the most uncompromising lumps and bumps. The steering is light, so it’s undemanding to point the Lexus’ snoop where you want it to go. Every facet of the car – the feel from the chassis, the engine and the steering – enables you to drive the vehicle with confidence.

In a nutshell, the LC500 is a compelling and attractive choice of car, and its kit list and refinement make it stress-free to live with. The entry level car costs only £76,660. The top of the range model with the Sport+ pack, that comes with rear-wheel steering and an adaptive rear wing – it costs £86,335. Yes, that’s still a lot of cash, but not many cars provide the same level of sophistication as well as elation for a similar outlay. That it also feels and looks so spectacular and unique makes it very hard to trounce.

When it comes to V8 rivals, you might want to look elsewhere but my advice is to stick with the Lexus – you won’t be disappointed.