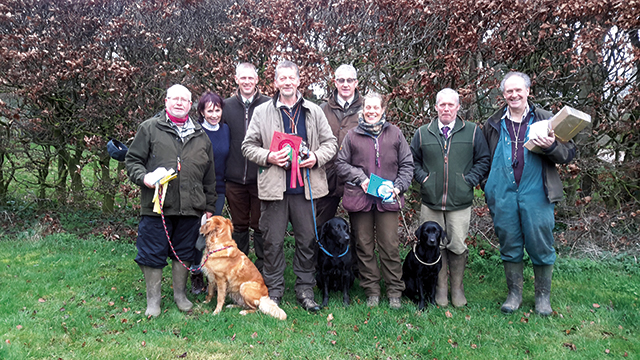 Report on Novice Working Test at Thorganby on Sunday 3rd March 2019.
Once again, we thank Mr and Mrs J Milligan-Mamby for allowing us to hold our Novice Test on this beautiful ground. There is everything here that a test setter could ask for.

As storm Freya was expected in the afternoon, chief steward Sue Lowe kept things moving so that all the dogs were given time to show what they could do but we had finished and were on the way home before the gale arrived.

Our judges for the day were Andy Slingsby, Martin Eveleigh and Charlie Albone. They marked the twenty-five dogs over three tests in the morning before a short break for lunch. Twelve dogs went through to the two afternoon tests.

Test 1 was a picking up exercise. Three dummies were out amidst the trees and daffodils. There was one shot and the dogs had to go down a steep slope and through an opening to pick two of the dummies.

Test 2 was a double at about 75m in a grass field. Each mark was heralded by a shot and the dogs had to pick the second dummy down first.

Test 3 was a mark and a blind, both with a shot. A dummy was thrown in a grass field to the right. This was picked first. The dogs then had to go over a track and through a hedge to find the blind nestling behind a tree.

The remaining twelve dogs went on to the two final tests.

Test 4 was a four-dog walk-up. The first retrieve for each dog was a long straight mark with a shot. The dogs picking the dummies alternated right and left, walking on between each retrieve. This was then repeated with each dog having a crossing retrieve.

Test 5 was another picking up exercise. Three dummies were out in rough cover in a wood at the top of a steep slope, some 100m away. One shot was fired and the dogs went over the stream and away to pick two of the dummies.

Both of these tests were challenging. There was some excellent work by all of the dogs, but only three managed to come out with a clean sheet