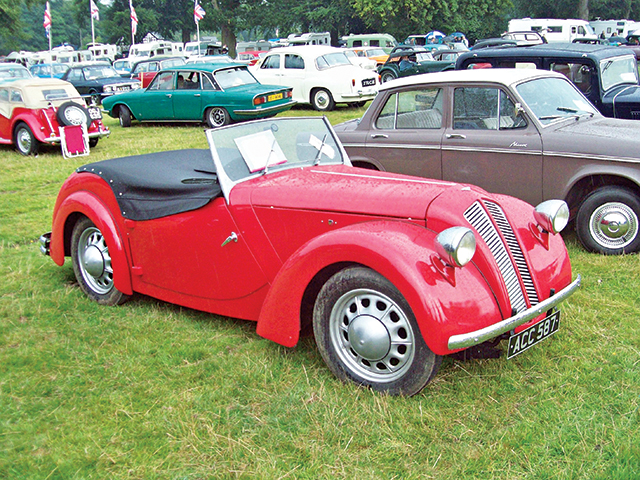 Founded in 1935 by Roland Lloyd, Lloyd Cars Ltd was situated in Patrick Street, Grimsby. Lloyd produced just two cars: the pre-war Lloyd 350 Two-Seater, and the postwar Lloyd 650 Roadster.
Roland’s father, Fred Lloyd, was a successful Grimsby fish merchant. According to Grimsby writer Giles Chapman, Fred did well enough for himself to open a garage in 1911, from which he sold cars by Crossley, Arrol-Johnston and Willys. Roland, born in 1904, became fascinated with automobiles. He was driving by the age of fourteen, and was managing director of the concern from the age of eighteen. A tinkerer by nature, Roland decided to design his own economy car to compete with those already on the market.

THE LLOYD 350
Roland and his friend John Hannen constructed their first car, which was to become the Lloyd 350, in a back shed behind Fred’s garage. When it was completed, the two transported it to a factory in Patrick Street which Roland had bought, and where he established Lloyd Cars Ltd. Without an advertising campaign, Roland bravely began producing and selling the Lloyd 350.

Designed to be simple, the 350 was a handmade cycle-car with (initially) a rear-mounted, air-cooled, one-cylinder Villiers two-stroke motorbike engine. This was replaced with an 11½ hp water-cooled 347cc two-cylinder Villiers engine, which powered the nearside back wheel via a chain drive. The car had all-round independent suspension with transverse leaf springs. The air duct to cool the radiator was on the underside of the car, forward of the rear axle. This was poorly positioned, as the duct sometimes got blocked with mud, snow or other debris, which caused the engine to overheat. One novel feature of the 350 was hand-operated windscreen wipers!

The Lloyd 350 could be had as an open two-seater, or a closed three-seater. The car was over nine feet in length, and had a tubular backbone chassis. The standard paint scheme was black with red mudguards, and the fuel economy was listed as 40mpg, though some owners claimed to have achieved substantially higher than that with their cars. One owner who had a new Lloyd 350 in 1936 reported that the car operated well on level roads, but when carrying three people up steep hills, it was necessary to go in reverse, as that was the car’s lowest gear! The basic model cost £80 and could go to 45mph. For £85 you could have the deluxe version, which had an electric starter and lighting.

Chapman wrote that Roland had some success by selling a number of 350s to The Gas Light & Coke Company in 1938, as work transportation vehicles for its gas repair men. These cars carried gas meters, and under-bonnet tool trays. Some of the cars were exported to South Africa, New Zealand, and the Netherlands.

Lloyd announced a 5 cwt front wheel drive delivery van in 1938, offered for £95 in primer grey, but you could have it in green or blue for £97! The van was advertised as having a top speed of 40mph, and a fuel economy of 50mpg. With the outbreak of the war, the van didn’t come to much, and the company ceased production of the Lloyd 350. Lloyd had manufactured 250 to 300 examples of the car. During the war, Lloyd dedicated most of its production to making parts for Rolls Royce Merlin engines for Hawker Hurricanes and Supermarine Spitfires.

THE LLOYD 650
As the war raged on, Roland and Hannen drew up plans for a postwar car. Carrying forward some of the concepts of the 5cwt van, just after the war Lloyd began production of the 650 Roadster. The 650 had a water-cooled two-stroke two-cylinder 645cc 25hp engine produced by Lloyd (the prototype had a 17½ hp motor.) The engine was front-mounted, and fitted transversely to power the front wheels (as in the Mini). A three-speed gearbox is listed, but apparently a four-speed was available later.

Like the 350, the 650 had all-round independent suspension, but with coil springs. Also like the 350, it had a backbone chassis. Roland took a proprietary approach, so almost every piece of the 650 was made by Lloyd in-house, barring the steering wheel, lighting and instruments.

Available as an open-top two- or four-seater, the 650 was over twelve feet long, and had a top speed of 55mph. The maker listed the fuel economy as 60mpg. Some 650s were exported to Denmark, the US, Australia, India, and Belgium. A drawback of the car was its price, which in 1948 was £375 (about £480 including tax). Other economy cars of the time were less expensive, and even some contemporary family cars cost less than the 650, at about £300. Roland had intended to produce five 650s per week, but usually made two or three, and the company began to fall behind on its orders. Chapman reported that Lloyd manufactured about 400 of these cars, though other sources put the figure at 600. Roland also experimented with van and saloon variations of the 650.

The January 1949 issue of Motor Sport Magazine contains a review of the Lloyd 650, written following ‘an afternoon drive’ of one of the cars loaned by Guy Salmon Automobiles of Thames Ditton. The car cruised happily at 40mph, and topped out at 51mph. Second gear took the 650 to 30mph. The car held the road well while cornering, gave a comfortable ride, and one full rotation of the steering wheel turned the front wheels from lock to lock (i.e. from all the way right, to all the way left).

The reviewer remarked on the car’s storage space, with ‘two big cubby-holes, door pockets and a luggage locker’ all being provided. The field of vision was good via the large single-pane windscreen, while the driver found the brakes and clutch too sensitive, perhaps due to the newness of the example tested.

Gear changing was difficult while stopped, but once moving, shifting became easy. The engine was noisy, the exhaust emitted a trail of blue smoke, and the car was sometimes slow to start. Noted were the two Lucas windscreen wipers, rear-hinged doors, lamp dimmer switch, and horn button. The reviewer concluded about the Lloyd 650: ‘a jolly little car, which we would like to try over a greater distance.’

Lloyd Cars Ltd ceased auto production circa 1951, but the company continued on as a general engineering firm until 1983. Roland Lloyd passed away in 1965. Perhaps thirteen to fifteen examples of Lloyd cars are said to survive – a handful of 350s, and about ten 650s.

CYCLE-CARS
Cycle-cars, made chiefly from 1910 to the latter 1920s, were small, lightweight economy cars. The name derives from the idea that these vehicles were intended to occupy the market space between the motorbike and the automobile. Some cycle-cars were fitted with motorbike engines, and used other motorbike components such as gearboxes.

There were two classes of cycle-cars. The large class had a weight limit of 772lb, and a maximum engine capacity of 1100cc. The small class cars were required to weigh between 331 and 661lb, and had a maximum engine capacity of 750cc. In the spirit of simplicity and economy, it was common for only one of a cycle-car’s rear wheels to be powered (as in the case of the Lloyd 350), such a design sidestepping the need for a differential! The cycle-car concept reappeared after the Second World War, and especially when the Suez Crisis triggered oil and fuel shortages in 1956. These postwar vehicles are known as micro-cars, and later models as bubble cars.

LINCOLN ELK MOTORCYCLES
From 1891, James Kirby made Lincoln Elk bicycles out of his Kirby & Edwards shop at 4-5 Broadgate, Lincoln. By 1902, Kirby was experimenting with fitting small petrol engines to bicycles. He created a model in 1905 with a 2¼ horsepower motor which could be assisted by pedalling. This machine had braced forks, a loop frame, and could do over 20mph. Kirby also introduced a two-speed gear system in 1911-12 with two clutches, one on either side, to engage a belt or chain which drove the back wheel.

Before the Great War, Kirby had two motorised bikes available; one a 402cc 3hp model, the other a 499cc 3½ hp motorbike. The 402cc model, available by 1908, had a top speed of 40mph. An advertisement for this machine told that it was a ‘splendid hill climber’, and that the basic version cost £19 10s. It also noted that four Lincoln Elks were entered in the Lincolnshire MCC Reliability Trial, in which all four completed without engine mishap, two of them finishing in the top five. In 1910, the price range of the motorcycles was £28 10s to £37. Kirby continued to develop his concepts, with a 2¾ hp lightweight machine, the 4¼ hp Model B, and the 6hp 770cc V-Twin. The latter machine had a starting price of £55.

Kirby had each Lincoln Elk motorcycle taken on a test drive on Broadgate and up Lindum Road. If the motorbike could reach the top of the hill, it received a pass; if it couldn’t make the distance, back to the factory it went for tuning or more substantial work. Kirby’s motorbikes were mostly handmade, and competition from bigger manufacturers which mass-produced the vehicles was strong. In 1924 Kirby, then in his eighties, shut down his motorcycle production.