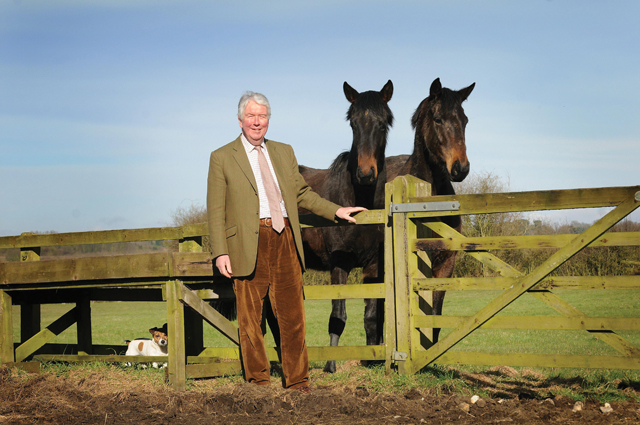 Meeting the challenge to keep Burghley the best

It is quite something to have committed one particular date to the diary each year for the past 48 years but this is what Richard Jewson, the current chairman of The Land Rover Burghley Horse Trials (5th–8th September 2013), has done ever since 1965 – just four years after the inaugural event.
“It was the year my wife Sarah first competed at Burghley and I think we have been every year since,” said Jewson, who has been married to Sarah for the same length of time. The couple subsequently owned the four-star event horse Bits and Pieces, ridden by Pippa Funnell (then Nolan) to fourth place in 1996. Their four children have also competed at Burghley, albeit in the Pony Club Show Jumping team event.

“For many reasons it’s an event I wouldn’t miss and therefore when I was asked to be chairman I was thrilled to take on the role,” said Jewson.

“Elizabeth does a wonderful job and it’s a vast undertaking,” said Jewson. “The majority of people only see the horse trials for four days of the year but it is a 365-day job and complicated – one day could be dealing with TV or sponsors, the next making sure there will be enough lavatories – it’s the sublime to the ridiculous.”

The huge remit of running the event means that Jewson spends more time in his role as chairman than the four allocated meetings. “I keep in constant contact with Elizabeth between meetings,” said Jewson, explaining the role of the Committee. “The job of the committee is to support, and at times challenge Elizabeth in order that Burghley remains what it is – the finest horse trials anywhere.”

The reason that Jewson believes Burghley Horse Trials is “the finest” is not only because it is “extremely well run” by the director and her team but because of the atmosphere. He said: “It always has a friendly atmosphere and as well as our many loyal visitors, riders love coming here – they will tell you it is a friendly event and that is one of the reasons that it has won on a number of occasions the ‘Best Event’ award as voted for by the riders.”

The award presented each year by the international yearbook L’Année Hippique was last won by Burghley Horse Trials – for the sixth time – in 2011.

Jewson attributes much of the friendly atmosphere to those behind the scenes. He said: “Everyone is there to help and there is a huge team of helpers – many of them volunteers – who love it and want it to be a success, it’s a success to be maintained.”

Maintaining success is, as everyone knows, much harder than climbing to the top in the first place. Therefore should events like Burghley, now as much a tradition as Henley, Wimbledon and Royal Ascot, change at all when there is already a winning formula?

“I believe all organisations should change,” replied Jewson, “but in a way that responds to visitors and at a rate that people don’t notice.”

There is one change that has not gone unnoticed, however, and like all events Burghley Horse Trials has had to face the rapid change brought about by the internet and more recently social media. Jewson admits keeping up is continually testing. He said: “The biggest challenge has been changing to the digital world and we now have to provide a huge broadband capacity. Not only do we have a busy website with all the social media channels, we also have Burghley TV, which broadcasts more and more each year. In addition, broadband is needed by the large number of media that attend the trials; the trade stands; the organisation team and of course the visitors. We have to respond to the changing demands of customers, the sport and riders and of course all the associated health and safety aspects.”

Away from the intricacies behind the scenes, for the four days of the event Jewson is more than happy to be a spectator and cannot choose any part as being his favourite. “The whole of cross country day is so exciting, the dressage is a wonderful spectacle, the shopping is superb and the final day’s showjumping a fitting and exciting climax,” said Jewson. “Everybody, including me, loves it.”

The Land Rover Burghley Horse Trials takes place 5th-8th September 2013 – for further information about the Trials and to book your tickets go to www.burghley-horse.co.uk