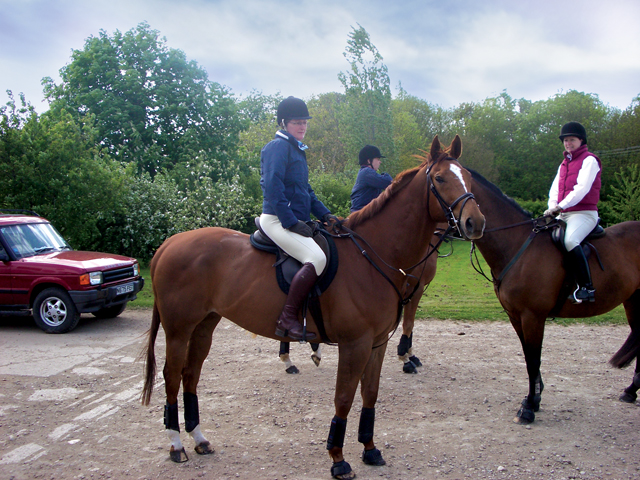 New challenges for Anne Whitton in 2012

As the Land Rover Burghley Horse Trials celebrated its 50th anniversary last year, a key member of its organising team also reached a milestone of her own.
Competition secretary Anne Whitton has been involved with the Lincolnshire event for over twenty years. She is a lynchpin in Burghley’s management armoury, overseeing everything to do with the competition, from dealing with entries and checking riders are qualified to compete, to booking and liaising with officials, co-ordinating medical and veterinary cover and managing the numerous subsidiary competitions, including the Dubarry Burghley Young Event Horse Series. Hers is a job that would see lesser mortals running for cover.

“It can be demanding at times and I am forever multitasking, but I get a huge amount of satisfaction at the end of a successful event, when all the horses and riders come home safe and sound,” Anne said.

Anne works part-time at Burghley over the winter months, but from springtime she starts making the twenty-five-mile commute from her home in Spalding to the Stamford offices every day.

“The workload varies depending on the time of year,” Anne explained. “July and August is definitely the most stressful because, inevitably, everything reaches a crescendo and all the plans need finalising at the same time.”

Anne has lived in Lincolnshire for over thirty years. She was born and spent her childhood in Sunderland and grew up in a family that was not remotely horsey.

“I was the annoying child who always wanted a pony and riding lessons,” Anne said.

At sixteen, Anne left school to work in an office, but she decided that life behind a desk wasn’t for her and swiftly left home and replaced her swivel chair and keyboard with a shovel and wheelbarrow.

“I went to Wales as a working pupil in a riding school before moving to work in hunt kennels in Yorkshire. My mother was convinced that I’d run straight back home,” Anne explained. “But I loved the horsey life. I moved on from the kennels to groom for (prolific event rider) Marjorie Comerford at her Lincolnshire yard.”

Anne stayed with Marjorie for four years, before she married and reluctantly resumed an office job. “Marriages and working with horses don’t go together!” Anne said. But in 1990 an opportunity to transform her passion into a more permanent vocation presented itself out of the blue.

“I was helping out at Belton Horse Trials, in Grantham, when Elizabeth Inman (Burghley’s current director), who was secretary there, approached me and asked me whether I’d consider coming to help at Burghley,” said Anne.

At that time the event was still under the directorship of Bill Henson, but Anne quickly made her mark and stepped up to the role of competition secretary.

“The demands of the job have changed dramatically since I’ve been here,” Anne said. “I’ve seen the event grow in both absolute terms and in stature – there are now more competitors, more officials and more contractors. Consequently, the amount of paperwork has grown with it.”

Theoretically, Anne’s job should be easier now that competitors have to enter online. But this is not always the case as riders can be notoriously haphazard when it comes to conveying important information and putting pen to paper, or fingers to keyboard.

“They are supposed to fill in a short biography form, which the press office uses to compile information for journalists, commentators and television broadcasters,” she explained. “But riders rarely give this much thought. I’ve received entries before where a competitor’s information has been out of date by ten years – one had even got married and changed their name, but still sent in the same form!”

As well as working for Burghley, Anne is also secretary for Lincolnshire Horse Trials, one of the first events in the British Eventing calendar in March, and one that attracts around 800 entries over three days.

“It’s nothing like the same scale as Burghley, but it presents different challenges and it keeps me on my toes,” said Anne, who admits that she has no desire to don a body protector and crash hat and take to a cross-country course. “I have an ex-racehorse called Fayrz Please. He’s a lovely boy, but neither of us is very competitive – we do a bit of hunting, unaffiliated dressage and showjumping, but that’s about it.”

For now, Anne is enjoying a couple of quieter weeks over the Christmas period.

“The fiftieth anniversary event this year was huge – certainly the biggest yet in terms of organisation,” she said. “We’ve had a few months to wind down, but I know it will be full steam ahead again in the New Year.”