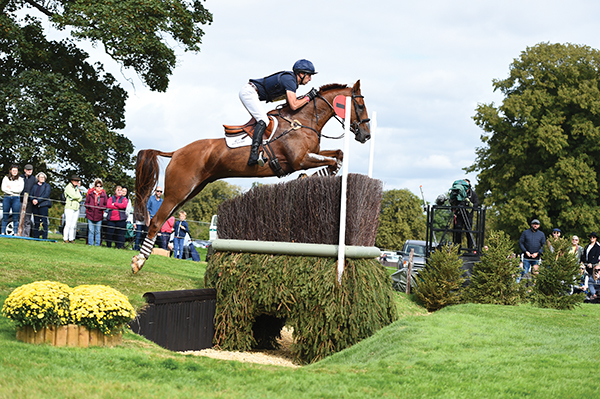 It’s an exciting time for the Land Rover Burghley Horse Trials, which are set to be held for the first time in three years under the guidance of new event director, Martyn Johnson. Kate Chapman reports.

Martyn, previously director of Burgham Horse Trials and manager of Alnwick Ford Equestrian, in Northumberland, is looking forward to the challenge and responsibility of putting on the prestigious event and is keen to ensure it lives up to the expectations of regular visitors on its return to the sporting and social calendar.

“There’s so much that makes Land Rover Burghley special – the time of year it runs, at the end of the summer holidays in September, when people come back year on year,” says Martyn.

“There’s a lot of history and heritage tied to this location, it really is an iconic place. Burghley is loved for so many different reasons – some people come because they are fans of the sport, but a lot of people never even see a horse when they’re here, they come for the shops and the food walk.

“It’s a very big social occasion as well as a large sporting one. I know how important the event is to other people, but I have a good understanding and come from the sport myself.

“I do find it a huge responsibility – I am the custodian of Burghley and its history but it’s also a great honour to be taking it forward for future generations.”

Martyn took up his post at the Stamford estate last November, following the departure of Elizabeth Inman, who previously held the position for 16 years.

He says horses have always been part of his life. He was an eventer himself, competing in 4* events – one level below those taking place at Burghley – before becoming involved in equestrian event management.

“I grew up with horses and then followed it as a career choice – to be honest I think it’s a bit of an addiction,” says Martyn.

“It’s a lifestyle. When I left school, I went to work in the eventing industry. I was competing myself, had my own business and riding other people’s horses and then I got involved, quite by accident, with helping to organise events.

“I come from Northumberland and found myself on the committee of a local event, and it just developed from there. One of the organisers left, and it was hanging in the balance as to whether the event would be able to go ahead, so I fell into it that way. It turned into a career and then led me here, to Burghley.”

Martyn says his role as LRBHT event director is very varied, as he oversees everything that is going on in relation to the staging of the horse trials – one of only seven CCI 5* events worldwide. This includes setting everything up, dealing with the 600 trade stands and exhibitors, the food walk and the sponsorship, as well as working with the established office team and other estate departments.

“Since starting here in November, it’s been very busy all-round. Usually, when things run in normal rhythms there will not be quite so much to do, but because we’ve not been running for three years now, it’s full steam ahead. It’s been very hectic,” explains Martyn.

“There’s a great team here, people who have been involved for a long time, we just wanted to get the event back and then we really hope that the visitors, and those who come regularly, have a good experience – that they come back and find what they know and love about Burghley, and enjoy that experience.

“And then we’ll get thinking about what we are doing for the next five-to-ten-year period.

“Burghley is a huge estate. As well as the horse trials, I’m also on the senior management team, as I need to understand what else goes on there, as I’m always liaising with the other estate departments.

“There’s so much that goes on with the forestry, the park land and the oak trees – it’s all about maintaining and preserving it for the next generations.”

The first Burghley Horse Trials took place in the Elizabethan parkland surrounding Burghley House in 1961 after the Marquess of Exeter, a keen equestrian, heard the three-day event at Harewood was cancelled due to an outbreak of foot and mouth disease.

He invited the British Horse Society to transfer the event to Burghley, where 19 competitors rode in front of a mere 12,000 people. Today the event has become one of the most popular and highly regarded within the equestrian and social calendars, ranking within the UK’s top ten national sporting occasions by attendance and drawing 170,000 people through the gates during the course of a week. It’s also a firm favourite with competitors who over the years have included HRH The Princess Royal, Captain Mark Phillips, Pippa Funnell and William Fox-Pitt, who is Burghley’s most successful competitor, having won the title six times.

“This year is a really big year – not only are we back after a three-year absence, but we are also going to be acknowledging the 60th winner, as well as HM The Queen’s Platinum Jubilee. There will be plenty of celebrations going on!” adds Martyn.

“This year is also about spending time, researching and maintaining what’s important, getting to the heart of what people love and understanding their needs.

“Then we’ll begin looking to the future to see if we do need to alter things, and if we do make any changes, they will be made for the right reasons – to secure the future of the event for generations to come.

“But for now, it’s a great honour for me to be here and we’re really looking forward to welcoming everybody back to Land Rover Burghley Horse Trials this September.” 