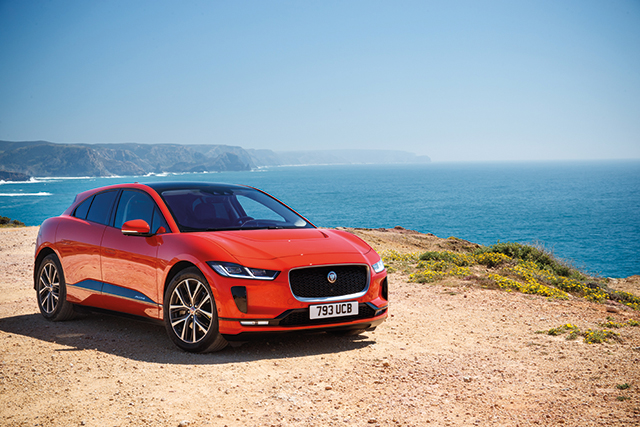 *The new I-Pace Jaguar is brilliant

After billions of pounds’ worth of development and testing the I-Pace is now a reality, beating the usual German suspects to market. Tim Barnes-Clay brings us the first drive review, putting the EV 400 First Edition through its paces on the road in Portugal.
Of course, it won’t be long before BMW, Mercedes-Benz and Audi are competing fiercely, but for now, Jaguar is steering this new segment of luxury electric SUVs. And as for Tesla, well, Jaguar isn’t too fussed about it. It says that even though the American-based corporation spearheaded the way for electric vehicles, its products aren’t as opulent. In other words, Jaguar doesn’t even recognise Tesla as a true I-Pace opponent.

So, what does the I-Pace look like? In short, it’s gorgeous. It seems better in the metal than in photographs – and that’s because its pleasing proportions are difficult to capture. It sits hunkered down to the ground and has a brawny stance with very short overhangs. There is just nothing else in the automotive arena that looks like it.

The I-Pace’s flush-floor and absence of engine mean the all-electric SUV is astonishingly practical and jam-packed with convenient stowage solutions. The armrest between the two front seats conceals a 10-litre cubby, and the centre console houses a couple of USB charging docks for smartphones. If that’s not enough, there are trays that can be pulled out from under the rear seats. Both receptacles are large enough to conceal an iPad or laptop.

The slender A-pillars, big windows and panoramic glass roof, fitted on the EV 400 First Edition model tested here, create an airiness and a feeling of room everywhere. Importantly, this isn’t just an illusion, there’s a respectable amount of space, particularly in the back of the I-Pace. Three adult passengers can fit comfortably with their feet tucked under the front seats. This is because the Jaguar doesn’t have a transmission tunnel. There is also good headroom, although things are a tad tighter when it comes to shoulder room.

The EV 400 First Edition’s boot floor is flat as a pancake with a cargo capacity of 559 litres. There’s also 28 litres of room where you’d typically find an engine. The rear load space bloats to 1,445 litres when the rear seats are folded down, meaning the I-Pace is smaller than the 1,550 litres offered by Audi’s Q5. That said, the non-electric German SUV provides 9 litres less luggage space (550 litres) – when its rear bench is in place.

Jump inside, and everything looks a little less unique than the I-Pace’s exterior. In First Edition variants the cabin is a mass of glossy wood, sumptuous leather and cool aluminium. Despite the bunch of battery cells under the Jaguar’s floor, the driving position is exceptional. There’s a lot of adjustment in the steering wheel and seat, and the enormous dashboard gives an impression of being inside an old-school long-bonneted Jaguar.

There is a lot of equipment and tech on the First Edition model, too. The limited run flagship is on sale for one year only and encompasses four-zone climate control, a heated steering wheel and windscreen. The car is also fitted with full leather and sits on 20-inch alloys. The rest of the line-up is named S, SE and HSE spec.

But whichever I-Pace you opt for, all models are kitted out with Jaguar’s infotainment unit. This consists of a five-inch display on the centre console and a 10-inch touchscreen on the dashboard. It looks good and is generally intuitive to operate.

The I-Pace gets moving via a quick press of a starter button and by selecting ‘D’ on the transmission. It glides off without a sound, feeling more and more planted the faster you go. The Jaguar is heavy (2.2 tonnes), yet it is agile and handles with real precision. This makes the I-Pace very different to other electric vehicles – meaning it’s a game changer for this sector of the automotive industry.

Indeed, what makes the I-Pace truly shine is its body control and steering. It weights up well, and when you turn quickly into a bend, the car stays flat. Then, when it comes to changing course, the I-Pace does so with liveliness, which is partially due to the suspension system that it shares with the Jag F-Type. The greater part of the I-Pace’s weight is also positioned low down to help cut the SUV’s centre of gravity.

With 400PS and 696Nm of torque on hand from a standing start, the Jaguar I-Pace is fast, with 0-62mph taking 4.8 seconds. Top speed is 124mph. So, using all the I-Pace’s battery power is good fun, but it doesn’t last forever – it inevitably needs charging up again. Jaguar claims the SUV will achieve around 298 miles between charges. Plugged in for 40 minutes using a 100kw charger, like the one we used in Portugal, you’ll get approximately 240 miles. But the issue here is that we don’t have any 100kw chargers in Britain. What we do have are 50kw chargers – and these take 85 minutes to give the same range. But most I-Pace consumers will charge up at the office or home from a 7kw wall box – and that takes more than 12 hours to give a full recharge.

At £81,495, the EV 400 First Edition isn’t cheap, especially when compared with Tesla’s $35,000 (£26,355) Model 3 electric offering. But, as we’ve said, Jaguar doesn’t see Tesla as a competitor in the luxury electric SUV sector. The I-Pace is very firmly a premium car that’s priced fittingly. Far more importantly, it’s also an electric vehicle that you’ll aspire to drive – unlike a first-generation Nissan Leaf or, say, a G-Wiz.

Naturally, there will always be a bit of ‘range anxiety’ with an all-electric car, but with a range of well over 200-miles, the I-Pace will easily sort out the needs of most buyers. Be that as it may, some drivers still won’t feel comfortable with it. But what won’t deter people is the way the Jaguar drives – it’s just so quick and handles beautifully. It’s also comfy, calm and capacious – all the things that count on a daily basis.

Jaguar has triumphed in not only building the finest electric vehicle ever, it has also produced one of the most exhilarating large cars you can purchase.