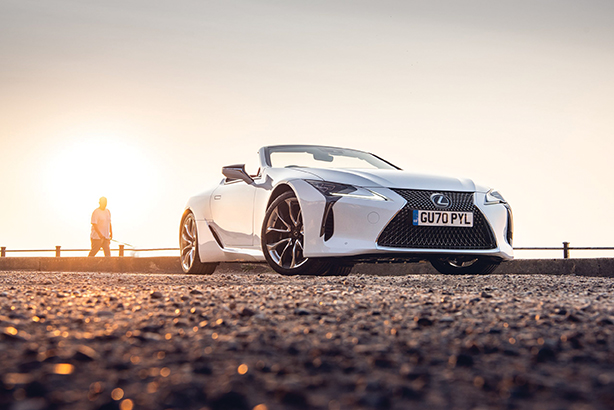 The Lexus LC Coupe has always looked impressive and elegant at the same time. With fluid flanks, a low-slung roofline, and razor-sharp lights, it never fails to create a sense of theatre. But now Lexus has stepped the pace up further, by ushering in a brand new soft-top version – called, funnily enough, the LC Convertible.
The all-new car shares the LC Coupe’s gorgeous design and adrenaline-charged performance while adding the fun associated with wind-in-your-hair motoring. And, as with the hard-topped model, a non-turbocharged unit sits under the hood. This alone makes the LC different. Why? Well, there’s a glut of turbocharged cars out there, so a burbly, normally aspirated 5.0-litre V8 lump kind of forces you to take notice.

Furthermore, the LC is armed with a ten-speed auto ’box. There are so many gears that you rarely need to ask for more engine power because you can compensate with the precisely assembled collection of ratios.

The muscle and range of cogs help the Convertible blast to 62mph in 5.0 seconds, and on to a licence-losing top speed of 168mph. The timbre of the V8 pulling in air as the throttle input changes is as gratifying as it is galvanising.

As well as the glorious sound the LC makes, there are other plusses to its atmospherically nourished powerplant – and that’s throttle feedback. Any weight, however slight, that’s added to the accelerator pedal has an instantaneous influence on forward propulsion.

Gearshifts are on the ball and clear-cut too. The steering-wheel-attached paddles are pleasingly weighted and lovely to operate. But, if you don’t want to experience changing gears by hand, the auto mode does a great job.

The LC Convertible’s ride is firm, but there’s loads of control, so any sense of inflexibility is worth it. The Lexus’ body feels robust, too, with no indication of agitation from the shell, even over tatty tarmac. The steering is pleasantly light as well, so it’s unchallenging to point the LC’s snout in the direction you want it to go. Indeed, every aspect of the Japanese-made car, from the feel the chassis provides to the engine and steering, enables you to drive the new model with confidence.

If top-down luxury motoring is what you’re after, then the LC Convertible is a beautiful choice of car. The roof can be lowered or raised in just 15 seconds, and its refinement and kit list, including Android Auto and Apple CarPlay, make it hassle-free to live with.

In its most fundamental form, the model is priced at £90,775. But the £96,625 Sport+ Pack grade is the one to have. It comes with 21-inch wheels, integrated neck heaters and semi-aniline leather upholstery. Yes, it’s a lot of money, but not many drop-tops provide the same level of elation as well as sophistication. The fact that the LC Convertible also looks good enough to eat makes it impossible to dislike.