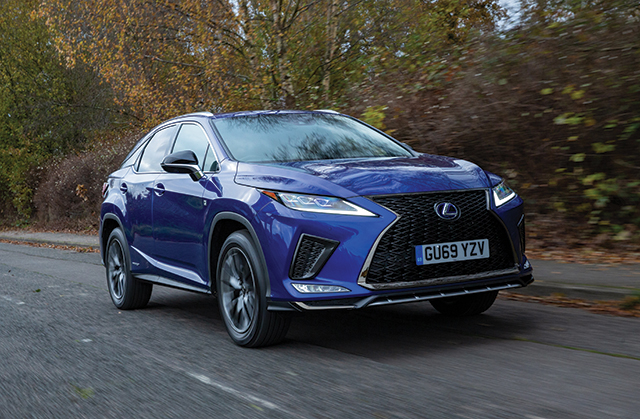 The latest embodiment of Lexus’ RX 450h has entered the British motoring market. It is the jewel in the Japanese luxury brand’s SUV line-up – and you can tell. Check out its new sharp lines and that angry ‘in your face’ grille… Coy, it is not.
Of course, it’s not all about looks, and the RX is grown up enough to realise it. After all, the model was on the scene as far back as ’98, before SUVs were even a ‘thing’.

Over the last couple of decades or more, around three million RXs have been sold. What’s more, the SUV became the world’s first luxury self-charging hybrid when the RX 400h was ushered in during 2005. The current, fourth-generation RX pushed the limits of the luxury SUV even further on its debut in 2015.

The newest RX has benefited further from improvements in a series of design, dynamic and technical upgrades, implemented as part of its mid-lifecycle. But one thing that isn’t new is the powerplant – a 3.5-litre V6 petrol propelled unit. Due to rules on emissions, it’s not often you find engines like this in anything other than high-performance motors.

However, the block endures because it’s joined to an electric motor. Together, over 300 horsepower is produced, with mid-30s mpg returned. Furthermore, the car only emits CO2 emissions of 134g/km.

The strongly-styled vehicle drives as impressively as it looks – but there’s more to it than that – and it’s almost undefinable. Let’s just say the RX 450h has a unique way of going about being a sizeable SUV. That makes it something of an individual in a segment often lacking in characterful cars.