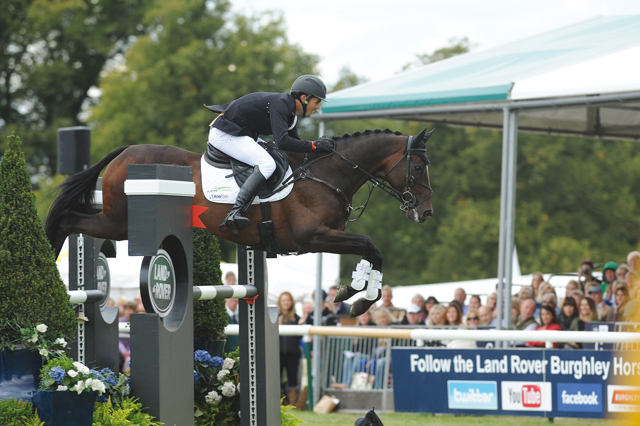 The Land Rover Burghley Horse Trials never fails to thrill and enthral and this year was no exception.
Certainly there are few better stories than that of this year’s winner, Jonathan ‘Jock’ Paget – from bricklayer to history-making Land Rover Burghley winner in just over ten years with an Olympic medal and a Mitsubishi Motors Badminton win in between.

The twenty-nine-year-old New Zealander, who trounced the sports superstars at Mitsubishi Motors Badminton in May, repeated the success with a pillar-to-post victory at Land Rover Burghley on Frances Stead’s and Russell Hall’s Clifton Promise, a thirteen-year-old New Zealand thoroughbred bred for the racecourse. Paget is the first person since British eventing legend Ginny Leng in 1989 to win Mitsubishi Motors Badminton and Land Rover Burghley in the same season and on the same horse and is certainly the first New Zealander to do so.

“It’s really only just sinking in that I’ve won Mitsubishi Motors Badminton, let alone Land Rover Burghley, but I know that it’s a very special achievement,” said Paget, who is now based in Surrey.

The two consecutive wins means he is set up for a potential Rolex Grand Slam – a $350,000 bonus if he can win the 2014 American Rolex Kentucky three-day event next April. It is a feat so extraordinary that British rider Pippa Funnell is still the only rider to have achieved it back in 2003.

The final Sunday at Land Rover Burghley was a day that will go down in New Zealand sporting annuals. Not only did Paget head a New Zealand one, two, three but his fellow riders achieved six of the top ten places – three of them by Olympic veteran Andrew Nicholson who in doing so made another piece of Land Rover Burghley history.

The fifty-two-year-old was second on last year’s winner Avebury and third with his Olympic team bronze medal ride Nereo, and for good measure eighth with Calico Joe – another whose original destiny was racing. Nicholson also produced two of the three cross country rounds over Captain Mark Phillip’s revamped thirty-one-fence track, inside the time; Paget, the other.

“It does feel like a great achievement to have been so consistent and that’s really what staying at the top is all about,” said Nicholson, the official World Number One, who rounded off his best season ever by claiming the HSBC FEI Classics™ title – for the rider gaining the most points at the year’s leading three-day events – and its $150,000 first prize.

Six times Land Rover Burghley winner and recent European bronze medallist, William Fox-Pitt once again was the one to keep Great Britain in the frame in fourth place with his 2011 Land Rover Burghley winner Parklane Hawk. His former team compatriots, Kristina Cook, tenth with her homebred De Novo News, and Nicola Wilson, eleventh with the effervescent Opposition Buzz, were the only other British riders in the top sixteen in what was not a vintage year for the home side.

It was, however, a great year for Germany’s fifth placed leading lady Ingrid Klimke (Butts Abraxxas) who, despite being a much feted Olympic medallist, was riding at her first Land Rover Burghley. “I wanted to see what a real English course was like and it has been my dream to come to Land Rover Burghley and as Abraxxas is sixteen years old it was now or never,” said the 2013 European silver medallist.

Land Rover Burghley 2013 also proved special for another Land Rover Burghley first-timer, local rider Alex Postolowsky. The twenty-eight-year-old from Market Rasen finished in 36th place with Islanmore Ginger and won both the prize for the highest placed British rider competing for the first time and the HSBC Classics training bursary for the highest placed rider never to have previously competed at the level.

“To get to Land Rover Burghley is a dream come true – it’s the icing on the cake. Ginger is my horse of a lifetime and I owe him so much,” said Alex who also gained second place in the Dubarry Burghley Young Event Horse Final with her own All or Nothing II.

And if the size of the crowds is an indicator of success Land Rover Burghley was a triumph. The Park – once again looking at its glorious best in the soft early autumn light – was bursting with enthusiastic supporters and many more who came to enjoy the park, the atmosphere and take part in two of the great British pastimes – picnicking and shopping. All of this combined with a weekend of exciting, top-class history making, international sport made this year’s Land Rover Burghley not only special but exceptional.