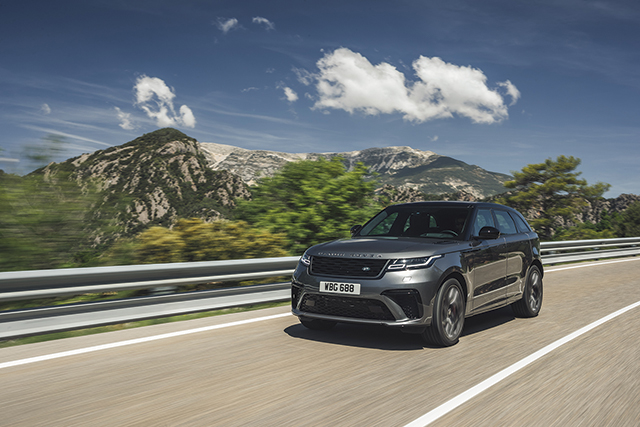 Edición Dinámica – The Velar SVAutobiography Dynamic Edition squeezes Jaguar Land Rover’s largest and most charismatic engine under its clamshell bonnet – the famous 5.0-litre supercharged V8.
You’ve probably heard all about it after its stints within the likes of the Jaguar F-Type and Range Rover SVR, but just in case you haven’t, here’s what to expect: 550PS, 0-62mph in 4.5-seconds, a top speed of 170mph and a big, throaty gargling of thunder for a soundtrack.

To help get this powerful car down from the high speeds that it is comfortably capable of, big brakes have been fitted – 395mm at the front and 396mm at the rear. Land Rover says these speed scrubbers have been engineered to help deal with the larger amounts of excess heat brakes like this can build up, and when you have the power that this new Velar does, they’re worth their weight in gold.

The Velar is the mid-size luxury SUV underneath the Range Rover umbrella and so switching its heart around for the V8 has a drastic impact on its character. But its engineers have decided not to go all-out, this isn’t a full-fat shirt-ripping ‘SVR’, so it has retained a high level of the refinement it had before.

As such, this Velar feels like a Grand Tourer, with its weight, large wheels and potent engine giving it a firm but comforting ride. When cruising, the air suspension helps it feel rather sedate and calm, but when you apply your right foot out of corners, it squats down at the rear and sends you out with a real punch. It’s a happy medium between the realms of all-out lap-time chasing performance and everyday usability and refinement.

The interior of the Velar feels quite minimalistic now, and it reminds me of what Volvo is doing with its interior design, decluttering the cabin and making everything simple and easy. It helps clear the mind because we always feel very relaxed when driving these cars, even with the performance on hand in this particular model.

There’s a nice use of rich quality materials once again here. The leather in this version of the Velar is exclusive to the car and feels lovely to the touch, and the seating that the pelt covers is heated and cooled. Getting the right seating position shouldn’t be too difficult either, being 20-way electrically adjustable.

When it comes to practicality, it’s still a Velar, so there’s no penalty to the overall space offered by the standard car. There’s good head and leg room for adult passengers and plenty of little areas to store things like drinks bottles and snacks. What’s more, the boot offers 558 litres worth of load potential with the rear seats up, expanding to 1,731 litres with the rear seats folded down. Those seats also fold 40:20:40, so you’ve got some flexibility there with regards to shape.

Of course, there’s just no getting around the fact that this Dynamic Edition of the Velar is expensive to run. Most of the buyers interested in this car probably won’t be worried about this whatsoever, but for those who are here’s what you can expect.

The official fuel efficiency figure is around 23mpg, but if you manage to achieve over 18, you’re going to be doing pretty well (or not enjoying yourself quite as much as you should.) The fuel tank is 82 litres in size, meaning you have a range of over 300 miles, but it’s going to cost you more than £100 a pop to fill it up. What can I say? All-wheel drive V8-powered luxury SUVs aren’t cheap to run.

And where protection is concerned, the Range Rover Velar has a five-star safety rating from Euro NCAP testing, meaning it’s among the safest machines you can go out and buy. Found across the Velar range are systems such as dynamic stability control, roll stability control, autonomous emergency braking, front and rear parking sensors, a reversing camera, rear traffic monitoring and more.