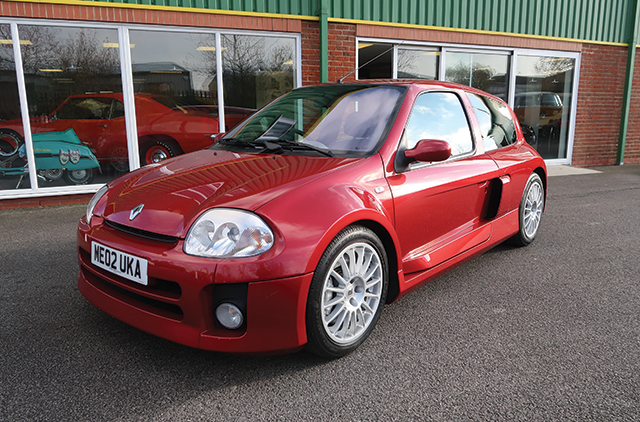 At Woldside Classic and Sports Car in Louth they have what Evo magazine proclaimed on the car’s launch in 1999 “the world’s smallest supercar” and it is easy to see why: the rear seats were sacrificed to accommodate the 3.0V6 engine producing 230HP, it was mid mounted to create the ultimate rear wheel drive hot hatch – The Renault Clio V6 Phase 1.

A spin off from the Renault Clio Trophy race car series the Clio V6 Phase 1 was previewed at the Paris Motor Show in 1998 and finally made production in 2001. The car was 300kg heavier than the 172 Cup and was considerably more powerful. All of the Phase 1 cars were hand-built in a factory in Sweden with the parts being supplied by Renault France by TWR (Tom Walkinshaw Racing) who had achieved great success developing cars in both the British Touring Car and World Sports Car Championships in the late eighties and early nineties.

The Phase 1 cars were built for just two years and only 1,513 cars were built in total, with just 256 cars destined for the UK. Of these 256 UK cars, the majority were Iceberg Silver with just eight Illiad Blue and twenty-five Mars Red produced. According to information website How Many Left? there are only 154 cars still on the road, with Woldside Classic and Sports Car’s Clio being one of the rare low production Mars Red cars, with a build number of 101 displayed on the centre console plaque.

It was registered in June 2002, has had just one previous keeper and has a low mileage of 56,000. The handbooks are within the car and the stamped up service book verifies the low mileage. Recent invoices show major expenditure including servicing, cambelt replacement, gearbox rebuild with new clutch and a suspension overhaul with original equipment parts and four-wheel alignment.

Whilst at Woldside Classics it was decided that the car, being such a low mileage example with only one previous owner, should be refreshed to a standard as close to new as possible. This included removing all the fibreglass body panels and giving the car a full re-spray. The wheels were refurbished and fitted with new Pirelli tyres. The inside of the car was in great condition, although the materials to the dashboard and centre console were starting to deteriorate with age. They decided to do a full strip down and remove the dashboard and condition it to a new standard. The seats and carpets are in lovely, original condition as you can see in the video they have produced of the car, which can be seen at: https://www.youtube.com/watch?v=NiorBhgW-Dk

This unusual Mars Red Phase 1 car is of the highest standard available. It is priced competitively in today’s emerging young classic hot-hatch market and they are confident this is one of the nicest cars on the market and worthy of any collector.

You can see the Clio in their heated showroom at Tattershall Way, Fairfield Industrial Estate, Louth LN11 0YZ or visit www.woldsideclassics.co.uk where there are photos and a video presentation of the car.