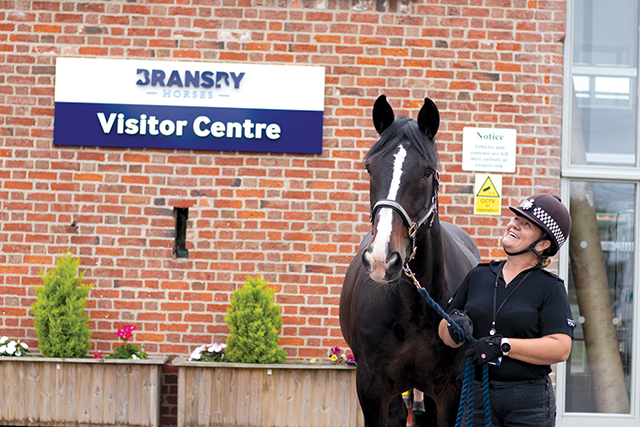 Bransby Horses is delighted to announce the arrival of two ex-Greater Manchester Police (GMP) horses into their care after a combined 13 years of public service. 18-year-old Irish Draught, Captain, and 17-year-old Irish Sport, Steele, will enjoy their retirement in the heart of the Lincolnshire countryside.

Captain
After beginning his career with GMP in 2013, Captain attended a number of high profile events and served alongside fellow retiree, Steele, on many occasions. Following increasing lameness earlier this year, Captain was retired in June after eight years of service and swiftly found a permanent safe haven at Bransby Horses to spend his retirement.

Described as the perfect example of a police horse, Captain was a firm favourite with grooms and officers, was a pleasure to work with and will be sorely missed. It is safe to say nothing fazes Captain. So much so that every officer at the unit had done some form of big event with him. Captain literally did it all; he led Manchester City FC victory parades, worked at festivals and countless peaceful protests, and a number of Manchester derbys.

On his arrival, Captain was very calm and spent time scanning his surroundings when coming down the ramp. GMP handlers and Bransby Horses colleagues were on hand to ensure he felt comfortable and safe in his new home.
Watch Captain’s arrival at: https://youtu.be/lJcIQVakmA4.

Steele
Steele is described by his handlers as “in a league of his own”; brave, very athletic, affectionate, intelligent and funny, though could be feisty following a difficult start in life. He started with GMP in 2010 at age six and it didn’t take long for him to bond with a trainer.

In 2012, Steele was introduced to events and it was at this point that his GMP career really began. Following nine years of service including attendance at extraordinary scenes such as patrolling the city in the aftermath of the Manchester Arena bombing, Manchester Pride, Parklife Festival and the first major potential terrorist evacuation of Manchester United Football Club, Steele has retired earlier than expected due to failing eyesight.

Reunited
Captain’s arrival in late July meant only a short separation until being reunited with fellow police horse, Steele in early August. Bransby Horses’ external welfare manager, Rachel Jenkinson, travelled to Manchester to meet the pair before transportation and got to speak to their handlers who were very sorry to see them go.

Officer Kate Garside said: “Captain is a gentle natured, unassuming, quiet horse who believed in every rider who sat on him. He is the horse that has made many of us mounted officers. He really is one of the bravest of police horses to have graced Hough End Stables, and also one of the sweetest.”

Rachel said: “We’re very lucky to have them and we hope they enjoy a very long and happy retirement with us at Bransby Horses.”

Please visit the Donated Goods page on the Bransby Horses website to see what goods can be accepted in kind, and as always, thank you for your support.

For more information about Bransby Horses and the work they do, visit BransbyHorses.co.uk or find them on social media.