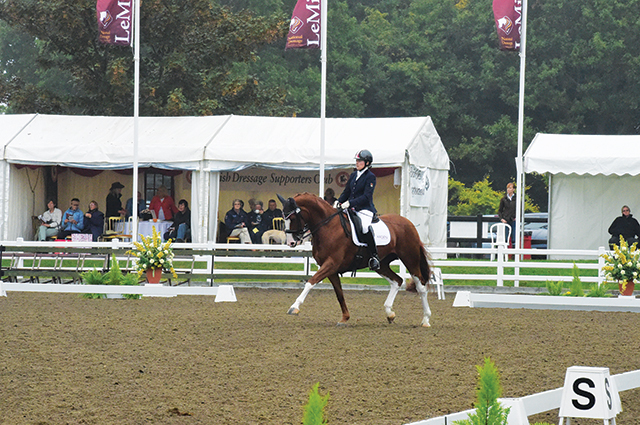 She lives by the motto ‘If you can dream it, you can do it, when you believe it!’ and para-equestrian rider Roberta ‘Bert’ Sheffield is about to realise her biggest dream yet: competing in the forthcoming Paralympics in Rio de Janeiro this summer.
Bert (35), who has rheumatoid arthritis, lives in Bourne, but will be representing Canada at the prestigious games, where she plans to ride her top horse Double Agent in the Dressage Grade 3 discipline.

The former Stamford High School pupil has high hopes too, having won the British Dressage Para National Championship on the same horse in 2014, the year she also finished fourth in the World Equestrian Games in Normandy.

“I was born into an oddly sporty family,” explains Bert. “My mother is horsey and my dad was a world champion Skeet shooter.

“I learnt the value placed on sporting success early. I grew up surrounded by elite sportsmen and women of many different disciplines and their entourages. As a result, I have never seen these extraordinary athletes as anything other than ‘just’ people. I could see the value of all the preparation and the back-room boys working behind the scenes to allow the athletes to succeed.

“I’ve had medals hung around my neck since before I can remember – now, I want my own.

“I was fourth in the World Championships, which is possibly the worst place to come and I’m determined I can go one better.”

Bert’s passion for horses began when she was five years old and followed her best friend to the stables for lessons.

“I started at the local riding school and then I got my first pony when I was about six, and that’s when I started doing a bit of a showing and dressage,” she recalls.

Bert was forced to give up her riding for a time when she was diagnosed with rheumatoid arthritis (RA) – an autoimmune disease that causes inflammation in the joints, leading to pain and swelling – when she was just fifteen.

“I have it in all my limb joints, my neck, shoulders and jaw – it started when I was a teenager and has progressed through my body.

“I was initially epileptic – the drugs used to treat that distorted my brain, and then the RA my body. It was a real double whammy. It all left me very depressed and took me several years to get through it,” she says candidly.

“Although it’s painful and makes life awkward, RA has given me the opportunity to compete in top level Para competition, which gives me tremendous freedom from my condition. I use straps from the stirrups to the girth, to stabilise my lower legs and bobbles on the reins to help me grip.”

Bert manages her condition with Anti-TNF medication and painkillers and also has regular chiropractic treatment to help keep her body working evenly. She also follows a vegan diet.

“If I don’t move enough, my body starts to swell up and goes ‘crunchy’ – so the more I move the better.

“Although I also have to be aware not to overdo it too. I have to control it the best I can; because of the nature of it being systematic fatigue is also a big problem.

“But riding horses is very good for the soul and for keeping your spirits up.”

Bert was nineteen when she returned to the saddle and it wasn’t long before she won at the prestigious Royal Welsh Show – the biggest in Europe – which she likens to Crufts for ponies.

After completing a politics degree at Aston University she continued to pursue her dream career and went to work as a groom for GB dressage rider Gareth Hughes, with whom she later started to train.

It was Gareth who encouraged her to start Para riding, and up until 2014 she competed for GB, although was finding her age a stumbling block when it came to selection.

Thanks to her mum being Canadian, Bert has dual nationality, so was able to switch to ride under the maple leaf and she’s now met all the qualifying criteria for Rio ’16.

“There are advantages and disadvantages to me being here and the rest of the team being based in Florida. Para dressage is a very Eurocentric sport so it makes a lot of sense to be based in Europe – I’m able to do a competition every week; if I was in Canada there would be less opportunity, plus we go on an annual European tour together each year,” she adds.

As for this year’s games, Bert is focussed and confident her horse Double Agent – a nine-year-old British bred mare – is ready to face the competition.

“She just needs to be strong, fit and polished – she’s already beyond the level she needs to achieve, but just like humans they can overtrain,” she says.

“When it comes to the games, I’m just going to take it as it comes, I want to experience it while I’m doing it rather than have preconceived ideas – what will be, will be.”

To find out more about Bert, and follow her progress visit www.bertsheffieldparaequestrianrider.com