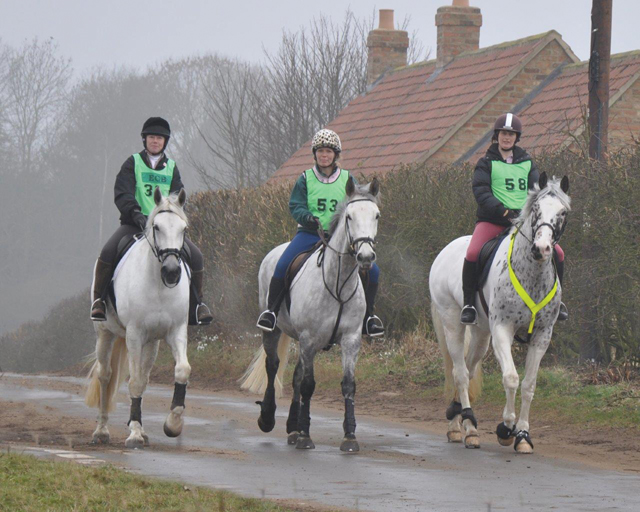 Riding from the Fens to the Wolds

What better way to enjoy some of Lincolnshire’s most spectacular scenery than from horseback?
And one group of riders is doing just that, and making lifelong friends in the process, thanks to their membership of the Lindum Endurance Group.

The county’s long-distance riding group was formed more than thirty years ago, when back in 1981 one lone rider set out on the Endurance Horse and Pony Society’s (EHPS) first Pleasure Ride held in Metheringham. Despite the poor turnout, the organiser repeated the event the following year and it was a great success.

Today the club boasts more than fifty members of all ages, who regularly get together to enjoy hacks at various locations around the county, and beyond.

Despite their length – the ultimate long distance ride is 100 miles (160Km) – the club’s events are suitable for riders and horses of all abilities, and include a range of social as well as more competitive events.

And as well as keeping your horse fit, the group says there is also a great social side to endurance riding, which isn’t always experienced in other equestrian disciplines.

“The Lindum Endurance Group is a group of people who are keen on riding and enjoy the countryside,” explained the group’s chairman, Karen Pammenter.

“We ride various routes using bridleways, quiet roads and also private land thanks to the kind permission of landowners, with our routes varying from five miles up to 100 miles – all in one day. It can be quite challenging, which is what a lot of people like about it. Plus you get to see some wonderful scenery riding in this county; you can ride with company, or on your own as you want to and challenge how far you want to go.”

The group is open to anyone capable of riding, with no upper age limit.

“Endurance riding is not really a spectator sport; as all the horses start off from the same point, there’s nothing else really to see,” Karen added.

“But for the riders, there’s a great social side, plus you don’t have to invest in any fancy gear or special safety equipment like other riding disciplines. We’re always keen to welcome new members along to give it a go.”

The Lindum group is part of the Endurance Great Britain national body and holds meetings for members every six to eight weeks in Ludford.

Based on the American model for endurance riding, the Lincolnshire branch was initially linked with Nottinghamshire.

As time progressed the two counties separated into their own individual groups and the Lindum club was formed, taking its name from the Roman word for Lincoln.

Vice-chairman Thay Stephenson, who has been a member since the 1980s, said: “Endurance riding is really about the relationship you have with your horse, and what you put in. I find that, unlike some other equestrian disciplines, with endurance nobody else can influence what you do with your horse.

“It’s also nice knowing that you are going to go on a specific route that’s all set out, without encountering issues like a locked gate, or going onto someone’s private land, and we’re helping to keep the bridleways open too. But it’s very difficult to give people a taste of what it’s like, unless they actually come along and have a go for themselves.”

This year the group has enjoyed rides all over the county from the Fens to the Wolds – with venues including Danethorpe, near Newark, right up to Wootton, near Immingham.

Riders new to endurance usually start off with the group’s social rides, which can range anywhere from five up to twenty miles (eight to 32km). And riders are encouraged to go at the pace they feel most comfortable with. Thay explained that those who wish to take things to the next level can then try their hand at a leisure ride.

“Most people that come out on their horses, are capable of doing a twenty-mile leisure ride without too much of a problem,” she said.

And for those who wish to ride even longer distances, and more competitively, there are national EGB rides, the ultimate being the 100 miles in one day event. Horses taking part in these competitive distances are subjected to thorough veterinary inspections to ensure their safety and wellbeing.

The biggest endurance ride on the national calendar is also held on Lincolnshire soil at Market Rasen Racecourse every July. Lasting five days, this mammoth event attracts riders and their horses from all corners of the country, from as far afield as the Isle of Wight to Scotland.

Around sixty classes are contested, ranging from shorter distances up to 100 miles, and unlike other endurance events, it’s more suitable for spectators as there’s much more going on with other displays and trade stands. The whole event is run by volunteers, including members of the Lindum group, and as long as horses are vaccinated and healthy they are eligible to take part.

During the longer rides, the animals competing are subjected to various checks at regular intervals and given rest periods to make sure they are not dehydrated or suffering the effects in anyway.

“It really is a great way to enjoy horse riding,” Karen added. “You get to meet some wonderful people, everyone is very supportive, and we’re always keen for new people to come along and give it a go.”

The long-distance riding season runs from January to October, with the majority of events held in the spring and summer months.

There is a small cost to attend one of the Lindum events, which is £9, and for which riders will receive a rosette and refreshments afterwards.

* For more information about the group, its ride schedule and becoming a member visit www.lindum-egb.info