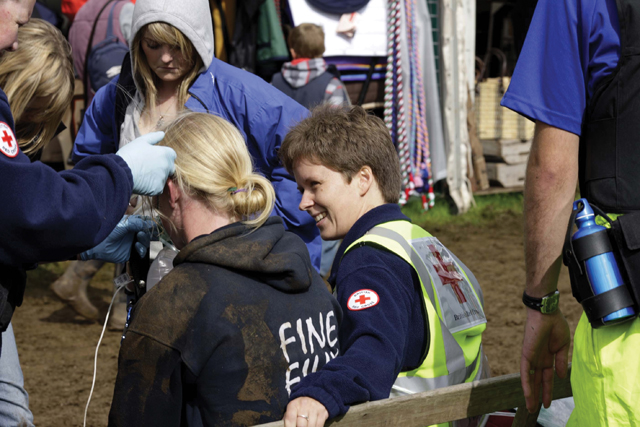 The Land Rover Burghley Horse Trials is Lincolnshire’s best attended event. Like a swan it is magnificent to look at and the ease with which it glides along hides a powerhouse of energy and activity.
The Event, which runs from 1-4 September, owes a lot of its enormous success to the vast team of volunteers who work cheerfully and tirelessly, often behind the scenes, to set up and man the event. One of these ‘secret heroes’ is Edith Wesley. Edith, who lives 12 miles from Stamford in Bourne, is the senior services manager for the British Red Cross — Lincolnshire, Leicestershire, Rutland and Northants. She heads up the team which provides first aid support over the four days of the Land Rover Burghley Horse Trials, a role which she has undertaken for the past 12 years. In total she has been involved with the Horse Trials for 28 years.

“I find it tremendously exciting,” she says. “You go from gasping in astonishment to having fits of laughter — you never know what or who is going to walk in the door next.”

On Saturday, Burghley’s busy cross-country day, the Red Cross provide 150-160 volunteers who work alongside St John Ambulance and the East Midlands Ambulance Service, as well as a ‘whole raft’ of doctors.

“What I love about the Event is the challenge and the dynamics — how it changes and grows every year but also has terrific continuity. It is great to see our volunteers, who come from all the surrounding counties, grow with it,” says Edith.

“Gone are the days of the little village fete — although we still do those,” she says. “The Red Cross is now at the stage where it is a professional organisation that has to meet standards and be accountable to beneficiaries. We ask a huge amount of our volunteers, but they always rise to the occasion. An event like Burghley Horse Trials also helps to train us in emergency response and prepares us to deal with major emergences like flooding or a tsunami.”

On the Saturday of the Event, Edith’s day begins when she and service manager Bill Tate — who heads up the main first aid field hospital — arrive at 6.45am.

“We meet the overnight crew, catch up and do a dynamic risk assessment of everything that’s happened. The first aid post is open from 8am, so I check all the supplies are in place. On the previous Sunday’s training day, we will have been round all the cross-country jumps and designated teams accordingly.

I do the 9am briefing, then hand over to Bill to go through radio use and the procedure when dealing with a major incident. The volunteers head out to their posts at 10am — nine times out of ten they will have worked with those fence judges before. There is a radio check at 10.15am, then I go to radio control near the Lion Bridge, where I spend the rest of my day until the last rider jumps the last fence.

“Everything is planned and prepared to the very last detail. We can cope with anything from a minor cut to a serious injury.”

Edith wishes to give credit to “a very dedicated team of ladies”, led by Mavis Thurlby from Stamford, who run the refreshment wagon and support the crèche, the first aid volunteers, the doctors and the police.

“They are the hub of the Land Rover Burghley social network,” she says. “Mavis is there every year by 8am. We simply couldn’t do it without those sorts of people.”

It is the tight-knit spirit of the people that work there that Edith loves about Burghley — that and the shopping.

“On Thursday and Friday I get back to basics and work in the first aid with the volunteers — but I do enjoy a little retail therapy,” she says. “The quantity and quality of the exhibitors have grown immeasurably in the time I’ve known it. And it’s such a social event.”

Burghley Horse Trials celebrates its 50th Anniversary in September attracting visitors from all around the world. This international competition attracts the very best horse and riders from around the globe for four days of dressage, cross-country and showjumping. It will be an important stage post in the build-up to the London 2012 Olympic Games and Paralympic Games, with many of the same partnerships competing in both events. And the stunning location, in beautiful parkland with the backdrop of one of the country’s most attractive and historic houses, is unique. Add to that the best shopping you will find anywhere — delicious local produce, luxurious fabrics, clothing stands that range from the elegant to the quirky to the practical, country crafts, handmade shoes, boots and belts, bespoke kitchens and furniture, glamorous jewellery — and you’ve got the best day out Britain can offer.

This year’s event, marking the Trials’ 50th Anniversary will take place on 1-4 September 2011. For more details and ticket information telephone the Box Office on 01933 304744 or visit www.burghley-horse.co.uk