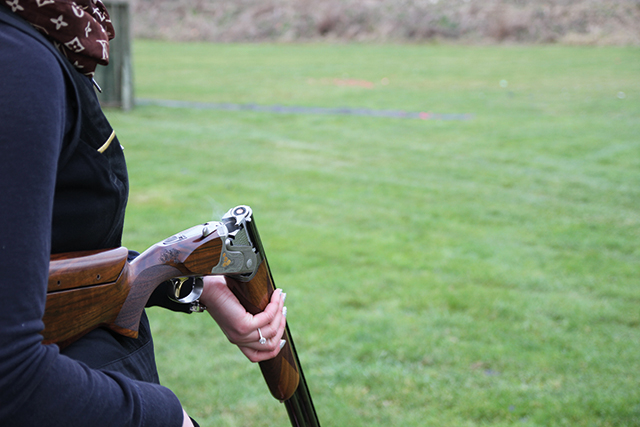 Last spring I travelled to the beautiful Nettleton Lodge clay shooting ground near Caistor, with my family in tow, to take part in the Grimsby Rotary Club’s inaugural charity clay shoot. The club, part of Rotary International, is a social club with a strong emphasis on fundraising, and ‘service above self’ is their motto.
The guests were a mixture of keen clay shooters as well as many that had never shot before, and, as I’m active in encouraging more women into clay shooting, it was particularly fabulous to see some women joining in too.

All took part in the fun competition and whilst some had their eyes on the prize, the guests were mainly there to have fun and enjoy the day, whilst raising some vital funds for various local charities.

Although I held my own against most of the clays, there was one particular ‘extreme’ target; a high, fast, right to left crosser, that evaded me despite my repeated attempts. However, overall I was thrilled to put the highest ladies score in, securing myself the top cash prize which was, in the spirit of the day, swiftly donated to the charity pot.

The Rotary Club is busy planning this year’s charity shoot, which will take place on Saturday 28th April once again at Nettleton Lodge. President Mike Bull said: “Our charity shoot is in its infancy but last year’s event was a great success. We raised around £1,000 which was a welcome addition to the £6,500 which was raised at our Charity Golf Day in July.”

The club’s chosen charity for 2018 is North East Lincolnshire Women’s Aid – a local charity that supports victims of domestic abuse, a cause particularly close to my heart and a very worthy cause. This year’s event has the backing of some local businesses such as the Axholme Brewing Co and Samuel Neale Kitchens, however the organisers are seeking additional sponsorship from any other firms that might like to get involved and help boost the funds raised for this worthwhile charity.

Building on the success of last year’s fundraiser, the club plans to make the shoot even bigger and better and is set to welcome lots of newcomers to an event that will cater for all the family. Shooting will begin at 1pm and the last entry is 4pm. The cost per entry is £25 for forty sporting clays over five stands.

Spectators will be admitted free of charge. There will be provision for beginners too, so whether you’ve never held a gun before, or you’re a clay shooting addict, it should be a good afternoon.

Individual and team cash prizes and spot prizes will be awarded as participants can shoot as an individual or as a team of four. There will be a food tent and hot and cold drinks will be available, plus raffle tickets will be available to purchase on the day.

Clay shooting is a sport for people of all ages and physical abilities, so Mike Bull and his team from the Grimsby Rotary Club hope that you will bring your family and friends along to have a go.

For more information about the charity shoot, or if you’d like to donate a raffle prize please get in touch via email to mgbull@ntlworld.com