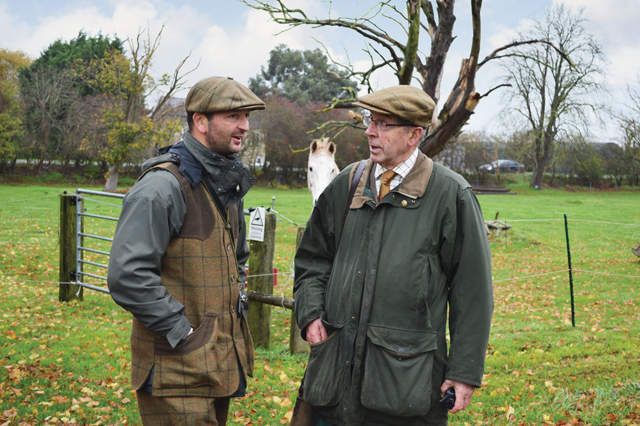 My report this month comes from the south of our county. It is a shoot that is probably not on everyone’s radar in terms of great shoots, or recognised by the size of its bags on shoot days. This is a wild bird shoot, where the emphasis in on quality not quantity and trying to maintain the tradition of trying to outwit the wild fen pheasant.
I was kindly invited to Vine House Farm at Deeping St Nicholas by the owner Nicholas Watts, to join them on a shoot day in mid-November. Nicholas already has an enviable reputation as a conservationist and ornithologist, as well as being the holder of numerous awards for his efforts, including the prestigious MBE in 2006. He is also widely known for his Vine House Farm bird seed. Growing more than 400 acres of seeds including sunflowers, millet, canary seed as well as oats, wheat and rapeseed, he is ably assisted by daughter Lucy who looks after this side of the business – she would also be shooting with us on the day.

Farming just under 2,000 acres, the shoot is typical fenland – often large fields, flat as a pancake with few trees. Traditionally this would have been walked-up shooting, taking advantage of the numerous wide dykes that criss-cross the landscape, but with the advent of driven shooting it was soon realised that the wild fen pheasant presented a special challenge. Generally a bit smaller than the traditional ringneck and certainly slimmer and fitter than most of the reared pheasants that we are familiar with, it also has to be approached in a different manner if guns are to stand a chance of putting some in the bag, as I was to discover as the day unfolded.

The day started with the usual meet and greet in the kitchen, with Nicholas and his wife Ann greeting friends and family before drawing peg numbers and giving instructions for the day. Bearing in mind this is a wild bird shoot, only one hen bird may be shot by each gun on any one drive, so mainly cock birds, partridges and ground game being allowed, provided the shot was safe. Guns were also advised that silence on our approach to each drive was imperative, as wild fen birds don’t behave like reared birds on more traditional shooting estates and will make an early exit if frightened.

A ten-minute drive in the shoot trailer brought us to the first drive known as ‘Gull’, a cover crop of miscanthus, more commonly known as Elephant grass. Often eight feet high, it provides warmth and shelter to all manner of wildlife in what is frequently a cold and windswept landscape.

From the minute the beaters arrived at the other end, pheasants were starting to make their escape. This is totally unlike reared pheasants that tend to sit tight until they are forced to get up and fly by the beaters or a questing spaniel. Once on the wing, these birds accelerated and climbed to a great height, giving the guns a real challenge in the stiff southwesterly wind.

With the drive over and about a dozen birds collected, we climbed aboard the trailer to head off to the next drive. This gave us a chance to chat and for Nicholas to tell me that he felt that we were seeing the last days of the true wild fen pheasant, as modern farming did not lend itself to giving this bird the required habitat and conditions that it needs to survive. Also, the blanket protection of some predators, particularly badgers and buzzards, was having a detrimental effect not just on game but also on so many other species of birds and mammals as well.

All wild birds need an abundance of both weed seeds and insects, neither are really compatible with modern farming techniques, and also being unable to keep some predators down to acceptable levels puts unprecedented pressure on many other wild animals and birds.

With the second drive completed we stopped for a mid-morning warmer of cherry brandy or sloe gin topped up with a bit of bubbly. This is always a welcome and looked-forward-to break in the proceedings on any shoot day. Completing two more drives, we returned to the farm for a short lunch of hot soup and Lincolnshire pork pie. Suitably fortified, we loaded up again in the shoot trailer and set off for the final three drives in the afternoon. By now the wind had picked up and a few heavy rain showers were coming in, making for some very testing shooting.

With the final drive completed, we finished the day on a total bag of seventy-one head, made up of fifty-seven pheasants, seven partridges, six hares and one pigeon.