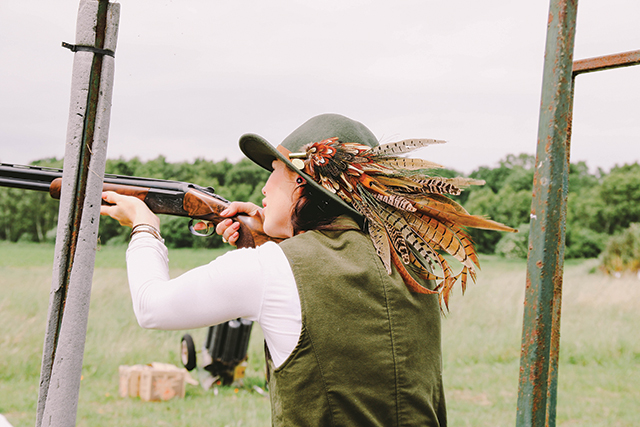 Shooting times – in the field with Diane Ablett

Growing up in the Lincolnshire countryside with a gamekeeper and farmer father, much of young Diane Ablett’s time was spent with a shotgun in hand. For her, shooting was simply a way of life…
“As a child it was commonplace for me. I’d help Dad as much as possible (usually under duress!) when he needed help with crop protection. I’d also be called upon during game season when Dad needed a back gun or someone to fill an empty peg,” explained Diane.

Although shooting played a big part in her earlier years, she sadly lost touch with the pursuit aged 13 when her father left the farming industry. Many years went by, during which motherhood and a busy career as a licensed animal technician took up most of her time. It wasn’t until her friend and work colleague invited her to a clay shooting hen party in August 2016 that she picked up a shotgun again.

She said: “I went along and felt excited to have a go, as it had been so long since I’d even held a gun. I do however recall squeezing the trigger on the first two barrels and opening the gun, the gun smoke hit my nostrils and that was it! I looked back at my friends and squealed ‘Why did I ever stop doing this?!’ I hit twenty-one out of fifty targets and immediately started looking into how I could take it up and what I needed to do.”

Diane found ladies shooting club Femmes Fatales online and decided to attend one of their events local to her. Through the club she has met lots of like-minded women who share her passion for the sport. “I shoot with many of the wonderful ladies I’ve met through Femmes Fatales – Chiara King, Wendy Spackman and Lisa Smith, to name but a few,” she said.

For Diane, clay shooting has provided more than just a bit of fun at weekends: “When I started going to Femmes Fatales events I was going through a marriage breakup and had a health scare going on, so I can honestly say that at that time it was pretty much one of very few positive things in my life and kept me smiling by giving me something to look forward to.

“The best thing about shooting? The people! I have met some of the most kind, generous hearted people, both men and women, through this sport. My lovely boyfriend Steve, plus Jess Boardman who is my shooting bestie – and we have been accused of being joined at the hip!”

The sport has taken Diane all over the county. “I live on the Lincolnshire/Cambridgeshire border so I am quite spoiled for choice in my area,” she said. “In Linconshire we have Pinewood Shooting Ground, Welland Valley Gun Club near Stamford who shoot every other Sunday, and East of England Shooting Ground in Spalding.”

She has also travelled further afield and shot at venues all over England, even braving a venture in to the world of competitive clay shooting. “I think the only time I’ve been nervous is when my friend Billy Cook decided to enter me into the Highwayman’s competition last year, it was my first big competition and the targets terrified me!”

Diane will also be competing in the renowned Essex Gun Masters, one of the UK’s major clay shooting championships.

However, Diane’s favourite ground is one local to her: Grimsthorpe Estate Shooting Ground in Bourne. She explained: “The ground is just stunning! Set in woodland with the most beautiful brand new club house!”

The beautiful venue is where she is set to host a Ladies Day on Saturday 21st July.

“I’m so happy to be arranging my first Femmes Fatales day. I’m excited to be involved at this level and I can only hope I make as good a job at being a hostess as all the other Ladies Days that I’ve attended.”

The event will cater for novices as well as experienced shots. All equipment will be provided along with professional tuition. Breakfast and lunch will be provided too, plus guests will even have the chance to win some fabulous prizes!

The sport of clay shooting has truly changed Diane’s life, taken her all over the country and introduced her to a whole network of good friends who share her love of the outdoors.

She is keen to encourage more women to come along, step outside their comfort zone and give clay shooting a try: “If you’re thinking about having a go, don’t hesitate or talk yourself out of it. It’s an amazing sport and you won’t regret it.”

You can find details of the event at: www.femmes-fatales.co.uk