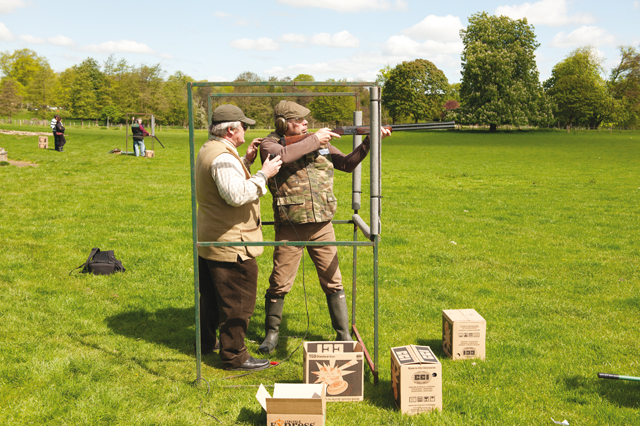 We are only days away from the greatest sports spectacular Britain has seen for decades. Hopefully the county’s shooting clubs and organisers will be geared up to take advantage of the boost in interest that is always generated by the Olympics and similar events. For most this is a real once-in-a-lifetime opportunity.
BRILLIANT COUNTRYSIDE DAY EVENT
The weather was great and the turn out was excellent for the recent Lincolnshire Countryside Day at the University of Lincoln’s Riseholme Campus, organised by Lincolnshire Active Community Network.

This special introductory event offered a range of activities including fly fishing, clay pigeon shooting, archery, ferret work and bird of prey handling. LACN managing director, David Carter said that it had been a very successful event and thanked all the experts who turned up to give advice and tuition, as well as all those involved with the general organising of the event.

“We have arranged events like this before and they just get better and better,” said David. “It shows the amount of interest in these traditional country pursuits and also the success of Lincolnshire Active Community Network in getting people out of the house to enjoy things of this sort. Most people want to have a go at something and events like this provide them with the chance.”

View some of the images of the day in the gallery and what you missed if you were not there. The good news is that there are more similar events to come.

IT COULD HAPPEN HERE
It only takes one authority to introduce new legislation and soon after they are all at it. With that in mind, the Scottish Government has confirmed that it will soon introduce a regulation scheme that will license new airguns purchased in Scotland.

The statement by justice secretary, Kenny MacAskill followed his meeting with the parents of Andrew Morton, the toddler who died after being shot by an air rifle in 2005.
Mr MacAskill said: “We have a long-standing commitment to address the misuse of air weapons and we will bring forward legislation to regulate their ownership and use at the earliest possible opportunity.

“We are working with the Scottish Firearms Consultative Committee to ensure that we take on board the legitimate use of air rifles by those who have to deal with pests and control vermin, and those who are members of legitimate, authorised sporting clubs.”

Possibly it’s a good idea but let’s face it, you cannot license for idiots.

OLYMPIC HOPEFULS TARGET MEDALS
At long last the wait is almost over and this month sees the Olympics back in Britain. There are five events in each of the three disciplines (rifle, pistol and shotgun) with three for men and two for women.

For those who are not sure, all the events are individual and require shooters to adopt different positions: standing, kneeling or prone, where they lie on their fronts. Rules vary according to the discipline, with distance, types of target, arm, firing position, number of shots (between twenty and sixty) and the time within which the shots have to be fired all relevant factors.

The rifle and pistol classes require shooters to fire bullets at a ten-ring target within a given time while the shotgun events – trap and skeet – sees them firing lead pellets at clay targets, released on or after shooters command.

The winner of the rifle and pistol events is the shooter with the highest score. During the qualification stages, the eight best shooters qualify and move to the final round where the ten rings of the target are subdivided into ten ‘decimal’ score zones (max 10.9). The final score is added to the qualification score to determine total scores and final rankings.

Shotgun shooters score points by hitting a ‘clay’, which is made not of clay but of pitch and chalk. A hit is declared by the referee when the target is shot and at least one visible piece is seen to fall from it. The shooter who hits the most targets wins.

SMALL-BORE GETS MORE POPULAR
The Lincolnshire Small-bore Rifle Association reports that interest in this element of the sport has increased. So as a reminder, here are three clubs you might like to contact if you fancy having a go.

Sleaford Rifle Club
The club is located in the centre of town and has at present four firing points at 25 yards for prone small-bore only. Equipment is available for beginners as well as tuition. There is a heated club room with a small kitchen for making tea and coffee as well as onsite toilet facilities. If you require information please contact the club at ssbrc@hotmail.co.uk or lsra@hotmail.co.uk

Boston Rifle Club
Here you will find excellent facilities, with a five firing point indoor range at 25 yards.
The club caters for all levels of shooters from beginners to competing in local, county and national events.

Lincoln Liberal Target Shooting Club
The club has five firing points with automatic target changers at 10 metres for air pistol/rifle; three firing points for 20 yards air pistol and two points for 15 yard .22 small-bore prone rifle.
The General Club night is Thursday, competition night on a Monday, 20 yards on Tuesday and .22 Small-bore rifle on Wednesday. The club can cater for all ages and has club rifles and pistols for newcomers to use.

THE PAWFECT TREAT FOR YOUR POOCH
With so much great food and produce around why shouldn’t our pets benefit too? Patchwork Pooch believes just this.

Kate Elizabeth was inspired by her two Labradors to come up with a wholesome tasty treat without all the additives found in most dog treats. All Patchwork Pooch’s treats are homemade from 100% human grade ingredients and natural flavours; they contain no additives or preservatives. Kate also uses local ingredients where she can.