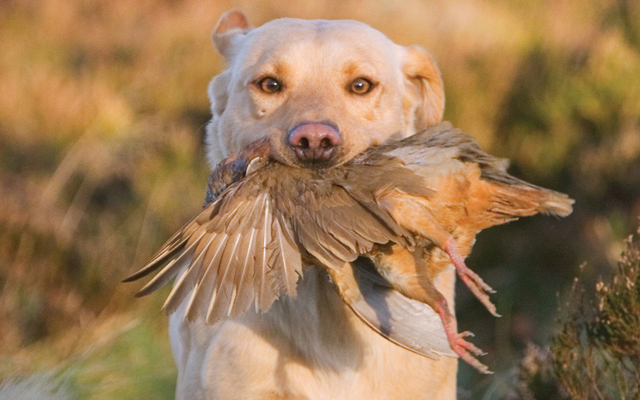 The Gunroom provides the best platform for all shooting pursuits – Send us your news on editorial@lincolnshirelife.co.uk
CLA GAME FAIR LAUNCHED CLA GUNDOG OF THE YEAR CONTEST
The new contest – held in association with Mitsubishi Motors in the UK – is aimed at the country’s leading gundog handlers and is open to all breeds of gundog.

The contest, which will take place daily over the three days of the CLA Game Fair, from Friday, 19th July to Sunday, 21st July, in the grounds of Ragley Hall in Warwickshire, will see the top gundogs in the country competing in a series of tests.

The winning handler will receive the Sir John Ruggles-Brise Trophy in memory of the former CLA president and founder of the CLA Game Fair and a special prize from Mitsubishi – the use of a superb L200 Warrior for one year.

“We would also like to encourage more gundog owners to visit the show. This competition will provide a chance to be inspired by seeing the top working partnerships in action.”

CLA Gundogs chairman, Sandra Onens said: “To find the top gundog in the UK, the contest will be open to the country’s leading handlers including those taking part in the Euro Challenge and Home International Competitions as well as the judges and the gundog demonstrators providing they are resident in the UK.

“This is an exciting development for the CLA Game Fair and for the gundog world because there is nothing else like it. We will be setting a challenging group of tests that will enable the very best of our working dogs to shine. The dog we are looking for will be capable of walking to heel, being steady and quiet when shots are fired and being at one with the handler. In short, we are looking for all the elements of a perfect gundog.”

Toby Marshall, sales and marketing at Mitsubishi Motors in the UK, said: “We are delighted to be involved with this new award and extend our support of the CLA Game Fair and, indeed, rural sports. We would like to wish the very best of luck to all gundog owners competing for this exciting accolade and prize vehicle.”

FROM WHERE I’M STANDING
As I write this I have to remind myself that we are almost halfway through the year already; what with such a late spring in terms of the weather it put many things back by a month, including much of our flora and fauna, the daffodils were late and in some parts bluebells are still only just appearing.

I’m sure there are those out there who will blame it all on global warming but, hey, this is England and the weather is known for being fickle; it’s done it before and will no doubt surprise us again when it feels like it. Of late, my shooting pal and I have been out and about trying to keep the pigeons off what remains of many fields of winter rape; the wet weather and the slugs ruined hundreds if not thousands of acres of it and much of it has had to be re-drilled.

In years past I would always hope to have the odd field of spring rape at my disposal, as it would nearly always prove a big draw to the pigeons, as they love the lush fresh growth that it provides throughout May and June. Currently, however, I have fifty fields to keep an eye on, so the pigeons will be spoiled for choice and I will probably spend more time driving around checking fields than actually shooting.

Talking to a farmer the other day I commented that I had seen a lot of pigeons dropping into some winter wheat next to a rape field that had been badly attacked all winter. On closer inspection it appeared that they were feeding on chickweed. He thought that was okay, as it meant they were leaving the rape alone and that we should not shoot them. I gently reminded him that if not shot they would probably be back on the rape tomorrow and that we should have a go at them now. He agreed and we were able to take a modest bag, while at the same time making a small reduction in the local pigeon population. Lincolnshire is predominantly an agricultural county and the pigeon is now officially our most common bird. Though it is a joy to watch in our gardens or at the bird table it also munches its way through millions of pounds worth of crops every year, making an impact on the farming economy and ultimately the prices we pay in the shops for our fruit and vegetables. Having duly explained all this, the pigeon is of course a wonderfully sporting bird, totally organic and truly free range – it makes great eating and that’s another reason why I love it.

The RSPB has been in the news recently, as the head of its investigations team Bob Elliot decided to accept an invitation to make a keynote speech at a symposium given by the League Against Cruel Sports – this is despite the RSPB charter stating that the organisation is neutral on game shooting. I question the judgement of such a highly respected body getting into bed with a fringe group whose members have in the past openly resorted to violence and intimidation to get their point across.

June is probably the month when we realise that summer has actually arrived; the days are long and the countryside is looking its best; it’s the month when the last of our migrant birds arrive.
By now the swallows, swifts and house martins will be well established and I love to watch them on summer evenings as they race about catching insects. But for me nothing sets the scene on a summer’s evening as the soft purring call of the turtle dove. In my youth it was not uncommon to find the flimsy flat platform of twigs that served as a nest often containing the two oval white eggs that this small dove lays, but in recent years fewer numbers are returning, thus denying us one of the sounds of summer. Another visitor is the spotted flycatcher that arrives in May and will frequently nest in our gardens. A pair often nested on a ledge of a wall near our garden gate but sadly I have not seen one in recent years. Studies have shown that breeding success is hampered by nest predators, with the jay and magpie being the most common culprits.

Last but not least, June is the month when we can look forward to our county show at North Carlton, near Lincoln, giving us a chance to meet up with friends, be entertained and probably be persuaded to part with some money for some of the many wonderful goods on offer. Lincolnshire Life will be there and I plan to visit the stand, so pop in for a chat, I look forward to meeting you.

It didn’t seem a year since our last charity working test at Raithby, by kind permission of Robert and Alistair Hall-Jones, Martin Reeve and the Mavis Enderby Shoot. Just like last year, the weather forecast had not been promising, but the rain held off until the tests had been completed and everyone had enjoyed the hog roast – then the heavens opened. We would like to thank our hosts and Mr and Mrs P Gibson, Chandlers of Horncastle, Thomas Bell & Sons of Brigg and Crawfords Shooting Supplies for sponsoring the prizes.

Our judges for the day were Sue Lowe, Gilly Bell, Doreen Spencer, Gill Stewart and Casper Jonsen. Will Hales made his debut as chief steward.

There were five tests:
Test 1 was a mark on plough and a blind on the reservoir bank. Novice dogs picked the mark first and open dogs the blind.
Test 2 was a two-dog walk-up with straight marks followed by crossing marks. The distances for the open dogs were greater than for the novices.
Test 3 was a mark in rough grass alongside a wood, followed by a blind put out in the same place. Again open dogs covered a greater distance than novice dogs.
Test 4 was a mark over a hedge followed by a blind in a wood beyond grassland and a dyke.
Test 5 was a picking-up exercise where the dogs had to pick two of the three blinds out.

After the serious part of the day, competitors, friends and families enjoyed the hog roast and yummy puddings before Will Hales turned auctioneer to sell more than forty lots including a dog bed, a thumb stick, bags of potatoes, bags of dog food, photo shoots and chocolates – all donated by members along with thirty or more raffle prizes. A huge thank you must go to everyone who contributed by donating raffle prizes, money and auction lots, as well as buying raffle tickets and auction lots. Thanks also to the helpers who gave their time to make this such an enjoyable day. As everyone was so generous, together we raised over £750 for the Lincolnshire and Nottinghamshire Air Ambulance. Thank you!