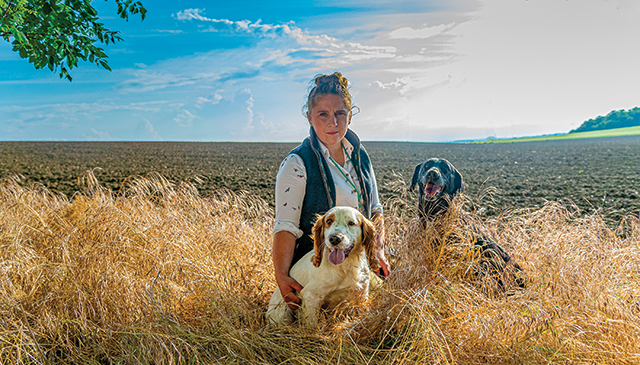 Staying ahead of the game

Matt Limb OBE meets one of the growing number of women gamekeepers, who are helping to shape the future of the British countryside.
I can remember the weekend as clear as if it were yesterday. A weekend in Scotland meeting up with an old friend, supper on Friday, then a day’s shooting on Saturday. Despite the long drive north of the border, I enjoyed my evening, but all too soon morning arrived, and we were heading off to meet our fellow Guns for the day’s driven pheasant shooting.

It was a cool and fresh morning as we assembled at the keeper’s cottage, then it happened: I was introduced to the gamekeeper. Her name was Hazel. The first working lady gamekeeper I had met; but she would not be the last. During the day I could not help but appreciate the control she had over the day working with the Shoot Captain and holding the beaters line steady. I drove home that evening with a grin on my face, first for the enjoyment of a fine day out, but also for meeting my first working lady gamekeeper.

I have known many gamekeepers over my years, the majority following their father in a family tradition of gamekeeping, often running into three and four generations, with the skills and tricks of the trade being passed from father to son. But I cannot remember such talents being passed to a daughter. So is this a modern phenomenon, having lady gamekeepers, or is it more akin to the changing role in modern gamekeeping and its requirements and skills?

As a career, gamekeeping does not sit alongside banking or a city job in terms of financial reward or company benefits, perks and expense accounts, but I can’t think of a more satisfying career, provided you have the craving and desire to work in the British countryside. Having spoken with gamekeepers many times, I know it is as much of a passion as an occupation. It is a love of the British countryside, it is not a nine-to-five routine, you are out every day in all weather conditions and often working on your own; but if this is the right mix for you it could bring you a rewarding and enjoyable way of life.

Kirstan, from Lincolnshire, is about to start on a career as a working gamekeeper. Unlike many, Kirstan has not followed her father, although he has worked on a farm for most of his life. An upbringing in a small village has been an influence for her career choice, plus Kirstan has been taught a healthy respect for the countryside and its rural lifestyle, by her parents. By the time she was six, she was out beating on local shoots, with the money she earned she bought her first dog, a young terrier, which was soon followed by her first Labrador in the beating line.

In fact, a whole menagerie of animals has played a significant part in Kirstan’s life over the years. This has included ferrets, which she works with purse nets and even a Harris Hawk called Bramble, which she admitted was hard work – we can add to this her pony and numerous working gundogs. Shooting has also been an interest, starting with an air-rifle, then a twenty bore and now a twelve bore. Over the years Kirstan could be found rough-shooting and duck shooting, in addition to clay shooting.

Before leaving school, she spent her work experience alongside a local Lincolnshire gamekeeper, admitting her disappointment when she stopped helping him with vermin and pest control, due to being on placement from school. Throughout this time Kirstan had the total support of her parents, her mother commenting that she has worked hard at school, as well as helping on local farms to earn additional pocket money.

Despite the support of her family, Kirstan did not always feel she had the full support of all her teachers, especially in her later years at school. While in detention – it was Kirstan that admitted it was detention – she was asked by her teacher what she wanted to do on leaving school: with no hesitation the reply was gamekeeping. Her teacher looked surprised, saying she did not agree with gamekeeping, and that it was not a job for a woman – adding she could do much better if only she applied herself harder to her studies. The reply from Kirstan was polite but swift and to the point, stating that modern gamekeeping is about conservation and helping to preserve the balance in the countryside.

It is clear that for Kirstan a lifelong passion for the countryside with dogs, a pony, hawks plus ferrets and hatching partridge and pheasant eggs at home, a career in a rural setting was inevitable; so why not become one of the growing numbers of lady gamekeepers?

Today, the popular entry route to a career in gamekeeping is a two-year training or apprenticeship course. This brings a mix of formal college training with placements working alongside an experienced gamekeeper. Colleges are seeing a steady demand for places on gamekeeping courses, which is going hand-in-hand with developing a possible apprenticeship for newly qualified underkeepers. I mentioned this to a lifelong gamekeeper of some 45 years, who in turn comes from a family that has been dedicated to the profession. He openly admits that it is vastly different from when he started as a young underkeeper, adding that the legislation today is something that must be taught in a formal setting and it is far better that they arrive from college with such knowledge and skills. Then in the early years of their career, they can develop the experience and depth of learning, but the college must give the qualifications to start their career as a gamekeeper.

When you look at the skills required to successfully work as a gamekeeper today the list is endless; from chainsaw skills to the use of poisons and weed-sprays, then there are strimmers and the necessary protective clothing, plus the legal requirement of pest and vermin control and of course the law surrounding firearms, ammunition and the safe handling of them. Without such basic qualifications and skills, it makes the junior underkeeper unemployable.

Kirstan has now finished her training, with the course’s popularity showing amongst the girls as they made up almost 20 per cent of the students. But she would not be lonely during her time away from Lincolnshire as Kirstan had Snoopy, her young Cocker Spaniel, and Tally her black Labrador living in their kennels in the grounds of the college, both having been her companions over the years, following her around college and then on to many an estate for work experience.

During the course, Kirstan gained many of the required qualifications in addition to her deer stalking certificate plus experience across several estates in the north of the country, including working on remote grouse moors on shoot days, along with practical experience of deer stalking. She also returned to Lincolnshire to work on local estates, to help during the rearing and shooting seasons. When I asked her about the wider college experience, she said she felt the course has given her the basic tools and skills of her chosen career, but above all the confidence in using them. Kirstan added that she feels confident that the role of today’s modern gamekeeper is equally open to girls, as it is to any young man.

One memorable highlight during her days at college was taking her Labrador Tally to the Crufts Dog Show and winning the Young Gamekeepers Class. She then went on to take reserve best in show for the Gamekeepers Class. Now looking to the future Kirstan is focused on a junior underkeeper’s appointment, ideally this would be working with pheasant and partridge in the north of England and preferably where she could also be involved in the estate’s deer stalking.

So, what did I learn as I sat and chatted with Kirstan as a newly qualified young gamekeeper? First and foremost, she came over as highly positive, hardworking and ambitious; this was highlighted when I asked if she had any hobbies, to which she replied, my work and my dogs are my hobbies. She has a love for the countryside, its preservation and conservation plus a rural way of life. Kirstan is not going into this with her eyes half-open, as she has that wider experience growing up in a rural environment and helping local gamekeepers from a young age, before making what has been a life-defining decision regarding her future career.

I feel sure you will join me in wishing Kirstan the very best of luck over the coming days in gaining full-time employment as one of the country’s growing numbers of lady gamekeepers. For me, her story would be complete if in a few seasons’ time I were to arrive at a keeper’s cottage with my fellow Guns to be greeted by Kirstan dressed in the estate’s shooting tweeds, with her dogs running around and, in the finest of traditions, we shared a brew of tea and bacon sandwiches on a shoot morning.