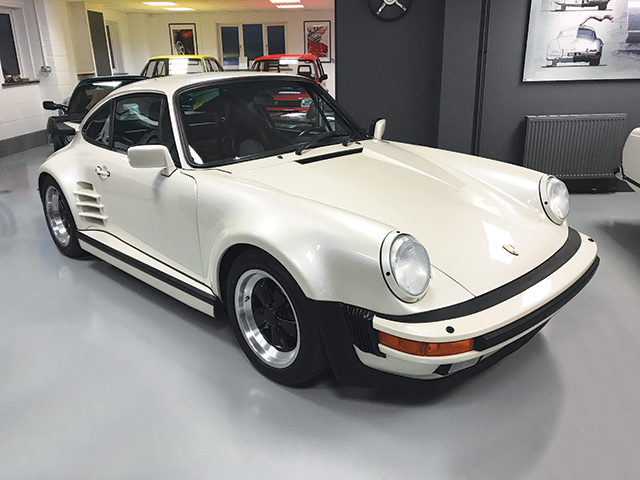 If you are looking for an iconic car of the late twentieth century then look no further than Woldside Classic and Sports Car in Louth where they have in stock a 1987 Porsche 911 930 Turbo 3.3 Coupe – the ultimate symbol of overindulgence in the hedonistic boom time of the 1980s.
The 930, commonly known as the 911 Turbo, was first manufactured in 1975 and when introduced, was the fastest production car in Germany. Originally powered by a flat 6 cylinder 3.0ltr engine providing 256HP to the rear wheels through a four speed manual gearbox. You may wonder why only a four speed box but the engineers assumed that with so much torque on tap once the turbocharger was spinning, drivers wouldn’t need any more! In order to ensure that the platform could make the most of the higher power output, a revised suspension, larger brakes and a stronger gearbox became part of the model specification. The characteristic ‘whale tail’ rear spoiler helped to vent more air to the engine and create downforce at the rear of the vehicle. Wider rear wheels with upgraded tyres combined with flared wheel arches were added to increase the 911’s width and grip, making it more stable. Even so, this car takes some driving and in the day was nicknamed ‘The Widowmaker’!

The most significant improvement to the 911 was in 1978 when the engine capacity was raised to 3.3ltr with the addition of an intercooler and improved brakes, power was increased to 300HP and top speed was 173mph with a 0–60 sprint of just 4.6 seconds.

The Porsche 911 930 at Woldside Classics is a left hand drive car, imported from the USA. There is no corrosion and no sign of previous repairs. The car comes with a Porsche Certificate of Authenticity which states it was manufactured in April 1987 in special order colour to sample 947 ‘Pearlglanzeffekt’ Pearl White Lustre with black partial leather seats specially trimmed to Porsche 959 design. Other options included a Limited Slip Differential, Sports Seats with electric height adjustment left and right, Electric Sliding Sunroof, a Blaupunkt radio and alarm. The car is also furnished with the rear quarter side cooling vents and sill extensions as per the SE model. It has covered 97,388 miles and has had some light recommissioning since it arrived at Woldside Classics.

This matching numbers example is really a striking looking car from all angles and is of the highest quality. The factory applied VIN stickers all remain in place, being properly affixed to the Porsche’s rear engine cover, front boot, and both doors. Sitting on perfect 16″ Fuch alloy wheels with recent Toyo tyres the car is simply stunning – the seats and interior show only the very slightest patina and are all original. Open the engine compartment and you will see a larger than normal intercooler and twin exit sports exhaust pipes to further enhance an already very powerful car.

The 930 was officially replaced by the Type 964 in 1990, however it will always have the honour of being the model that began Porsche’s Turbocharged legacy as each subsequent generation of the Model 911 from the Type 930 forward includes a turbocharged edition. This makes the 911 930 Turbo highly collectible and a sound investment. 

You can view the car at www.woldsideclassics.co.uk where there is a video presentation and photographs or visit their heated showroom on Tattershall way, Fairfield Industrial Estate in Louth. For more information call 01507 606725.