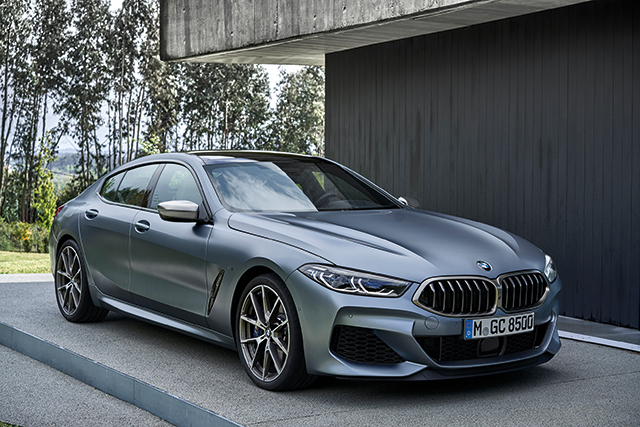 The new BMW 8 Series Gran Coupé is the only model in its segment derived directly from a two-door sports car. It is a consequence of development alongside the new BMW 8 Series Coupé and M8 GTE racing car, which competes in the FIA World Endurance Championship (WEC) and the IMSA WeatherTech SportsCar Championship (IWSC) in North America. The world premiere of the BMW 8 Series Gran Coupé was the highlight of the inaugural BMW Group #NEXTGen event in Munich on 25th June and the UK launch of the new car will commence in September 2019.

The Gran Coupé’s front section is identical to the 8 Series Coupé’s design up to the start of the A-pillars. Because the windscreen frame is slightly more upright, the roofline rises to a greater height by the time it reaches the front seats, meaning additional front and rear headroom. The rear window follows a slightly steeper line in order to produce a larger boot aperture and the surface contouring around the C-pillars has been facilitated by a rear window that forms a fixed part of the body structure and a conventional boot lid. These two design features also have a positive impact on the body’s torsional rigidity and acoustic comfort in the car’s interior. Integrating the antenna technology into the rear window and boot lid has dispensed with the need for a roof fin.

LEATHER TRIM AS STANDARD, 40:20:40 SPLIT/FOLDING REAR BACKREST
The front sports seats feature head restraints integrated into the backrests, electric seat adjustment and even a standard memory function for both driver and front passenger. The standard-specification Vernasca leather trim is available in Black, Cognac and Ivory White. The list of optional extras includes BMW Individual Merino leather trim with extended appointments and BMW Individual Merino full leather trim. Both come in a choice of Black, Cognac and Ivory White as well as a variety of particularly striking two-tone colour schemes, including the new combinations Midnight Blue/Ivory White and Tartufo/Ivory White