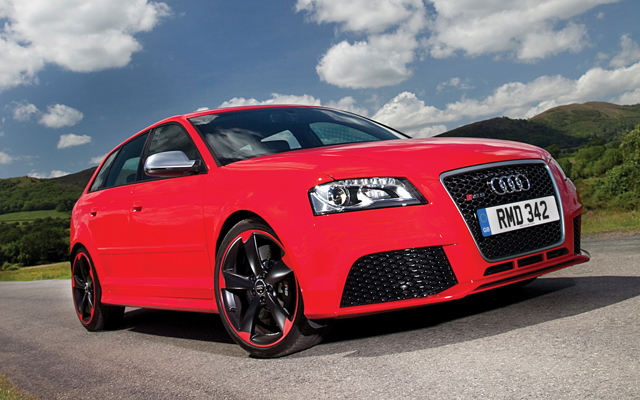 Potent Audi For Discerning Introverts
Rain chucking down like the proverbial stair rods, thunder and lightening in all directions, an Austrian mountain pass running like a river and the skies getting ever darker! Not really ideal motoring conditions… unless the car is the new and exclusive Audi RS3.

For the launch of this highly potent derivative of what is considered to be a relatively junior model in Audi’s burgeoning car range, Audi took the motoring press back to the western part of the Gurktaler Alps. This is where the first Audi Quattro was presented to the Board of Management early in 1978. The ‘suits’ gave the green light and motoring history was well and truly made.

This alternative to a baptism of fire for a new model could not have been better orchestrated. Test conditions clearly proved the lizard-like handling qualities of this car. It sports a 5-cylinder turbocharged 340 PS/335 bhp petrol fuelled engine under its bonnet and delivers the power through all four wheels via an almost spontaneous shifting 7-speed DSG double clutch selectable automatic transmission.

Such power in a car little larger than a family hatchback, under these conditions, should at least be a real white-knuckle experience for even a seriously competent driver. Not so! This newcomer to the super league proved utterly responsive to all commands with never an instance of drama, and with no exacting demands on the driver. Sheer enjoyment would best describe the whole experience.

What Audi has achieved with this version of the Audi A3, is an uncompromisingly high performance car that is so civilised, it is as much at home around town as it is roaming the mountain ranges. And in achieving this end, the actual car closely resembles the regular A3 versions. Thus has been created just the vehicle for those who don’t want to broadcast what they have got. It’s an ideal car for the discerning introvert who favours what they used to call this type of vehicle – a Q car.

Close scrutiny will reveal that the suspension is lower. The distinctive painted alloy wheels are offset to give a wider footprint on the road, and there are twin side-by-side exhaust pipes! Frontal appearance is distinguished by bright trim around the twin side intakes, and there is just the suggestion of a rear spoiler. And the RS3 insignia front and rear, is hardly blatant.

Inside the story is the same. The interior is almost subdued, though clearly representing the functionality required for high performance of the car plus the importance of an excellent workstation for the driver. The standard front seats are brilliant in the way they support in all the right places. The optional extra seats tried in the first of two examples experienced on the launch, were even better, though they do cost £2,045 extra for the pair! You get leather, of course, whatever seats are specified.

I suggest the accommodation is best for four adults, as is with the standard A3. In that way the proportions of leg and head space for all passengers are more than acceptable, together with a reasonable degree of luggage capacity.

The gear lever looks like a conventional one, but in actual fact it can either be left in automatic mode, or slicked to the left and used as a ‘tip select’ device for faster up and down changes (0.02 of a second between cogs). Alternatively the driver can use the paddle shifts behind the steering wheel and enjoy the life of a serious competition driver. There is also a Sports mode that can be employed to optimise power by extending the engine speeds between gear shifts.

In producing a car that has a top speed of 155 mph and is claimed to hit 62 mph from rest in a mere 4.6 seconds, Audi has created a vehicle with amazing driving character. In town, it is as docile and flexible as they come. Up in ‘them there mountains’ however, it can really get fired up. It provides for seriously fast passage on very seriously demanding terrain. Road grip is phenomenal. The fine tuning is accentuated by a braking system that also works in conjunction with an energy recovery system, as soon as the throttle is lifted.

The ride quality for what is a super league performer has to be experienced to be believed and while there is little in the way of suspension travel, the ride is still smooth. And even when it was my turn to navigate, I enjoyed the experience and marvelled how Audi has actually managed to cushion the ride to such a good degree. After all, on this type of route at such speed and doing this task, I should normally expect to be travel sick

If you can afford the price tag of just under £39,000 before delving into the options menu to create your individual car, then a fuel consumption that can get down to 21.6 mpg or rise to 31 mpg on the combined cycle, and road tax of £550, should all appear realistic – certainly if considered on a cost and performance basis.

The Audi RS3 Sportback does look very much like the original A3, but believe you me, under the skin, there has been a heck of a lot of re-engineering to save weight and create such a refined, balanced and driver friendly vehicle. No wonder the first batch of 500 examples earmarked for the UK have been snapped up! Start forming a queue for the next consignment!