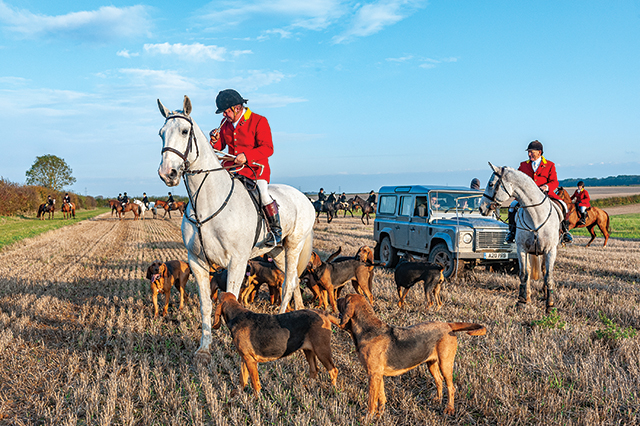 ‘Hunting with bloodhounds is one of the best-kept secrets in the British countryside…’
As the days shorten, clocks change and the autumn equinox passes you can feel a great expectancy in the air. Then overnight a new season of hunting starts.

Before the start of any new season the Masters, Huntsmen and their staff have worked hard getting the hounds fit and bringing the new puppies into the pack – and nowhere is this more visible than here in Lincolnshire.

The Cranwell Bloodhounds were formed in 1992 by Joint Masters, the late Mr Philip Broughton MH and Mrs Wendy Broughton MH, with the original aim, which has not changed, to provide a day in the countryside that everyone could attend and enjoy.

It came as a bitter blow for the hunt, its staff and the many loyal followers when Philip suddenly and unexpectedly passed away whilst out hunting early last season. But the legacy he started and embraced, of hunting with bloodhounds continues. At the opening meet this season, the Cranwell Bloodhounds were under the watchful eye of his wife, Wendy.

The Bloodhounds hunt the ‘clean boot’ – that is, the natural scent of man – in this case, a cross country runner. The quarry is given a 20-minute head start prior to each hunt, which is referred to as a line. No trail is put down, no artificial scent used, just the natural smell of the cross-country runner.

A private pack, the Cranwell Bloodhounds, enjoy about twenty days’ hunting each season, normally meeting around midday on a Sunday. After the first two lines they enjoy the hospitality of the Hunt’s Masters, before continuing, with a late afternoon finish. The opening meet of this season attracted over 40 on horseback and a similar number of car followers, confirming the Cranwell Bloodhounds as the popular, warm and welcoming hunt for which it has become known.