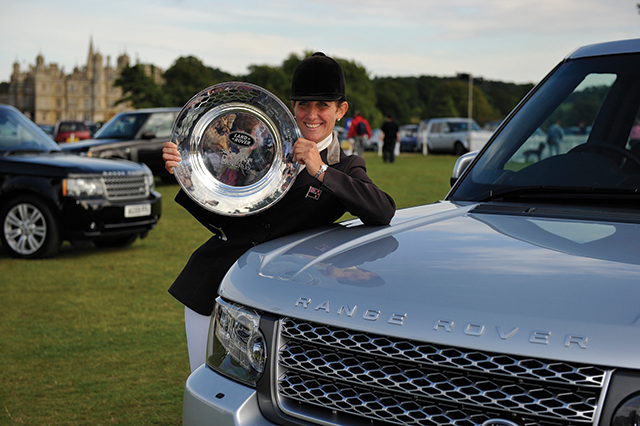 ‘Fortune favours the brave’ and there are few braver than Lenamore, winner of this year’s Land Rover Burghley Horse Trials. The little grey with a big personality threw his heart over every fence to record an emphatic and popular victory for his British-based New Zealand rider Caroline Powell.
At seventeen-years-old Lenamore is believed to be the oldest horse on the esteemed Burghley roll of honour while Caroline, who is married to Scotsman Robert Powell and based near Kelso, is the first female winner to represent her native New Zealand as well as the first from over the border for thirty-two years. Lenamore and Caroline have been together since working owner Lexi Mackinnon handed over the reins six years ago. The pair has become celebrated for their dashing style cross-country while Lenamore is well-known for his quirky ‘shall-I-shan’t I’ nature. At home he won’t be hacked out on his own, he has his favourite events – clearly Burghley is one – and at a competition has to go straight to the dressage arena from his stable bypassing the working-in zone. “But we adore him. He is a real ball of fun and he just puts a smile on your face whether he is being naughty or not,” said newly married Lexi for who the win was the best wedding present ever.

Competing at Burghley is however not just about winning and the large crowd that wend their way to the famous Lincolnshire Park to witness some of the world’s best horses and riders tackle the challenging cross-country course provide just as big a cheer for the last as the first. The local combination of Kate Walls and Alter Ego might have been at the other end of the leader board but the fact that they competed, let alone complete their first Burghley was nothing short of a miracle after a fall last year left Alter Ego with a broken vertebrae. The combination was one of eighteen that were thrilled to gain their first completion of the world-famous event realising dreams and long held ambitions.

First timers also won prizes in the best trade stand competition. Bespoke tailors Green and Clarke from Yorkshire and Stamford-based illustrator Sophie Allport were judged best large and small trade stand respectively from over 500 trade stands that make up the shopping experience for which Burghley has become renowned. This year the choice and quality of the carefully selected stands was judged to be the best ever. With such an enthusiastic and discerning crowd of shoppers it is not surprising that there is a waiting list for retailers aspiring to be included at Burghley.

The weather also added to the feel-good factor of this year’s event – the inimitable back drop of Burghley House looks even more beautiful in autumn sunshine – allowing Sunday’s flypast by the Battle of Britain Memorial Flight to take place and it was all eyes skyward as the throb of the spitfires from RAF Coningsby came in earshot while on the ground The Band of the Bugles and Rifles provided a rousing welcome.

Next year the welcome will be even bigger as Miranda Rock, President of The Land Rover Burghley Horse Trials and the present custodian of the eminent Elizabethan house and estate, along with thousands of spectators, many of the best riders and horses from all over the world, will be celebrating the fiftieth anniversary of the horse trials. The Trials have run continuously since 1961 when the Marquess of Exeter inaugurated the event. One thing is for certain next year’s Land Rover Burghley Horse Trials 1st-4th September 2011 is definitely one not to be missed. For more information about the Trials in 2011 visit the website www.burghley-horse.co.uk