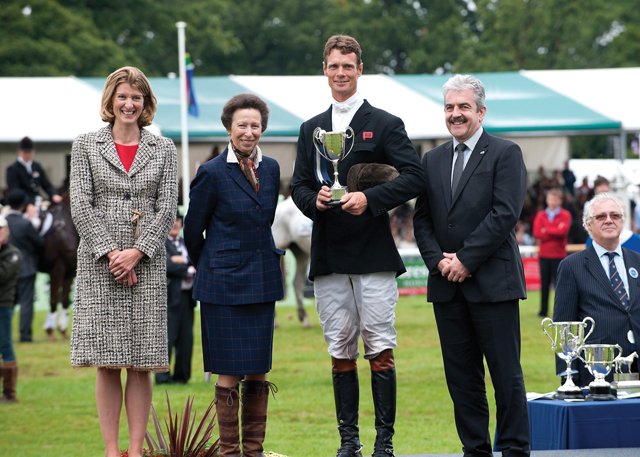 Day one of the Trials welcomed over 30,000 visitors through the gates, a record crowd for the first day of the dressage – and a significant start to 4 days of trading for over 600 trade stands.
Tom McEwan the youngest rider at twenty years of age was the story of the day: his first ever Burghley and first ever four-star event with thirty-four years between him and Mark Todd, the oldest competitor and five-times Burghley winner. Tom and his horse, Dry Old Party, was up against a strong field of eighty competitors, all with the Land Rover Perpetual Trophy in their sight.

However, halfway through the day William Fox-Pitt and Parklane Hawk went into the lead. They were the only pair whose score managed to break into the thirties – just – scoring 39.7, despite William being penalised for an error of course as he made his final halt at the wrong marker. “Getting into the thirties has a good psychological effect and I am delighted with him; I just hope that mistake doesn’t prove expensive,” said William. “Parklane Hawk coped really well; he has a superb brain on him, a lovely temperament, a good trot and is easy to ride – all those things you dream of in a horse and I have a lot of faith in him.” Parklane Hawk, who is owned by Catherine Witt, was the winner of Blenheim last year. He is a twelve-year-old, New Zealand-bred Thoroughbred, by Grosvenor who is also the sire of Santos, the ride of New Zealander Blyth Tait.

Friday was another day of glorious sunshine and strong competition. William stayed in first place through Friday, closely followed by Andrew Nicholson on Rosemary Barlow’s Avebury and Mary King in third place on Apache Sauce. Mary, badly bruised from her fall at the Europeans, had been given the all clear to compete at the Land Rover Burghley Horse Trials.

The light aircraft crash close to the A1 caused traffic problems around Stamford during the afternoon and the trade stands, members marquee and all refreshment outlets remained open until alternative routes were in place for visitors to leave the estate.

The alternative routes to the Land Rover Burghley Horse Trials were still in place for Saturday, the biggest day of all when droves of people from across the country began to arrive from seven in the morning in anticipation of the cross-country action. Record high fences, a bold and challenging course designed by Captain Mark Phillips proved a worthy design for the 50th Anniversary. The one to benefit most from the course was New Zealander Craig Nicolai, whose fast clear with Just Ironic moved him up forty-five places, from 77th to 32nd, while local rider Angus Smales from Rutland jumped thirty-nine places up the leader board with Ballyvooney.

Fifty-three of the fifty-eight finishers jumped clear rounds – a result that pleased course designer Captain Mark Phillips. “I was relieved to see fifty-three clear rounds but I think the reason that few finished with penalties is that if you had a stop early on then this course drained the confidence out of the rider. But in general riders respected the course and it rode well.”

Burghley Director Elizabeth Inman was happy with the outcome of the day. “I came in this morning worried by potential traffic problems (caused by the closure of the A1) but in fact, as well as an increase of advance sales of thirty per cent, the figures on the gate also went up by four per cent and I couldn’t be more pleased.”

As the last rider came over the final fence on Saturday, a mere 3.7 penalties, less than the value of one showjump down, divided the top four after the cross-country at the Land Rover Burghley Horse Trials.

The scene had been set for an exciting final day at the Trials – Sunday brought periodic rain and the final horse inspection took place in the main arena. Showjumping began in the morning with the top twenty-four horses jumping in the afternoon – HRH The Princess Royal was in attendance and witnessed a dream clear round over the coloured poles as William Fox-Pitt claimed his sixth Burghley victory – the first ever rider to attain this achievement, Fox-Pitt has entered the record books for the Land Rover Burghley Horse Trials. “I can’t believe it,” said William who first won here in 1994. “He was superb. I might have looked cool but deep down this mattered a lot – it is huge and a real honour”.

Incessant and heavy rain completely changed the ground conditions and within the few hours between the morning and afternoon’s showjumping the going went from good to sticky. William said: “The conditions were against him and going into the arena I was feeling quite sick – Neuf Des Coeurs had three down and I had to go in there saying ‘believe in him’ but realistically thinking what were the chances of a clear round? I am so lucky to have him.” It was an impressive four-star debut for the Thoroughbred who was procured just eighteen months ago. “He is still green but is one of my big hopes for next year.”

A clear round from Andrew Nicholson and Nereo had put the pressure on the four top-placed riders. Mary King and her homebred mare, Kings Temptress, owned by Derek Baden, had one down while Andrew on second-placed Avebury took out three poles to drop down the order to a final eighth place, while last year’s winner Caroline Powell (NZL) and Lenamore had two poles down which placed them a final fourth.

Zara Phillips, riding High Kingdom, had a successful three days being placed tenth overall, Tom McEwan finished with a respectful nineteenth place and won the prize for the highest placed British first-timer as well as the HSBC Training Bursary for what was an impressive Burghley and four-star debut by the youngest rider on the start list.

Leicestershire based Clea Phillips had another good Burghley result with Lead The Way who finished in sixth place again, making them the third best British combination in a truly international competition. Lauren Shannon (24) also from Leicestershire was one of the afternoon’s five clear showjumping rounds which propelled them eleven places up the leader board after cross-country to a final ninth place and the prize for the best Under-25.