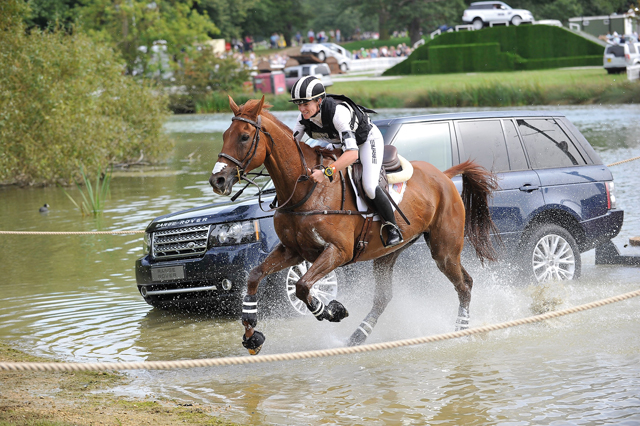 British based New Zealander, Andrew Nicholson was the popular winner of this year’s Land Rover Burghley Horse Trials.
It was the third Burghley title for the fifty-one-year-old, a winner of Olympic team bronze and the current world number one. Nicholson, one of the sport’s most experienced riders, last won twelve years ago and this time it was the twelve-year-old Avebury owned by his loyal and long-standing owner, Rosemary Barlow that put him back on top.

“Burghley is my all-time favourite event,” said an elated Nicholson. “Avebury has been on good form all year and I came here expecting to go well, so I am not surprised to win but I am highly delighted.”

There was all to play for going into the final day’s show jumping which never fails to produce an exciting climax to this competition. This year was no different and after the cross country any of the top four – Oliver Townend (Armada), William Fox-Pitt (Parklane Hawk), Andrew Nicholson (Avebury) and Sinead Halpin (Manoir de Carneville) from the US – were in with a shout.

One show jump down too many robbed Halpin and Manoir de Carneville of the Land Rover Perpetual Challenge trophy and the £55,000 first prize. Halpin and her twelve-year-old, last year’s US National Champions, led from the outset producing a high-scoring dressage test and a foot-perfect cross country round. The pair produced a masterclass in cross country, riding around Captain Mark Phillips’s beautifully presented thirty-three-fence course and was one of only four combinations inside the time. The lead gave the sunny American two show jumps in-hand but Richard Jeffery’s influential course produced only four clear rounds from the fifty-three who completed. Halpin used her advantage but the dream ending disappeared, with a third rolled pole one fence from home promoting Nicholson to first. Second place however was some compensation for missing out on Olympic selection.

“Three down was a bit disappointing but I am really proud of him and we have had an amazing week – we will be back, again, again and again,” said Halpin who was returning to the US immediately after the event.

Two show jumps down for Fox-Pitt and his 2011 winner Parklane Hawk left them off the pace for a consecutive win but the pair still took third place, good enough to secure the British Olympic team silver medallist the $150,000 (£95,000) first prize in the HSBC Classics™, awarded to the most successful rider at four-star level over the year. It was the third Classics win for Fox-Pitt, who ended up with a one-point advantage over Nicholson.

“I came to Burghley knowing the pressure was on and that Andrew was on fantastic form and winning by one point is a bit close, but thank heavens for Parklane Hawk who has been fantastic,” said Fox-Pitt. Oliver Townend was a close fourth, just 0.1 of a penalty behind Fox-Pitt, with Armada a former four-star ride of Nicholson.

New Zealand’s Olympic team bronze medallist, Jock Paget who made an impressive Burghley debut last year repeated his performance to finish in fifth place again with Clifton Lush despite a heart-stopping moment in the Trout Hatchery when it looked like he was going out the side door. American Allison Springer and Arthur IV, who also missed Olympic selection, were sixth. Eventing legend, Mark Todd put in one of the most impressive performances over the weekend moving fifty-two places up the leader board from 64th after a disappointing dressage, to a final 12th place.

Sadly the hopes of completion ended for Lincolnshire’s Burghley ‘first-timer’ Emily Parker when her ride Treefers took a dislike to the Land Rover Discovery Valley (fence seven). He was in good company: the influential fence was the downfall of several, including Olympic team silver medallist Mary King, who called it a day here after her mare Kings Temptress had a run out.

Following a frustrating season due to the number of rain-stricken cancelled events it was perhaps not surprising that Burghley enjoyed record numbers of spectators – the shopping village stayed open late on Saturday to allow a staggered departure of the thousands of vehicles. That also meant that visitors were able to enjoy the fantastic atmosphere and beautiful setting of Burghley Park for a few hours more. The next Land Rover Burghley Horse Trials takes place from 5 – 8 September 2013. For further information about the Trials and full details of the results this year please visit www.burghley-horse.co.uk