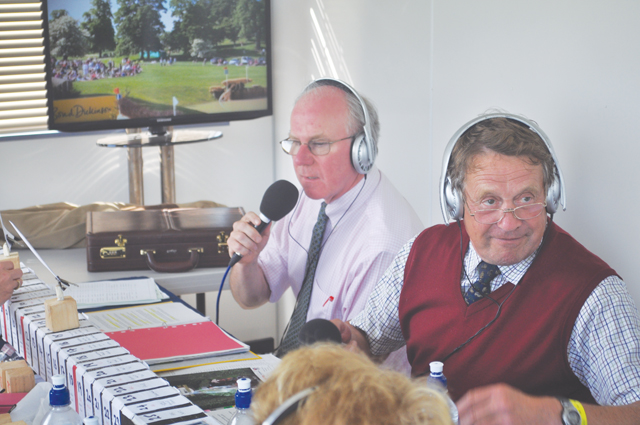 One of the vital components of any large sporting event is an informed commentary that enables spectators to keep up with the action. Lincolnshire based Richard Taylor is one of the crew of commentators, heard but never seen, at The Land Rover Burghley Horse Trials (5th – 8th September).
Taylor, from the small village of Humby, whose day job is management consultancy, joined the team behind the microphone at Land Rover Burghley after several years‘ ‘apprenticeship’ at other horse trials – although he had an unexpected introduction to the job.

“I was supporting one of my daughters at the Pony Club and in my absence it had been decided that, as the commentator had failed to appear, I was doing it instead. On the basis that some commentary is better than silence, I agreed to have a go,” said Taylor, who clearly passed the test. One Pony Club event led to another and then to affiliated British Eventing horse trials, where he met and worked as assistant to the late Justin Llewellyn, a familiar voice on the circuit and until his death last year one of the regular commentators at Land Rover Burghley.

Taylor said: “Justin gave me a lot of help and useful tips and we worked well together. Thanks to him I became more involved and it was Justin who invited me to join the team at Land Rover Burghley.”

Initially, Taylor was one of the voices of the main arena – he even did the commentary when his mother-in-law, and cross-country sector steward, Sue Bealby, was presented with a long service award. Five years ago he was given his first Saturday stint commentating on cross-country day.

“I well remember my first time,” said Taylor. “The cross-country control cabin is quite small; it was full of serious looking people and the atmosphere was very intense.”

The cabin is not only for the commentators. Taylor explained: “Commentary is actually secondary to safety issues and the people in this area are in contact with the ground jury, starters, fence judges and medical and veterinary teams, who are instrumental in the safe running of the event.”

The information from around the course is received by the Controller, who plots the progress of individual horses and riders on a board similar to a Monopoly board, so that commentators know at any one time which fence any combination has completed and is approaching.

“From our location we see very little of the course and rely on the board and several monitors,” said Taylor, who also does his homework. “We all read rider biographies to refresh our knowledge and highlight particular points of interest. But we always have to remember that we are talking to a broad church of people, from those for whom Land Rover Burghley is their one event a year, to the diehard eventing community. At one end you are trying to get people involved and at the other giving information. We are also trying to keep people safe – reminding them about listening for whistles, crossing the course in the specified places and keeping dogs on leads – although at just about every event a loose dog will chase a horse.”

Aside from a calm and clear voice, what qualities does someone need in order to be able to communicate with such a large and live audience? “A commentator has to be reasonably quick thinking, especially during the stops on the course which are never easy and it is the commentator who has got to keep things going,” said Taylor. “And importantly they have to remain focussed on what the audience wants to hear, not what he or she wants to talk about in order to show off a record-breaking knowledge of the sport.”

Of course there is always the curse of ‘Coleman balls’, the verbal gaffs attributed to sporting commentators, waiting to happen. “With all live commentary things can go awry,” admitted Taylor. “Although I haven’t yet done one at Land Rover Burghley I did once announce a rider named Dawn as Dawn French – she clearly wasn’t, but at times the mouth can work quicker then the brain, the equivalent of predictive text perhaps.”

Clearly, however, the hidden horrors of the microphone hold no fear for Taylor who loves his weekend job. He said: “It’s most certainly not a chore and as well as Land Rover Burghley I am lucky to get to commentate at other events, also in beautiful locations, such as Bramham and Chatsworth. It is wonderful to be involved in the sport and a great honour to be at the hub.”