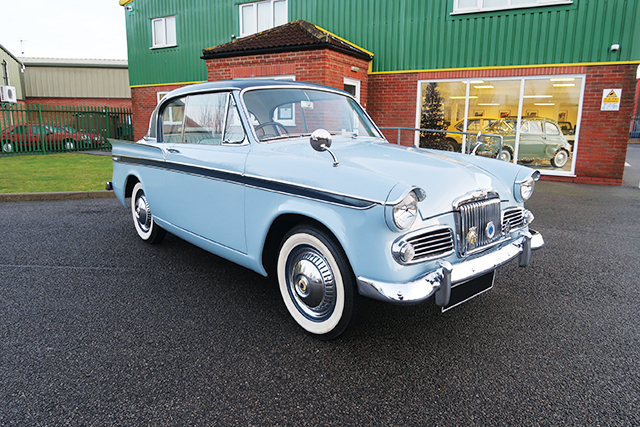 The Sunbeam Rapier from the Rootes Motor Group…

The Sunbeam Rapier was styled in the late 1950s to have the American look of that period, reminiscent of the Studebaker Hawk with two tone paintwork, large rear fins and leather look upholstery but built in the UK – so it still had ‘Old English’ charm.
At Woldside Classic and Sports Car in Louth we have a beautiful 1960 Sunbeam Rapier Mark 3, which is regarded by many as the definitive Sunbeam Rapier.

The Series III Rapier was introduced in September 1959, manufacturered by Rootes who made subtle improvements to the previous model which individually may have gone unnoticed but when combined considerably altered the car’s appearance. For example, the number of horizontal bars in each of the side grilles was increased from two to four and the boot lid acquired a rectangle number plate recess and surround in place of the square ones of the earlier cars. The most striking change though was the redesigned side flash, now narrower and lower down the side of the car with the Rapier script on its rear end. For safety as well as looks, there was a reduction in the thickness of the windscreen pillars and a lowering of the scuttle line to give a 20 per cent increase in windscreen area.

Mechanically, the Series III benefited from the success of the Sunbeam Alpine sports car, sharing the same 1494cc engine with new eight port aluminium cylinder head with twin Zenith carbs mounted on a new water heated inlet manifold. Increased compression ratio and redesigned valves with a new, sportier camshaft increased the power of the new model to 78bhp. New gear ratios and front disc brakes improved the car’s agility and stopping performance and according to Autocar’s roadtest of the day, 93mph was the top speed.

Our Rapier belonged to a local enthusiast who has cared for the car for over thirty-five years and the car can only be described as stunning! The owner was well known to two members of our staff who never even mentioned the car to us as they thought he would never part with it; luckily a friend made the business owners, Neil and Ian, aware that the car would possibly be sold and arrangements were made for a viewing. Neil was shown the car in a dry, heated garage covered with a blanket and connected to a trickle charger. When the cover was removed, he couldn’t believe the condition of the car beneath, needless to say a price was agreed and the car was soon residing in our lovely heated showroom.

We are offered many classics – some are good, some are average, but rarely are they as special as this Sunbeam. The car has covered only 22,000 miles from new with just 9,000 miles covered by the previous owner in the past thirty-five years, warranted by over thirty old MOT certificates in our possession. The condition inside and out is outstanding. The original two tone blue paint finish has a beautiful deep shine, and the fit and finish is one only found on an unrestored example such as this. Inside is equally as pretty with the original contrasting blue vinyl trim with dark blue piping and the walnut dashboard looking quite the part.

According to the website ‘How Many Left’ there have been only five Mk3 Rapiers taxed this year, so these cars are incredibly rare, especially in this condition.

You can see further photographs and a video of the car in action on the road at www.woldsideclassics.co.uk or call 01507 606725.