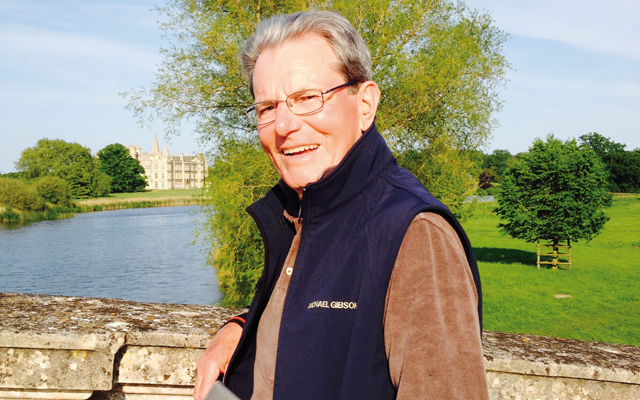 In the tough, challenging sport that is three-day eventing, the welfare of the sport’s stars – its horses – is paramount. Overall responsibility for equine welfare at the annual Land Rover Burghley Horse Trials falls to Veterinary Services Manager Michael Gibson BVMS MRCVS.
Michael holds the hefty responsibility of ensuring the smooth running of all things relating to horse health throughout the four days of competition – a job that requires an extremely cool head, given that some of the world’s most talented (and most valuable) equestrian athletes are competing.

Michael’s remit ranges from checking that all horses have the correct vaccinations and documentation upon arrival at the Event, to briefing the twelve strong team of vets. “My on-event role starts on the Monday or Tuesday of Burghley week alongside the resident vet, inspecting the identity of the horses as they arrive, making sure all horses are suitably vaccinated within the rules of FEI (International Equestrian Federation) competition and are in perfectly good health before entering the stable compound,” explains Michael.

From here the equine veterinary team starts to build and the slick operation begins. Seven horse ambulances and a further forty support team members make up this unit.

“We have a team of vets who come from all over the country and have a wide range of expertise. This ensures that we are best equipped to deal with whatever may come through the door,” said Michael.

Michael’s preparations, however, start months before the exhibitors prepare their stands and spectators fill the manicured grassland. A review of the previous year’s activities is vital to make any necessary adaptations or improvements to procedures or deployment, discuss treatments, and draw on recent research and lessons learned from other major sporting events.

“We start our review process around three months before the current event is due to kick off. It’s also when I start to book all the on-site equipment – portable X-ray machines scanners, a mobile laboratory and horse ambulances,” he said.

“At 8am on the Saturday we hold a briefing for the entire team which covers the communication processes that must be followed, the routes around the course and anything that may have changed from previous years,” said Michael.

For Michael it is vital to ensure that his team are prepared for any and every possible eventuality. “In the instance of a major incident on cross country day there is a lot of pressure – you are so visible on the course, even with the screens that we use, everyone is judging your every move. If there is an equine casualty we quickly examine it on the course, it is then loaded into a horse ambulance and taken down to our on-site veterinary clinic as quickly as possible, where it can be further diagnosed and treated.”

Michael ‘floats’ in between his strategically placed colleagues during the Saturday. “We usually place five vets in the various sections around the course, one in the start and finish boxes, two vets in the stables and an FEI Veterinary Delegate in the control box. Most of the team I work with have been doing it for five to ten years, so we know each other inside out now. Teamwork is so important at an event of this scale – there is a large amount of coordination required between the veterinary team, medical team and the connections to the horse in the case of an incident and it must be a seamless operation.”

The Land Rover Burghley Horse Trials has been a solid fixture in Michael’s life since he was a young boy and somewhat of a family tradition. “My father was the very first veterinary services manager for the horse trials and remained so until I took up the reins in the late ’70s,” he said. “I started off as a personal assistant to my father, doing anything I could to help. My earliest memories of the event include watching some of the equestrian greats such as the late Richard Meade OBE and Harry Freeman-Jackson.”

Michael cites the famous Cottesmore Leap as his favourite fence on the course. “It features an enormous ditch large enough to drive a Land Rover Discovery through – it is a fantastic galloping fence and marks the furthest point on course from the start. From here on out horse and rider combinations are riding downhill for home. It is a very impressive structure.”

A graduate of the University of Glasgow, Michael has specialised in equestrian veterinary medicine following a family tradition first established by his grandfather. His CV is impressive: a senior partner at Gibson’s Veterinary Hospital; chief veterinary examiner at the Doncaster bloodstock sales; a Riding Establishment Act inspector; President of the British Equine Veterinary Association; an official measurer and referee for the Joint Measurement Board; and a veterinary technical delegate at world and European showjumping, eventing and carriage driving championships.

Reflecting on his years at Land Rover Burghley, Michael said: “The Event has a tremendous atmosphere and there is a brilliant sense of camaraderie between the in-house team, volunteers and equine specialists. You can see why it is has grown into the mammoth fixture that it is – everyone you speak to loves the Event, whether it be to enjoy the sport or meet up with friends.”