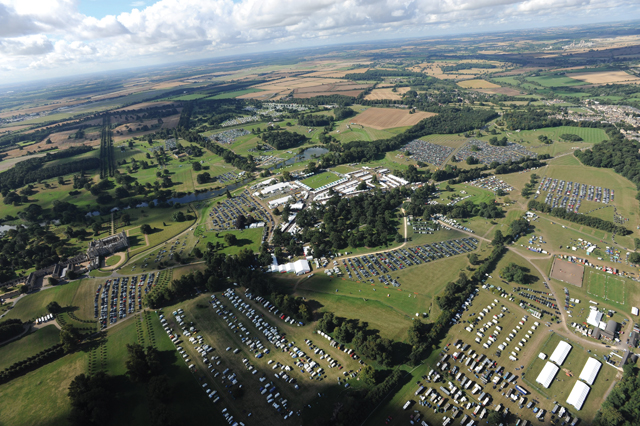 Behind the scenes of the sporting spectacular that is the Land Rover Burghley Horse Trials is a team made up of hundreds of volunteers, working together to ensure the success of the event. One of the linchpins of the enterprise is Lincolnshire based Tim Henson who acts as site steward.
Tim’s personal association with the Land Rover Burghley Horse Trials runs deep. His father, Bill Henson, was event director for sixteen years, retiring in 2003, while both his sister Lucinda and wife Lucy have been erstwhile competitors.
Despite these close familial links, during his school years the event didn’t feature much in Tim’s consciousness. “Probably my earliest recollection was watching my sister Lucinda compete. But the farm and farming were the things that really loomed large in my life at that time,” said Tim.

A short service commission in the army as a troop leader in Germany with the 17th/21st Lancers was followed by a stint in London. However, Tim’s heart lay in Lincolnshire and he returned to the county over twenty-five years ago, to found his own design, branding and manufacturing business Henson Franklyn, which he still runs today.

The move back to his Lincolnshire roots also saw Tim drawn once again to Burghley and he soon became a regular volunteer at the event.

“Initially I just helped out wherever I was needed,“ he explained. “Be that providing support for the trade stands or helping out at the fence judges’ briefings.”

However, Tim’s involvement gradually grew until he was invited to take on the mantle of site steward. It’s a position that requires organisational skills, unrivalled diplomacy, stamina and a strong sense of humour. However, Tim is keen to stress it’s very much a team effort.

He describes the role as overseeing “everything that doesn’t involved a horse” and is supported by a dedicated site team of six. They provide a crucial liaison point for all suppliers to the event, from plumbers and electricians to the fire brigade, cleaners and caterers.

“It’s our job to identify, prioritise and allocate miscellaneous tasks. But sometimes when everyone’s stretched we just have to roll up our sleeves and get on with whatever needs to be done,” said Tim. “It’s a role that requires organisation as well as improvisation, that’s why we work so well together. We all come from varied backgrounds with a range of skills, so there’s almost always someone on hand to solve a particular problem.”

Certainly much of the work is decidedly unglamorous, but generally absolutely essential. The team might have to organise dusting down the ‘trot up’ area or filling in holes in the walkways, to ensure that visitors don’t trip.

A few years ago when the weather was particularly wet, Tim ended up forking woodchip into a huge puddle, which had emerged in front of a trade stand. Tim recalled: “The exhibitor was understandably very concerned that the water would deter shoppers and wasn’t overly amused when I suggested he’d have to keep quiet about his new ‘lake view’ or risk incurring additional ground rent charges!”

There have been serious incidents too. On another occasion a new fence being located in the water under Lion Bridge led to an unprecedented number of visitors moving on to the bridge to gain the best vantage point. “The sheer numbers meant they couldn’t move forward or backwards and the situation could have turned critical at any moment.” said Tim. Fortunately serious consequences were averted and a security team was deployed to vacate the bridge, quickly and calmly without causing panic.

One regular feature of each year’s event is helping forgetful or disoriented visitors to locate their cars, which can be a time-consuming task at the end of a long day.

“Event days are very busy and the phone can go at any time,” said Tim. “Sometimes the job can be relentless and tiring, but it is crucial to remain positive and remember that everyone’s problem is important and needs to be dealt with properly.”

During the event Tim tends to work twelve-hour days arriving at around 7am and leaving at around 7pm. In fact for ten years he slept onsite, behind the office, in case there was an overnight emergency. But as he says, “there never was,” so he is now installed in somewhat more comfortable lodgings, a short walk away in Stamford.

Outside the event, horses continue to play an important part in Tim’s life. He is the director of the Festival of British Eventing, at Gatcombe Park in Gloucestershire and sits on the committee of Olympia, The London International Horse Show. He’s also recently returned to the saddle after a break following the acquisition of Irish hunter ‘Cluny’, purchased to enable Tim to accompany his wife, eventer Lucy Henson, and children Olivia (10) and William (8) on the hunting field after he became fed up with being left behind on the ground. He said: “We all hunt together as a family and it’s wonderful.”